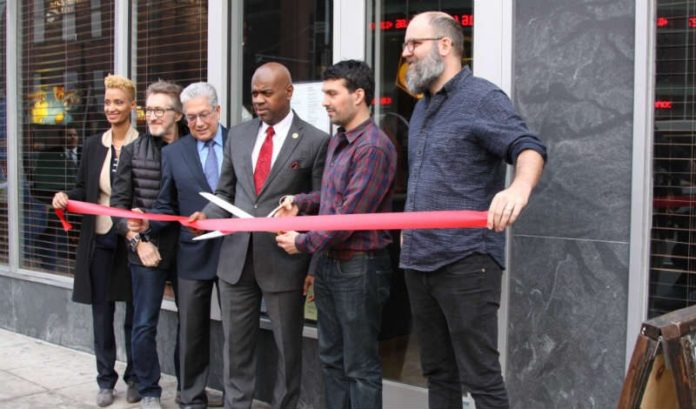 Pinballs were still being flipped and beer was still being poured as the city of Newark celebrated the official ribbon-cutting of Barcade on Broad Street on Tuesday.

Even Newark Mayor Ras Baraka got in the action while on site to participate.

“This is my second time here,” he said.” I’ve already played a few video games, went back into my childhood a bit — pinball is my favorite.”

Barcade, a combination bar and classic arcade, first opened in the Williamsburg section of Brooklyn in 2004. After directing the documentary “American Beer,” a 2002 profile of the emerging craft beer industry in America, and working as a production manager for The History Channel, Paul Kermizian opened the bar with three of his friends in the pursuit of steadier income. When Kermizian took on the role of CEO in 2011, he began expanding the brand to seven locations in four states.

“This is our seventh Barcade, our second in New Jersey, and we are very proud to be in this location,” Kermizian said. “We are very pleased and excited to be a part of the renewed interest and focus on downtown Newark. There is great history here and a great future as well.

“I want to thank the city for being easy to work with and the residents of Newark and the people who work here for being very supportive and enthusiastic of our work so far.”

Don Katz, founder and CEO of Audible, said he is thrilled to be Barcade’s neighbor.

“It’s been 10 years since Audible moved to Newark and, for much of that time, what we used to say was, we need a bar like Barcade across the street,” Katz said. “I had watched them become successful in Brooklyn, Chelsea, Philadelphia and Jersey City, and now, they are here.

“More than 500 Audible employees already have been in here, and we foot the bill, because that is what (business leaders) must do to make sure people come to (support). … (Barcade) will employ more than 28 people here, half of them from Newark — this is about creating equality in the city.”

Marc Berson, co-founder and chairman of Fidelco Realty Group, the Millburn-based developer and investor that renovated Barcade’s new home at 494 Broad St., said Barcade’s interest in Newark is indicative of so much more.

“This feels like the beginning of change, and it feels awfully good to be here to see it,” Berson said. “I spent some time a few weeks ago in Nashville, which has had quite the rebirth over the last few years, and it is very easy to envision Newark following in those same footsteps toward having a vibrant downtown.”

Barcade — located just steps from NJ Transit’s Broad Street station — is uniquely situated to draw its customer base from the growing Washington Park business and education community, including institutions such as Rutgers Business School and Audible’s Newark headquarters.

“We are trying to create a neighborhood downtown for residents and (visitors) in our city, so they can walk up and down the community and be able to go to different establishments. … We want to build something for young people that is fresh, exciting and cool, for artistic individuals that can come here every day to enjoy themselves and see Newark as a part of a growing social and economic ecosystem right here in New Jersey.”

Berson said that, while he often doesn’t use the word “cool,” as Baraka had, that is exactly what he envisions Newark to soon be.

“It is about something intangible that we are trying to create — and Barcade is highly representative of that, (as we) learn how to attract companies and people who are looking for that change,” he said.

“So, continue to come here to patronize this business and watch the city continue to grow, and thank you to the owners of Barcade for choosing the city of Newark.”

Aisha Glover, CEO and president of the Newark Community Economic Development Corp., admitted that, while her organization helped Barcade get on its feet, it had no part to play in attracting it to the city.

“I frequently joke that, whenever we do not have as much of a hand in opening a new business, that’s exactly the way that it is supposed to be,” she said. “We want the buzz to be happening on its own, we want business to be looking at Newark as the next city to expand in and we want developers and the corporate community doing their own outreach to talk up the city.

“So, I actually appreciate that we had very little to do with this project.”

Glover said that, while she has frequently visited Barcade in Newark prior to its official ribbon-cutting, she was still thrilled to be there to make it official.

“Even though Barcade has been open for a few months now, it is never too late to celebrate the opening of a new business,” she said.

Goya Foods donates 300,000 pounds of food to Catholic Charities of...