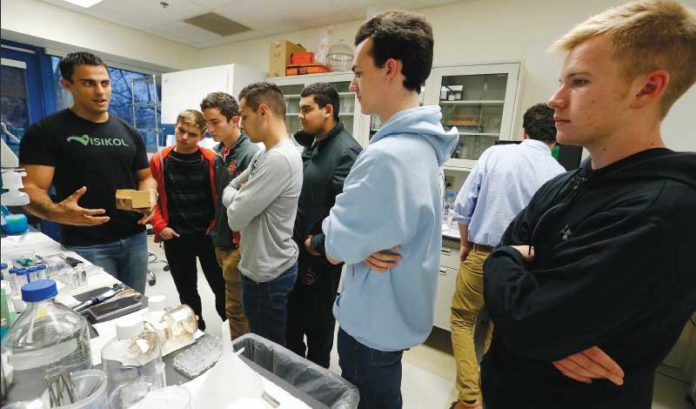 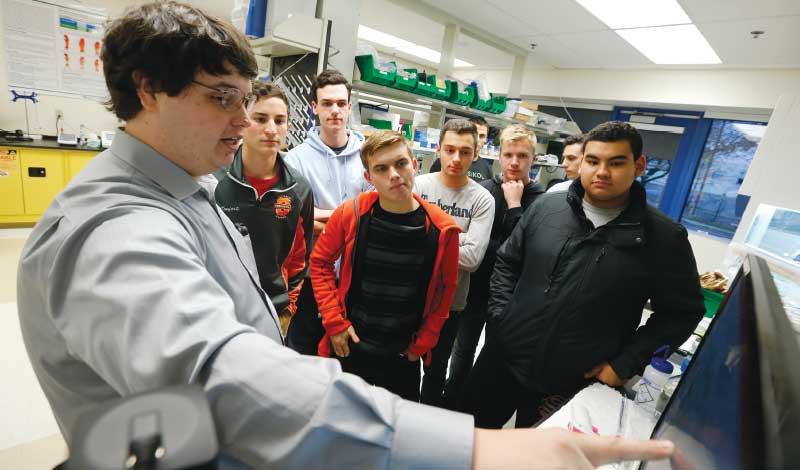 Going from trusting teenagers with the family car to having confidence in them to run robotics and more in a New Jersey biotech lab — it’s a big step.

But a new startup, Visikol, has found good reasons to hand over the keys.

The biotechnology firm has been marketing a novel way of rendering biological specimens transparent to the pharmaceutical sector since its launch last year. But the company has other ideas; and Visikol CEO Michael Johnson said high school students have been vital from the start in helping realize them.

“Early on, we knew we had a lot of interesting projects we just wouldn’t be able to get to, due to limited resources and manpower — things that weren’t necessarily mission-critical but definitely helpful if someone worked on it for us,” he said. “That’s when the idea of partnering with local high schools came up.”

Long before becoming an entrepreneur — one recognized on this year’s Forbes 30 Under 30 list — Johnson had an inspiring education at Somerville High School. That local public school has a four-year engineering program that provides students with a background in digital electronics, 3-D printing and other modern engineering skills.

So, when looking for young talent to work on some side projects at Visikol, Johnson’s natural thought was to reconnect with former mentors. He reached out to Michael Kydonieus, who runs the engineering program at Somerville High School, about opportunities for qualified students.

But the reason Visikol has continued working these younger students is simple — the company grades them a step above their older peers.

A lot of local companies in the broad area of the sciences have interns from the college level. In comparison to those students, Johnson said, high school students have demonstrated in the half-dozen projects they have done with Visikol that they’re of a higher tier and intrinsically motivated.

“Undergrad students, understandably concerned about student loans and other factors, are interested in what they’ll be paid, how many hours they’ll be working, whether they can get a job out of it,” he said. “They lose track of the project.”

Not only do high school students have the same requisite skill set, but Johnson said they also have proved themselves to be accountable and willing to go above and beyond.

“One time I was traveling (in California), and they called me one morning to give me a status update on where they were at with the project,” he said. “That’s something incredibly proactive. That level of personal investment is also something that other students, especially undergrads, have never done in my experience.”

The long-term projects students work on with senior executives at the startup are not core client projects, but often tools for making the company’s laboratory operations more efficient.

“As an example, if we need a robot that can automate certain things in our lab, that would either cost us $50,000 or even $80,000, or we could buy a used one and have a student reprogram it so that it can do what we want for much less,” Johnson said.

There are different groups of students that Visikol works with at any given time. Right now, it has a student team working on a liquid transfer robot that will automatically stain tissue samples used in research.

Last summer, Somerville High School students even helped develop prototypes of a special microscope that could image tissues such as cancer biopsies in 3-D. While it’s not ready for the market, one day it might be … an advance created in its earliest form by scientists barely old enough to drive.

“For their efforts, the students get real-world experience and references to leverage for college applications or even later jobs out of this,” Johnson said. “It’s invaluable for these students. And you can’t put a price on the passion they have for it.”

From academia to the lab

Visikol was founded in 2016 with the backing of Foundation Venture Capital Group. But its actual launchpad was research several years earlier by the company’s chief scientific officer, Thomas Villani, while he and the company’s other co-founders were still doctoral students at Rutgers University.

Villani’s interest was developing an alternative for a traditional plant clearing agent, chloral hydrate — used to turn plants transparent for better examination under a microscope. That substance is a regulated narcotic, which made its use on campuses complicated. The resulting development became the core technology that Visikol would try to build off of.

Even as Rutgers — under its current president, Robert Barchi — has pledged to revamp its operating model to better bridge the divide between educational institutions and the private sector, some legal challenges remain in moving from one side to the other.

“(But Rutgers) did support us, and we’re set up for growth of our own now,” Johnson said. “We have a goal to become a leader in this space and a point of contact for pharmaceutical companies when they have complex problems that need to be solved.”