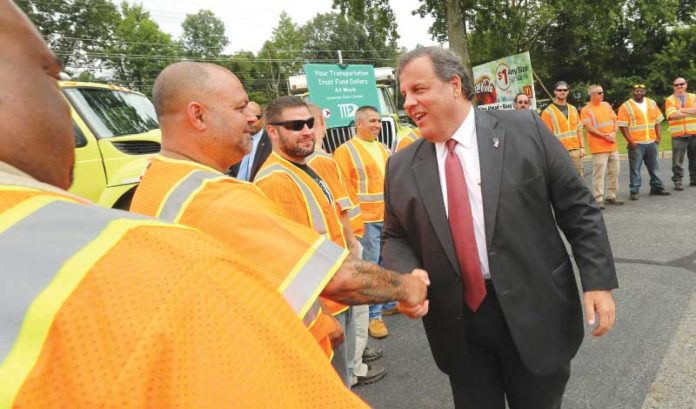 The question appears to an easy one: A union leader must be thrilled to finally be rid of Gov. Chris Christie, who seemingly made battling the unions one of his top priorities since the first day of his administration eight years ago.

Greg Lalevee, the business manager for IOUE Local 825, isn’t so sure.

He acknowledges that Christie and the unions haven’t always seen eye to eye. But, taking the administration’s overall efforts, Lalevee said he is not ready to trash Christie’s time in office. In fact, he said the governor has done a lot of good for the unions and for the state.

“I’ve got that question before: Break down Gov. Christie’s eight years in office, and it’s phrased in a way that he failed at this and failed at that,” Lalevee said. “I’m not so sure about that.

“This organization relies on transportation infrastructure building to thrive. From 2012-2016, our man hours are up 30 percent.”

Lalevee notes Christie managed to get this done despite the fact his administration started at the end of the economic downturn and then faced Superstorm Sandy, what he calls two “cataclysmic events.”

“In 2010, if you said he could get pension and benefit reform, he could get the estate tax eliminated, better tax rates on seniors, get the Transportation Trust Fund done, you wouldn’t believe it,” he said.

Lalevee applauds much of Christie’s record on infrastructure, starting with the raising of the Bayonne Bridge, which he says has spurred the economy.

“I believe Port Newark is the No. 1 job epicenter in the state; I believe it runs this whole engine,” he said. “Being able to accept the post-Panama ships, being able to keep the port thriving, is a necessary component to this state’s economy, and I think the will to get it done and the speed and the vigor in which Gov. Christie went after it was laudable.

“We see specific projects; different terminal operators are increasing their capacity. There’s all sort of downstream private investment to accept this now-anticipated heavier cargo load. Couple that with the widening of the (New Jersey) Turnpike between (exits) 6 and 9. You now have warehouses, private investments, popping up like weeds now between (exits) 14 and 6.

“The connectivity of infrastructure, when you look at those pieces, is so profound you can see it. For anybody in the logistics business, the real estate business, you can look at those projects and say, ‘Wow.’”

Lalevee argues Christie’s tenure will be view more favorably down the road because of these efforts.

“People can argue with the underlying mechanisms, but I believe in Christie’s time we got a governor who got us to a state of equipoise in Port Authority spending that I don’t think New Jersey ever got before,” he said. “He really dug in and lobbied for serious dollars over here, for good places. This was more than necessary and long overdue.”

And he credits Christie for moves to update services.

“Look at all of the upgrades Public Service (Enterprise Group) is doing in northern New Jersey on the gas system; that all went through a Christie-appointed (Board of Public Utilities),” he said.

“Whether it’s the port, transportation, logistics and tourism, I think, during his time, when you look at the major economic components of this state, he did what a governor is supposed to do, he tended to those.”

Which leads us back to the questions about Christie.

“When I get the question, he failed in mass transit and rail infrastructure, I agree, but I think that’s a very narrow way to look at it,” Lalevee said.

“I think the hard part for any politicians when you have terms limits is, you don’t see the fruit of what you do until you’re gone. I think in the case of Gov. Christie, I think there’s a lot of good things that he did there. I don’t think he deserves the poll numbers he’s getting.”

Let’s be clear, Lalevee said, he isn’t all in on Christie and he welcomes Gov.-elect Phil Murphy’s strong support of unions.

And Lalevee said there are plenty of areas in which he disagrees with Christie. He just said the governor’s record deserves a fair look.

“Maybe not all his attitudes or policies to unions are good,” he said. “But when we can talk about work hours up 30 percent, that allows us, as an organization, to bring more people in. More people now have the middle-class lifestyle that being an operating engineer provides; this is all downstream effect.

“When you look back at his time, I think he did well by us.”