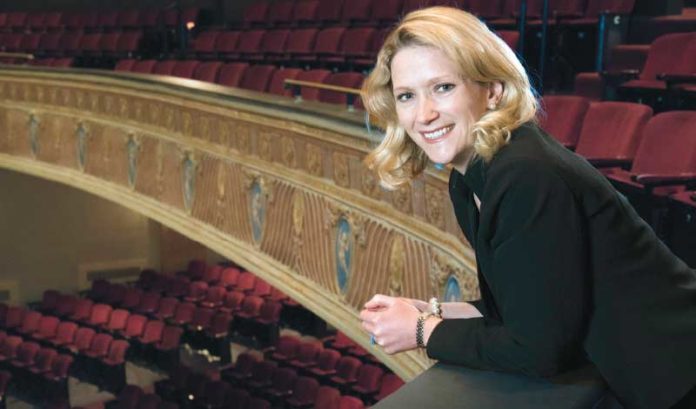 Anna Marie Gewirtz, once herself a professional musician, followed her passion to success.

Now, she works to encourage others to do the same.

“We have a very strong mission to serve our community by providing the arts and arts education that they are most interested in,” she said.

Gewirtz, a career director of various arts and nonprofit organizations, joined the State Theatre New Jersey in New Brunswick in 2013 as the vice president of development and strategic partnerships before becoming the senior vice president and chief of external affairs.

In September, the board of trustees announced Gewirtz as the acting CEO and president, following the departure of Thomas J. Carto.

“I look at my opportunity to work in the performing arts as a true blessing,” Gewirtz said. “I come to work excited every day to do my job, and I take the time to see as many of our performances as I can, because they feed my soul and remind me of why all this hard work really matters.”

ROI-NJ spoke with Gewirtz to learn about her new responsibilities and why she encourages the business community to consider more frequent partnerships with the arts.

ROI-NJ: You studied and performed music all throughout high school and your early career. What ultimately led you to a career in arts administration?

Anna Marie Gewirtz: I started performing professionally at the age of 15, playing piano and singing, mostly jazz. I also played the French horn and graduated from The Juilliard School with a pre-college degree in that. I then attended the Mason Gross School of the Arts at Rutgers University as a French horn performance major and ended up broadening my horizons with a dual major in political science and a fundraising internship with the National Alliance for Excellence.

Upon graduating, I did become a full-time musician, performing five nights a week in a hotel lounge, which was really fun. But I knew I wanted to make a bigger impact than just playing and singing Billy Joel and Elton John songs to 200 people in a lounge every night.

So, I started working in the programming department at the New Jersey Performing Arts Center during the day and went back to Rutgers Business School to earn my MBA in Arts Management and Marketing. … I then began working for the Caucus Educational Corp. as the director of development and marketing … before I went to the Alvin Ailey American Dance Theatre for three and a half seasons to head up their corporate and foundation relations department. … I was then recruited by the Liberty Science Center in Jersey City to become the director of the individual giving department. … (But) I found I was still going to Juilliard and Lincoln Center and Carnegie Hall all the time to see performances. I really missed being in the arts and felt an incredible tug on my heart to be back working in it.

So, when I got the phone call nearly five years ago to come to the State Theatre, I frankly fell in love with it.

ROI: How have you and the State Theatre been working to build up the organization since your appointment as acting CEO and president in September?

AMG: The question always is, how do we get people to come to the theater for the first time? Then, how do we get them to become multi-ticket buyers? Then, how do we turn them into subscribers, donors or investors? We look to that patron-loyalty continuum to learn how we can continue bringing people in at whatever level works for them.

The onus always is on the institution to get to know their patrons and to personalize their offerings. Just like you may see on Amazon where, if you bought this, you might also like this, our institution also is looking at ways to say to our patrons, hey, we know you really like this kind of performance and we think you also would really enjoy this show. Then we provide them specific offers to see it. We need to keep making it that much more personal and compelling to retain our patrons. …

We also have very successful outreach committees for the lesbian, gay, bisexual, queer and transgender, Latino, African-American and veterans communities that we work with to gain advocates and intentionally build our audiences to spread the word of who it is we are and what we do. We are becoming that much more intentional about opening our venue to the community and making it accessible and enjoyable for all.

ROI: How do audiences in New Jersey typically respond to this sort of diverse offering of live performing arts?

ROI: I imagine that can be both a blessing and a curse when it comes to fundraising and attracting audiences.

AMG: Everyone is competing for that person’s entertainment dollar as well as for their time and attention. It is a very crowded marketplace compounded by the fact that we are so close to New York City and Philadelphia and compete with places like Atlantic City in the summer. While we are a very arts-friendly state, exhibited in the number of arts organizations that can stay in business here, every single one of them is still trying to capture and retain their audiences by offering interesting programming that will make them choose their institution most, if not every time.

So, both on the individual as well as on the corporate and foundation levels, funders are becoming much more strategic and intentional with their dollars. They will ask a lot more questions.

ROI: State Theatre New Jersey has been highly successful in developing corporate partnerships with businesses within the community, such as Horizon Blue Cross Blue Shield of New Jersey, Investors Bank and Robert Wood Johnson. What advice would you have for other nonprofit organizations who wish to do the same?

AMG: While the New Jersey State Council on the Arts and the Middlesex County Board of Freeholders are major funders of our arts programs and offerings, we also partner with many different companies, many times at the $50,000 level and above. Johnson & Johnson in New Brunswick, for example, is our largest corporate partner.  …

There are many different reasons why a company would want to support a nonprofit, but it often is a mistake to presume that a corporation will want to work with you. It is up to you and your organization to find those key areas of alignment and make clear to a potential partner that you are willing to customize your proposal and offerings to also meet their business and marketing needs.

AMG: We are currently in discussions with the New Brunswick Performing Arts Center and other local arts groups about how we can partner on things such as guest services and ticketing in the future. There will be opportunities for us to partner.

However, we also are in the planning stages of making some improvements to the State Theatre. We are coming up on the centennial of the building in 2021 and we want to ensure it stays strong and is a vibrant community hub for the performing arts for the next 100 years.

But it is not simply about the intrinsic value of the arts. Over the next 20 years, our economic impact will equal more than $1 billion. Each pair of theater-goers spends almost $100 each in our community. More than 200,000 people come through our door annually, and they’re not just purchasing tickets. They’re parking their car, they’re going out to dinner and shopping at local retail stores beforehand, they’re getting drinks afterward, they’re staying at our hotels — yes, people come in from out of state and spend a good amount of money in this area to see our shows, but, honestly, it’s even more exciting that we have people who will come in from all over New Jersey to spend their entertainment dollars in New Brunswick.