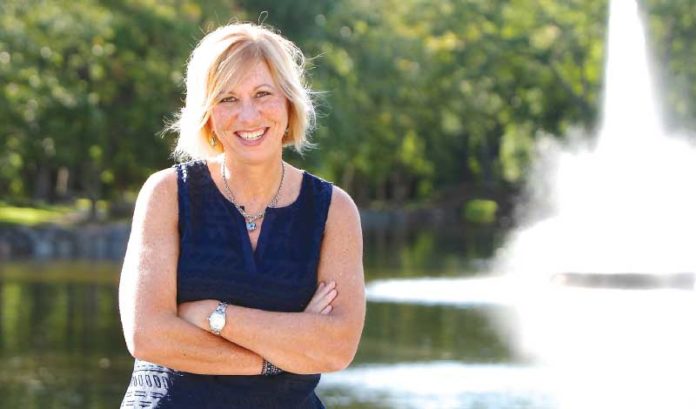 Westfield Mayor-elect Shelley Brindle, a former C-suite executive at HBO, sees many parallels between the town she is about to lead and the media giant she helped modernize.

She has been credited with creating the vision that led HBO to launch HBO Go, largely based on the success of the “Game of Thrones” series.

“I think I won the most votes on that alone,” she said, only half joking.

“It was a popular point (during the campaign).”

Entering politics was not something she envisioned, but, after retiring from HBO — and therefore a daily commute to New York City — after 25 years, Brindle began a new path of work.

This new schedule allowed her to spend more time in the town she lived, and inspired her to run as a Democrat.

Initially aiming for a council seat, she was asked to consider running for mayor when the incumbent declared for an unprecedented fourth term and was running unopposed.

ROI-NJ: What about the town’s politics first inspired you to consider running for local government?

Shelley Brindle: I realized being able to be here on a Wednesday morning that our town was different when no one was in it. I felt like I was seeing it with fresh eyes even though I lived here for 23 years. I saw the issue with downtown vacancies. I felt like a tiredness had set into our community in a way that I recognized, and so I had an “aha” moment. I was going around (in post-retirement) talking to all these people to maximize their potential and build cultures of growth and innovation, and maybe the best way to leverage that was in my own community. I started paying attention to how the town was run and what decisions were being made.

ROI: You initially decided to run for council before someone suggested mayor. Why did you change your mind?

SB: When I heard the mayor was running for a fourth term, I was waiting for someone to step up, and, in a way, that was really meaningful. In our local politics, there is a general sense of complacency among the electorate because our races aren’t very competitive. Someone put forward would I consider running for mayor. I wasn’t ready for that level of commitment, and I was concerned that I wasn’t a politician and hadn’t run before. Then, my 18-year-old daughter told me I can’t be thinking about winning, I have to think about making a difference. When your 18-year-old daughter says that to you, and, as someone who is focused on empowering women, I knew what I had to do.

ROI: How did you launch your campaign, not having any prior experience doing so?

SB: It was like running a startup company with no resources and no background. We ran a very modern campaign, very social media driven, very conversive and with a lot of young people behind it. We had about 50 high school kids volunteer. I wanted my campaign to reflect the type of mayor I would be — very present on social media and transparent.

ROI: Your victory was a significant one for many reasons, among them defeating a Republican in a Republican stronghold — one filled with a number of high-profile Republican leaders and a seemingly entrenched mayor. How did it feel campaigning amid such recognizable names?

SB: I wish someone had told me before I ran. It wasn’t until an article in August listed all the Republicans (in Westfield) — (Assembly Minority Leader John) Bramnick, (Senate Minority Leader Tom) Kean and (top strategist) Bill Palatucci — that I realized. And I didn’t realize it was a key Republican district. I had no idea. It’s probably better. If I knew how hard it was going to be, I would never have done it. But I’m glad I did.

ROI: Do you feel your win was in any way a reaction to President (Donald) Trump’s win last year?

SB: I did see people say that it was in reaction to Trump. But I think what that election did was inspired good candidates to run. I don’t like it when people think it was just the Trump effect. It diminishes the accomplishment of the people who won. The effect was just getting good candidates to run in the first place. I am one of them. I never would have considered running for office. I was, like so many people, happy to write the check and leave the hard work to other people. But I realized at some point you can’t do that.

ROI: Do you see any parallels between running a huge media company and the township of Westfield?

SB: Westfield reminds me of HBO in 2010 when I had to convert (it). I had inherited an organization that had been there a long time and always done things a certain way and been successful without working hard because of its legacy. Back when there was this tiny competitor on the horizon called Netflix.

(I learned) it’s about taking the talent that you have and making sure it is being leveraged in the best way and that culture enables people to take ownership of the outcomes. The brain trust in this community is off the charts. And they are not engaged, because they don’t want to be. I don’t think they have been appropriately asked before. For example, we opened applications for the various boards and commissions for the first time. And what was normally just political appointees attracted more than 400 applications and the talent is unbelievable. It is jaw-dropping.

I don’t really care what political party people belong to. It just matters the relevant experience they have to help the community. I have to have the answers as the mayor, but the solutions and talent lies in the community. My job as mayor is to activate that talent for a specific mission. I see the mayor as a bottom up rather than top down approach. That was my same experience at HBO and helping to launch HBO Go. That’s the parallel I see.