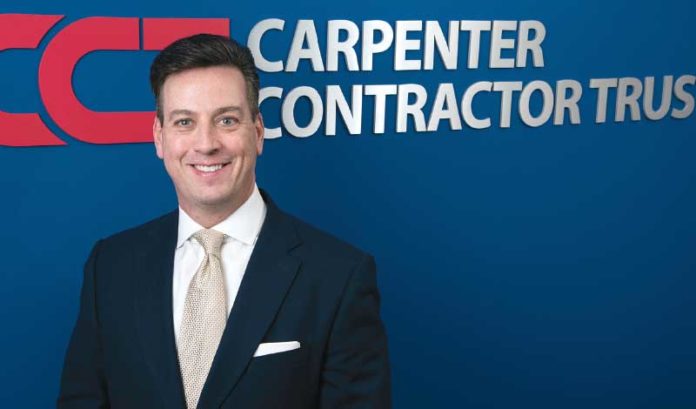 Kevin McCabe is quite busy these days.

As the president of the Carpenter Contractor Trust, he is responsible for the daily execution of goals by the board of trustees, as well as overseeing and implementing a rebranding marketing effort the union began five years ago — one aimed at showing this is a new union for new times, one eager to work as economic development partner for businesses and governments.

As chairman of the Middlesex County Democratic Organization, he helps oversee one of the most important county caucuses in the state — one that has seen two members recently land key positions in state government, as Assemblyman Craig Coughlin is set to become the next Speaker and Metuchen Mayor Pete Cammarano is serving as Gov.-elect Phil Murphy’s chief of staff.

McCabe also recently was nominated to serve on the board of the Port Authority of New York and New Jersey at a time when it is preparing to be involved in major infrastructure initiatives.

And then there’s his home life. His wife is expecting their second child in 2018.

ROI-NJ caught up with McCabe last week. Here is a bit of our conversation:

ROI-NJ: Let’s start with your work at CCT, the marketing arm for union carpenters and contractors in New Jersey. The union has been in a transition period as it adjusts to the modern needs of the workforce and the economy, something you spearheaded five years ago. Give us an update. How is that going?

Kevin McCabe: We’re five years into our efforts to reposition our union with marketing and rebranding efforts. Rebranding takes time; it has to be constant and consistent. But we believe we have been able to change the mindset and the perception of how the carpenters and union carpenter contractors are viewed by the public, by elected officials and by businesses.

There are stereotypes, and have been stereotypes for decades, about how people view labor and, in our case, carpenters. That has changed over the last decade. The carpenters and our union contractors have become a much more flexible partner within the industry; we’ve become more diverse. We recognize that the market has changed, and we are more of a partner to ensuring development within the region. We feel we are part of the economic development process.

There have been examples, especially since the recession, when the leadership of the carpenters and union contractors recognized that the old way of doing business has forever changed and that paradigm has shifted. They have been flexible in the use and allocation of their resources, literally putting financial resources in helping get projects off the ground, especially when the credit markets were frozen. And we have been able to work with developers to complete their jobs done on time and on budget. If that happens, they win and we win. It’s a good story. And we’re excited about moving into the next phase of that rebranding effort.

ROI: More than just the mottos and models of the union has changed. CCT has been one of the leaders among unions in diversifying its membership, a necessity to survive and thrive in this multicultural state. How were you able to do that?

KM: The carpenters have been out on the forefront of the building trades toward understanding the demographic shift that has taken place in society and how it impacts future members. We are no longer reliant on recruiting from grandfather to father to son. The carpenters have been very active and successful in attracting new partners and identifying a new pipeline of recruitment to bring into our apprenticeship program.

We entered into a very unique agreement with the Puerto Rican Association of Human Development. It’s between our organization and PRAHD, there is no third-party entity, such as a nonprofit or a governmental entity.

And the Sisters in the Brotherhood, which started as a pilot program in Northern New Jersey Local 253 five years ago, is now a regional program. The success of the program through pre-apprenticeship program and the attraction of women into the union have been very successful.

Through those relationships that we have been fostering, we are seeing steady progress in diversifying. It takes time. Those numbers don’t change overnight. But our leadership recognizes it’s one of our most important issues. At the end of the day, our strongest asset for both the union and the union contractor is a well-educated, well-trained individual. We need to make sure that we are identifying the right people across a broad spectrum.

We have been very active in marketing that effort. We did a 13-week cable buy from Buffalo to Philadelphia, where the ad was ‘one union, many faces.’ That’s what we are about.

ROI: All the effort you have put into marketing has come with some free help, too. Gov.-elect Murphy repeatedly has pledged to make unions a big part of his plans for the state. How much can he help the unions?

KM: The governor-elect has been very vocal in his support and has said multiple times in front of many different groups, not just union groups, that, for our economy to be successful, the backbone of that success is going to come from organized labor. We’re very encouraged to work with him hand-in-hand toward achieving that goal. He also has talked about putting together a true economic development plan, and that’s exciting for us. We need to have a governor who understands that if we’re working, New Jersey’s working.

ROI: The biggest potential project on the board is the Gateway Tunnel, or the building of two new tunnels for train service to New York. If the project moves forward, and by all indications it will, you will have a close view of the effort since you were chosen to join the board of the Port Authority of New York and New Jersey. What does that appointment mean to you?

KM: I’m honored by the appointment and look forward to the challenge. I think we all recognize that we have a lot of challenges ahead of us when it comes to dealing with infrastructure within this region. But it’s a challenge I embrace.

I look forward to representing the CCT, as I always do. And I look forward to being an advocate, not only for the Port Authority region, but also the residents of New Jersey and carrying out the vision of the incoming Murphy administration.

ROI: Mixing business and politics has long been a part of your day. Middlesex County has long been one of the most important and influential in the state. As the county chair of the Democratic Party in Middlesex County, you must be thrilled by the big roles members of your caucus are taking on with Assemblyman Coughlin set to become the next speaker and Mayor Cammarano serving as Murphy’s chief of staff.

KM: We always have viewed Middlesex as being integral, not only politically, to the overall paradigm and dynamic for New Jersey. We’re certainly at a crossroads in this state between North and South and we have some extraordinary assets, such as the state university, terrific local and county leadership, and 10 members of the Assembly and four members of the Senate who caucus with us. With those assets come responsibility, and our delegation takes that very seriously.

The fact that we have strong relationships that transcend geographical boundaries is what I believe has enabled Middlesex to once again be a part of the narrative of the governmental and political dialogue of New Jersey. We’ve had a great relationship with Mayor Pete Cammarano and certainly Speaker-elect Coughlin has a very strong track record within his eight years in the Assembly that I believe will serve his caucus and the residents of New Jersey very well. And we were strong and early supporters of the governor-elect.

We are very mindful of our role, and we take it very seriously. We are excited to be a central part of trying to ensure that New Jersey is going to be on the right path going forward and we certainly have the talent and leadership to help achieve that goal, starting with Speaker Coughlin.

No progress on rules/regulations for adult use of cannabis