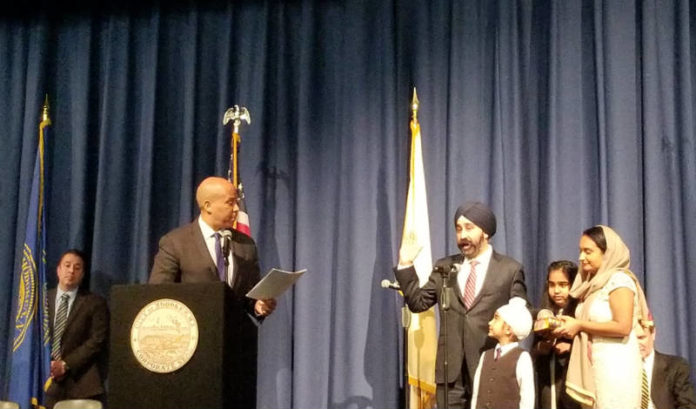 That means, among other things, a promise to end SantaCon, an annual bar crawl Bhalla said has become a menace to the community.

“Last December saw the return of the annual so-called SantaCon bar crawl,” Bhalla said. “I find it completely unacceptable for people to come into Hoboken, put our police officers and emergency management personnel in harm’s way, obstruct the ability of local businesses to thrive during the busiest season of the year and prevent residents from safely carrying on daily life.

“All this, at the expense of thousands of dollars of taxpayer money used for no other purpose than to enrich pockets of a few bar owners. So, as mayor, I will not let a commercial enterprise like SantaCon … ruin our city for a day, or even an hour. To address this issue, I am hereby forming a task force comprised of police, fire, emergency management officials, together with local business leaders to develop and execute a plan and strategy, within the first 100 days of my office, to put this menace to an end once and for all.”

Bhalla, speaking to a crowd of more than 500 at his inauguration ceremony on New Year’s Day, also announced the launch of an office of constituent services at City Hall that would be open during and after business hours and respond to residents’ issues.

He said he will be focused on the fast-paced urban growth in the region and ensuring that it is paired with infrastructure improvements.

Grewal served as Gov.-elect Phil Murphy’s surrogate at the event.

Grewal, also a turban-wearing Sikh and a lifelong friend, said he already has witnessed how much Bhalla has been embraced by the community.

He jokingly recounted his experience of being mistaken for the new mayor on his way to a speaking event at Stevens Institute of Technology a few weeks after Bhalla’s win.

“Hardly a block went by without someone stopping me, saying, ‘Congratulations, Mayor,’ and offering me their best wishes,” he said.

“So, Ravi, I did what you would do … I played along with that. I answered questions about parking on Washington Street, and I committed Ravi to more open spaces, while holding the line on taxes.

“I’m kidding, of course. I was stopped a number of times, and did discuss parking on Washington Street, which is an issue for me.”

Grewal congratulated Bhalla on his win, on behalf of Murphy, and as a proud friend whose public service career was inspired by Bhalla.

Bhalla’s win has been hailed as a win for the Sikh community, which, despite existing in the country for over a century, has been invisible on the political radar until recent years.

Some of the region’s most prominent Sikh-American figures attended the inauguration, including Lt. Col. Kamal Singh Kalsi, the first Sikh to wear a turban and serve in the U.S. military after rules changed in the 1980s, as well as Simran Jeet Singh, a professor who has become an authority on Sikh awareness and advocacy.

Grewal added Bhalla’s name to the list of history-makers by saying that his win in the 2017 election signals to children of Sikh-Americans, “that no matter how difficult it may be to maintain your unique Sikh identity in this country, you can do so and you can thrive. That there is simply no conflict between your faith and the success you can achieve.”

His sentiments were echoed by the state’s first minority member of Congress, Menendez, as well as his fellow senator, Booker.

“I’m thrilled to be at home, to be in a place like Hoboken, where we reject the politics of division and intolerance, and embrace the politics of inclusion and diversity,” Menendez said. “Much has been made about Ravi being a Sikh, but if you know about the tenets of Sikhism, you actually know that some of those tenets have a call to service … of selfless service to others, of equality of all human beings.

“That is going to serve you extraordinarily well as the mayor of an incredibly diverse city.”

Booker told the crowd that Bhalla’s win was a win for all minorities, just as his and Menendez has been for the state. New Jersey is the only state where both U.S. senators are minorities.

Booker said the moment is another milestone for diversity.

“This country started in a time of great bigotry,” he said. “Some of the founding documents refer to Native Americans as savages. But the founders understand this country was like no other.

“I know some people want to read this as a narrow victory for a certain community. The first Sikh-American, and everyone thinks it’s about the Sikh community. When we elected the first Catholic president, that wasn’t a victory for Catholicism. That was a victory for all of us, for the United States of America living up to its ideals.”

“This first executive order is a reflection of our quintessential American values and sends an unmistakable message that Hoboken is a place that welcomes all who are ready, willing and able to contribute to our great city. We have challenges big and small to overcome in the years ahead, and we can only do that when our community works together in good faith towards a common goal.”