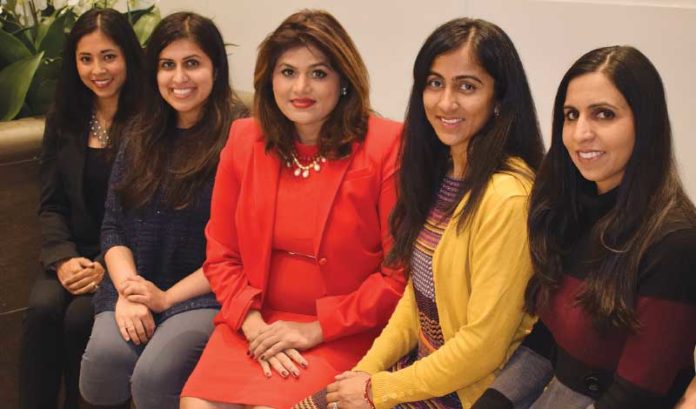 Ayesha Hamilton is a living statistic.

A lawyer by day, Hamilton was asked three times to run for a seat on West Windsor’s city council — a governing body of which she had never attended a meeting — before agreeing to do so.

With that, Hamilton became the personification of a belief that originated in California a few years ago: that women need to be asked, or convinced, three times before they run for office or take a role in leadership.

Today, a growing number of South Asian women in New Jersey have been doing so without being asked, some with success and some without.

Rekha Nandwani, for example, ran and lost for city council in Jersey City this year. She had worked behind the scenes with city government for years, and felt it was time to take the next step and get some credit.

But getting credit is still an uphill battle for South Asian American women.

“I think historically, South Asians have been disconnected with politics, but South Asian women even more,” Hamilton said.

There has been a frustration in New Jersey over the lack of attention given to South Asian women in office, compared with their male counterparts.

When Vin Gopal won state Sen. Jennifer Beck’s seat and Ravi Bhalla was elected mayor of Hoboken in November, it was big news.

Some have said South Asian women in politics seemingly remain invisible from the media’s eyes.

“I think that … like in many other sectors, women do a lot of the work, but that labor is not recognized,” said Khyati Joshi, a professor of education at Fairleigh Dickinson University and the co-chair of the New Jersey Democratic State Committee’s South Asian American Caucus with Satish Poondi.

“(Poondi) is great,” she said. “We have a wonderful relationship. … We both work hard for the caucus, in different ways. Both are time-consuming, and he’s often been the one recognized as the co-chair, and they just conveniently leave the other co-chair out.”

Part of the issue, Joshi feels, is that she is unable to attend some of the same meetings her co-chair does.

“Be it geography, be it timing, be it I’m giving a lecture because I’m a professor,” she said. “I don’t know, the schedule always seems to work for men.”

But there are other barriers.

“In the South Asian American culture, there is the understanding the woman will support her husband and (his) ambitions; you don’t always find it in the reverse,” she said.

Which is why a group of 13 women came together to launch the nonpartisan Inspiring South Asian American Women nonprofit in September.

Gill and Joshi are board president and vice president, respectively, of ISAAW. Though neither holds public office, they are focused on ensuring the women who do have a platform to engage and network with others who are interested.

Hamilton, who is also a part of ISAAW, said the biggest issue with women in public office or involved in civic engagement — also a goal of the group — is not a unique problem to South Asian women.

“The lack of attention to our success is probably our fault,” she said. “It’s a branding issue.”

Men are generally better at promoting themselves and have greater support when they do so, she said.

“To me, it’s a woman issue rather than a South Asian issue,” Hamilton said.

What they are doing right is what Lt. Gov.-elect Sheila Oliver, who spoke at the ISAAW kickoff event, and the Latinas United for Political Empowerment group have done and advised — galvanizing their base and overcoming the community challenges.

While there are groups like Emerge NJ or Rutgers University’s Ready to Run training women for office, there are fewer options for minority women who want to band together to become a stronger force.

“If they don’t know about us, how are we part of the pool?” Hamilton said. “There have not been enough women around us to be pushing the women forward — it’s a numbers game.”

ISAAW is not a political action committee, but it serves as a networking site for those interested in politics, policy and civic engagement overall.

LUPEPAC, the political action committee that is an arm of the LUPE organization, has been around since 2009.

It was instrumental in getting the first and only Latina mayor, Wilda Diaz in Perth Amboy, elected, as well as several legislators into the State House in Trenton.

Joshi said the Indian, Pakistani and Bangladeshi immigrant groups also are establishing themselves.

Especially since they are now into the second and third generations, who have grown up in the U.S.

“I know growing up in India, you sort of have a healthy distrust of the political process as well, so I don’t know if that is playing in the background as well,” Hamilton said. “We need to educate women on how to get involved.”

Especially in New Jersey, a known hub for South Asians.

The state lacks representation at the federal level alongside other South Asian hotspot states, like California.

That may be changing, especially for the South Asian women.

“Hopefully, with the sheer numbers, we will get a nice momentum of getting the South Asian women up the ladder,” Hamilton said.

With his veto pen, Murphy reminds state Legislature of his power