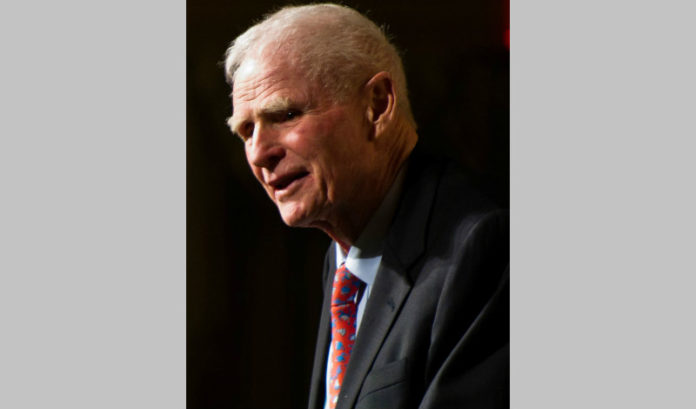 Until his final days, Brendan Byrne remained a regular at New Jersey political and business events.

At one event, when he was asked on the spot to say a few words, the former governor — who was elected to the first of his two terms in November 1973 and served during a time when gambling came to Atlantic City and the New York Giants came to the Meadowlands — could only poke fun at those in the room who seemingly made a career of going to networking events where rubber chicken and plenty of alcohol were on the menu.

He told the story of how one attendee, after arriving home late and being unable to open the front door, fell to the ground when his spouse answered the knock.

Byrne said the man looked up at his wife and said: “I do not have an opening statement, but I will be happy to take questions from the floor.”

The room exploded in laughter.

Byrne, 93, died Thursday night. Tributes poured in from all over the state as many recalled his distinguished career.

Known for being tough (some said lacking in charisma) while in office, Byrne was the opposite out of it, as he transitioned in his role of elder statesman.

He always had a funny line, even in serious situations. Those included one in February 2010, when he and Ruthi were randomly attacked in London by a mentally unstable man who managed to throw a punch at the then-85-year-old.

“Some nut came out of the blue and punched me in the jaw, and was immediately arrested,” Byrne told The Star-Ledger.

“I think I’m alright. I have some cuts on my face. I never fell down, like when I fought Muhammad Ali.”

Yes, the former governor did fight Muhammad Ali, in a staged event in 1979 to raise money for the Jersey City Medical Center.

Byrne stayed involved in New Jersey business and politics in many ways after leaving office.

For instance, Byrne penned a regular weekly column with Tom Kean, another former governor, in The Star-Ledger, with the two offering insights about the current state of politics.

Ted Zangari, member at Sills Cummis & Gross P.C. and a regular on the events circuit, remembered Byrne this way:

“Brendan Byrne was the master of the one-liner that could bring almost any topic into focus with a bit of humor. A few years ago, when he was on a panel discussing the budget and the topic of new revenue sources came up, Gov. Byrne said wryly, ‘The problem with sin taxes is that we’re running out of sins to tax.’ His comedic timing was perfect. His intellect, even in late age, was razor-sharp.”

The former governor also remained a regular on the annual “Walk to Washington” networking train trip sponsored by the New Jersey Chamber of Commerce. (The chamber said Byrne made 51 of the 80 trips, an incredible number.)

“Gov. Byrne was a lifelong supporter of the business community and the New Jersey Chamber, and we will all fondly remember his annual attendance at our Walk to Washington.

“He was an exemplary public servant who put the welfare of New Jersey ahead of partisan politics. It was his character and integrity that made him so many friends on both sides of the political aisle.

“I was blessed to have had numerous opportunities to talk to and work with Gov. Byrne, and I will miss his insight and his wonderful sense of humor.

“The passing of Gov. Byrne is a great loss for New Jersey and for me personally, but we were all much richer for having known him.”

Byrne was born on April 1, 1924, and raised in West Orange, graduating from West Orange High in 1942, where he served as class president.

He briefly enrolled at Seton Hall University, but left during his freshman year to serve in the U.S. Army during World War II. He received the Distinguished Flying Cross and four Air Medals before being discharged in 1945 with the rank of lieutenant.

Upon his return, he attended and graduated from Princeton University before going on to receive a law degree from Harvard University.

He quickly entered public service, being appointed an assistant counsel to Gov. Robert Meyner in 1955. He later served as the deputy attorney general, responsible for Essex County, before eventually becoming the Essex County prosecutor. In 1970, he was appointed to the New Jersey Superior Court by Gov. William Cahill.

Byrne ran for governor in 1973 — the only office he ever ran for — and won, defeating Charles Sandman in a landslide. Byrne more than doubled the votes for his opponent, winning 66 percent of the ballots.

Byrne served two terms and remains the last Democratic governor to win a second term, overcoming a seemingly unsurmountable deficit to triumph in his 1977 re-election bid. He joked after winning that he couldn’t be known as “one-term Byrne,” as his opponents suggested.

His years in office were filled with ups and downs. He served during the rise of the Meadowlands sports complex (the arena there was named for him for a time) and led efforts to expand preservations of the Pine Barrens. He also was in office during the establishment of a state income tax, which was supposed to be temporary.

Byrne, however, may have been best known for a conversation caught on tape when reputed mobsters claimed he was too ethical to be bribed, earning Byrne the nickname, “The Man Who Couldn’t Be Bought.”

Byrne was elected to the New Jersey Hall of Fame in 2011.

Statements of affection and admiration have poured in for Byrne.

“Gov. Byrne had an extraordinary career of public service. He served as counsel to Gov. Meyner, deputy attorney general, Essex County prosecutor, Superior Court judge and two-term governor of New Jersey. He did each of those jobs with integrity, honesty, intelligence, wit and flair. He cared deeply for the state’s environment, led the charge for the development of the Meadowlands Complex and for the establishment of casino gaming in Atlantic City. …

“On a personal note, Mary Pat and I express our deepest condolences to his wife Ruthi and his entire family. I considered Gov. Byrne a mentor and a friend. My life is richer for having known him, as I am sure are the lives of every person who had the privilege to meet him.”

“I am deeply, deeply saddened to hear of the passing of one of our great governors, Brendan T. Byrne. Gov. Byrne was a man who always — always — put doing the right thing ahead of politics, no matter how difficult the issue. His intelligence, honor, wit and courage combined with his dedication to his country and public service made him a model for all of us in elected office to emulate.

“But, besides his political skills and successes as governor and in the many other roles that he served with integrity, Gov. Byrne was above all a good and decent man, with a wonderful sense of humor. If you measure a man by his character, then Gov. Byrne was immeasurable.”

“I’ve had the honor of knowing Gov. Byrne for many years, and I’m deeply saddened by his passing. He will be remembered for his intelligence and humor, as well as his dedication to New Jersey that continued long after his two terms as governor. Few people have worked harder to make the Garden State a better place for all of its residents than Brendan Byrne.”

Statements and tweets continued throughout Thursday into Friday, from some of New Jersey’s top political figures.

The State has received the sad news regarding the death of Governor Byrne. His class, style and sense of humor should be an example for anyone who serves in elected office. My thoughts are with the Byrne family

Greatly saddened to learn of the death of Gov Brendan Byrne. He will be remembered as a man of unimpeachable integrity who did big things for our state. My prayers are with Ruthi and the family.

Byrne is survived by his wife, six children and nine grandchildren. One son, Brendan “Tom” Byrne Jr., is an asset manager and former state Democratic chairman who has considered multiple runs for office, including exploring campaigns for U.S. Senate in 2000 and 2008 and governor in 2017.

Byrne was predeceased by one daughter and his first wife, Jean Featherly Byrne.

Lozano to leave Choose at end of year — to take...