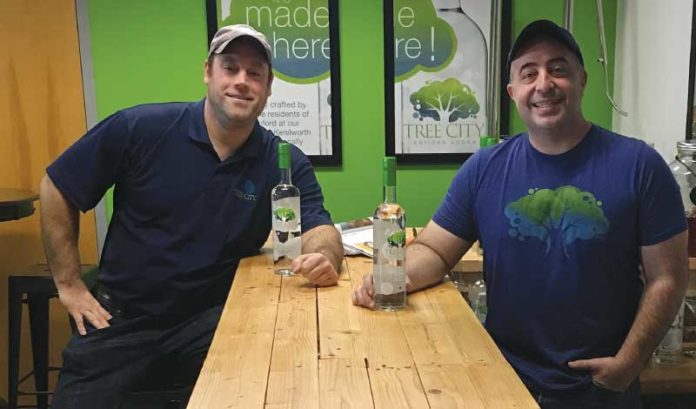 It is quite the statement for a local vodka distillery to make right off the bat.

But Richard Bentrewicz and Michael Maggio, founders of Tree City Spirits, believe this strongly in the pureness of their product.

“We want to become the Grey Goose of New Jersey and beyond,” Bentrewicz said.

Using self-designed and self-constructed equipment at the Heathermeade Distillery in Kenilworth, the bootstrapping duo said they have created an 80-proof artisan vodka — made entirely with ingredients from New Jersey — that rivals if not matches the quality of those produced by international distillers such as Ketel One and Belvedere.

“We’ve made a truly wonderful product that we can be proud of,” Bentrewicz said. “So, we’re not aiming to simply be considered ‘craft.’ ”

They may be on to something.

Tree City vodka was the only New Jersey spirit this year to be awarded gold by the American Distilling Institute.

Now, after acquiring distribution with the Peerless Beverage Co. in Union last month, Bentrewicz and Maggio are ready to live up to their hype — and, at least for Bentrewicz, commit to the company full-time.

“I left my career in sales and operations for internet technology companies eight months ago,” he said.

Bentrewicz had worked as the Northeast director of operations for Datalink, and in enterprise sales for Spectra Logic in New Jersey and New York.

Maggio, who still works as an engineering consultant, had held positions as partner of the global corporate consultancy at Antea Group in Raritan, vice president of global engineering and packaging at Johnson & Johnson in New Brunswick and executive director of package development at Estee Lauder Cos. in New York City.

The two have been neighbors in Cranford — a town designated a ‘Tree City USA Community’ by the Arbor Day Foundation for the superior care of its trees — for more than 12 years.

“We had bought a small still to mess around with once, and, while we at first made rather undrinkable vodka, we kept at it,” Maggio said. “I can’t tell you how much time and effort we spent reading, learning and making changes to our processes.

“At some point, a commercial distiller told us that if we were able to produce this kind of vodka on a simple still, we’d be in good business if we ever chose to go bigger.”

With the balanced backgrounds to create a strong partnership, Maggio and Bentrewicz decided to create their own distillery in 2014.

“Once we had the idea and the confidence to write up a business plan and conduct a Kickstarter campaign, we decided to invest in ourselves,” Maggio said.

It was one thing to make vodka; it was another, Maggio said, to create a startup company in an industry they were still learning about.

“We quickly learned that the minute ‘craft distilling’ becomes part of a product description, it costs 50 percent more,” he said. “We fell into that trap a couple of times, because we were just so excited to purchase equipment that we didn’t even end up needing.”

Maggio instead began utilizing his engineering background to design and build equipment himself.

“Now, when we want to implement new technology, the first thing we ask each other is, could we build this in a simpler or smaller way?” Maggio said.

For example, Bentrewicz said, the pair had purchased a filler that took too long to fill just one bottle. Maggio instead designed and built a filler for $18 that could fill up to four bottles at a time.

For Bentrewicz, there also was a bit of a learning curve when it came to sales, he said.

“It was like shooting darts to make it on shelves for the first time,” he said. “So, we started local. We hit every bar, restaurant and liquor store in Cranford. Then, once we established ourselves as the local vodka, we hit Hoboken and Jersey City, Montclair and Morristown, New Brunswick and Princeton, and so on.

“Our biggest customer over the past two years has been The Harvest Group restaurants. And, surprisingly, one customer that picked us up right away was Inserra Supermarkets. Their guy came in here, tried our vodka, and said, ‘Let’s get this in our stores.’”

Bentrewicz and Maggio were able to self-distribute Tree City vodka to more than 250 locations in New Jersey, selling 7,500 bottles in its first full year on shelves.

At $24.99 per 750ml bottle, it has found success in the midrange market by simply being “one of the best,” Maggio and Bentrewicz said.

“We work with cracked field corn from Etsch Farms in Monroe Township to make sure that the taste of our product is exactly what we want,” Bentrewicz said. “People try our vodka and say, ‘Holy cow — it doesn’t have that harsh burn.’ Well, we work hard to ensure that.”

“We take the finest cut we can to run about 5 percent cleaner and with more pure ethanol than the average vodka,” Maggio added. “It is then distilled nearly 40 times. That is why our vodka is so full-bodied and costs a bit more. We take the extra time to make it that way.”

“We buy the corn, we use the corn and then we barrel the corn — now without all the starch but still with all of the vitamins and minerals — and bring it back to the farm,” Maggio said. “They then have the ability to feed livestock or create fertilizer.”

Maggio and Bentrewicz currently operate at a volume in which they can do all the work, having grown the company 100 percent year-over-year since 2015.

Their deal with Peerless Beverage Co., finalized in December, will most likely change that.

“After having served our vodka at an outdoor event at Restaurant Serenade in Chatham, a gentleman gave our card to the president of Peerless,” Bentrewicz said. “He then came to our tasting at Lavallette Liquors to set up a meeting.

“We’ve now given Peerless Beverage Co. the goal of tripling our business, and they believe they can do it.”

If their distributor can achieve those numbers — about 20,000 bottles per year — Bentrewicz said he and Maggio will then continue looking for a distributor for the rest of the state and in border states such as Pennsylvania and New York.

“We want to eventually be known nationwide,” Bentrewicz said. “But we’re not trying to rush it.”

New Jersey can be tough when it comes to alcohol, Richard Bentrewicz, co-founder of Tree City Spirits in Kenilworth, said.

And it doesn’t just come down to antiquated laws or the more than a dozen other spirits distillers in the state.

“Distributors are often our biggest competitors, because their job is to make sure their clients’ product is on the menu and yours is not,” Bentrewicz said.

The three-tier model is difficult for most craft distillers to work within, Michael Maggio, co-founder, said.

“We, as a single craft distiller, have a hard time competing with the distributors who have 100 products in which they can cross-market, promote and create package deals from,” he said.

Richard Bentrewicz and Michael Maggio, founders of Tree City Spirits and longtime residents of Cranford, said they originally tried to create the Heathermeade Distillery in town.

“But it had to be a free-standing building or a building with cinderblock separation, and we could not find a reasonable place in Cranford that fit those characteristics,” Bentrewicz said.

Kenilworth, however, was only eight minutes away and an extremely small-business-friendly town.

“It was easy to open here,” Maggio said. “They didn’t have any other distilleries, but they just figured it out right along with us.”

“It was the right spot in the beginning, for sure,” he said. “And it still is the perfect building — it’s just in the wrong place.”

Not that Bentrewicz wouldn’t want to stay in Kenilworth — but if the laws had changed before Tree City Spirits had opened, the founders said they would have selected a location downtown rather than in the warehouse district.

“It used to be that we could have a tasting room in which visitors who took a tour could then taste three half-ounce samples,” Maggio said. “Now, we can serve our vodka in a much less restrictive, bar-like atmosphere.

“But we don’t get foot traffic like we might have in the heart of Cranford, for example. What we might’ve paid in rent we could have made up in the tasting room. Changing the laws now doesn’t help guys like us who already are in it.”