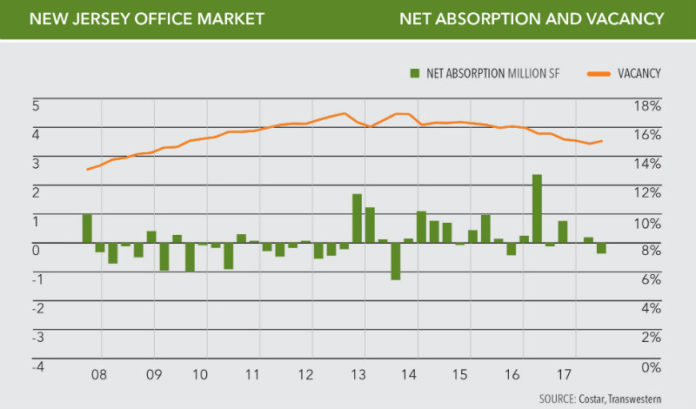 A down fourth quarter couldn’t stop the New Jersey office market from recording a fifth straight year of positive net absorption, according to a new report from Transwestern.

The New Jersey arm of the Houston-based real estate services firm said in a news release Monday that the firm’s Fourth-Quarter 2017 Office Market Report found a year-over-year figure of a half-million square feet of net absorption, including a diverse set of industries leasing space in statewide submarkets.

The fourth quarter did see the slowest period for New Jersey office leasing since the first quarter of 2016, the Parsippany-based office indicated, and the second consecutive year in which the fourth quarter saw negative net absorption.

The result was the first year in the five-year string in which the market did not reach the 1 million-square-foot net absorption mark.

“For the past five years, New Jersey’s office market has continued to grow at a steady pace, and with employment at an all-time high in the state’s private sector, we anticipate that trend will continue in 2018,” Matt McDonough, Transwestern managing director, said in a prepared statement. “While it may not be among the most rapidly expanding office markets in the country, the slow nature of the growth makes it among the most sustainable.”

Office vacancies had improved to an eight-year low of 14.8 percent in the third quarter, Transwestern said, but the fourth-quarter slump pushed that figure back up to the second-quarter level of 15 percent.

Most fourth-quarter lease signings were renewals, Transwestern added, and no transactions exceeded the 100,000-square-foot range, with two-thirds coming in at less than 20,000 square feet.

Outlook is positive, however, thanks to several blue-chip companies announcing plans to invest in New Jersey in the near future.

“The years of growth experienced by New Jersey’s office market have been powered by the state’s diversity, in terms of both industry and choice of office locale,” Matthew Dolly, Transwestern’s New Jersey research director, said in a statement. “While the market was carried by smaller deals in 2017, large tenants are rapidly applying for tax credits as a transitioning state government puts the retention of Grow New Jersey (incentives) in flux.”