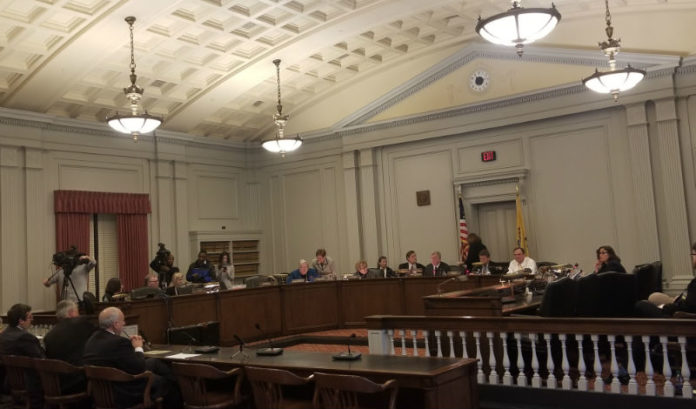 The Legislature did its part to aid Gov.-elect Phil Murphy with his focus on issues with New Jersey Transit during a more than two hour joint Senate and Assembly hearing Monday.

NJ Transit officials discussed a host of issues at the organization, including staffing and retention, lost revenues and slow implementation of changes.

Staffing issues were a top concern.

In a departure from comments from a spokeswoman to the New York Times in May last year, officials Monday told the joint committee that the agency has been working hard to regain staff it has lost due to retirements or from departures to peer agencies.

Lavell told the committees that the agency has seen a significant decrease in interest for open positions in recent years, especially as the millennial generation becomes a larger portion of workforce.

Lavell said NJ Transit’s training program, a two-year program that starts with 16 to 22 trainees, may end with as few as four or five graduates.

And those already with NJ Transit are not necessarily looking to pick up more work, Burkett said.

“Now we have a workforce that doesn’t want to come to work,” Burkert said. “Some are satisfied with, ‘I’ll just work my 40 hours, I don’t want the overtime.’ New Jersey Transit, as it stands now, you have to have people work weekends. They can’t run regular service on just who is here now. You need somebody to work their weekend relief day just to have normal service.”

And then there are those who worry about the dangers of interacting with aggressive passengers.

“I’ve had 4-5 people quit just over assaults,” Burkett said. “They are afraid of being assaulted. I’ve had other people move to management.”

Which leads to another big problem.

Once employees make it to the non-union management positions, their experience makes them the perfect candidate for peer transportation agencies such as Metro North or Amtrak to poach them, since they can offer competitive salaries and benefits, according to Lavell and Santoro.

In a letter to the Federal Railroad Administration in June 2016, Lavell referenced a problem with staffing and the problem with nonunion competitive salaries. At that time, the agency had about 52 vacancies, he said.

Santoro, who is stepping down in April, has since approved a 1.9 percent increase in compensation for both union and nonunion employees, between last year and the current fiscal year, all in the hopes of attracting and retaining more employees.

Preliminary reports blamed the Hoboken crash on a train operator who may have had sleep apnea.

The final report from the National Transportation Safety Board has yet to be filed.

Santoro, who became executive director just after the crash, told the committee that, as a person who suffers from sleep apnea himself, he understood the dangers.

When he took the helm of NJ Transit in 2016, Santoro said he began screening locomotive engineers for obstructive sleep apnea.

In his written testimony, Santoro said that, of the 373 engineers screened, 57 were initially removed pending a sleep study. Of those, 44 required treatment and physician approval before being allowed back to work.

NJ Transit officials said they are giving increased attention to lost revenues from tickets that are never collected.

In addition to those abusing the system, using reduced-priced tickets for seniors or disabled riders,  Burkert said there are others who simply avoid conductors by shifting between cars, or boarding cars that don’t have conductors nearby — observing that the conductors will be unable to reach them in time to check for tickets before they depart.

The evasions occur both for tickets bought through Ticket Vending Machines or through the NJ Transit app.

Ticket evasions are part of the understaffing problem plaguing the agency, according to Lavell and Burkert.

Gordon suggested there should be an easy technology fix to the abuse of tickets.

“It seems like we’re light years behind where we should be, technologically,” Gordon said.

The Positive Train Control system — the federally-mandated system that helps brake or stop trains to prevent train-to-train collisions, derailments from speeding, work-zone accidents or running signals, is coming, according to Santoro.

The federal mandate has been extended until the end of 2018, and both NJ Transit officials said they believe New Jersey can meet he extended deadline.

There is a 6-mile section that is demo-ready on the Morris and Essex Line that will be activated “in coming weeks,” Santoro said in his testimony.

“Although NJ Transit has made considerable progress over the last few months, we are not satisfied with the current progress of the contractor’s work,” Santoro said. “In recent weeks, the contractor, Parsons Transportation Group, and more specifically, Parsons’ subcontractor, Alstom USA, has experienced reliability issues with respect to on-board equipment while retrofitting vehicles, which is affecting its ability to timely deliver vehicles with PTC functionality.”

In addition to new retrofitting, there are also a number of parts and repairs to existing equipment that have reduced the efficiency of NJ Transit’s services, the officials told legislators.

Increasing lead time for parts, as well as the loss of staff that focuses on procurement of parts and equipment, has lead to the locomotives that remain out of commission.

“It is taking us longer to get parts for our equipment,” Lavell said. “Procurement has lost a lot of talented individuals.”

McKeon said the committee, meeting on the last day of the legislative session, anticipates creating a report from the testimony Monday to provide the incoming administration, along with, potentially, recommendations moving forward.

“Our goal is to have that in the next 30 days to assist the new administration in turning this transit agency into the best agency in the nation,” he said.

Children’s Place to begin reopening stores — but not in Jersey...

Clean and Sustainable Energy Summit at Montclair State on Thursday