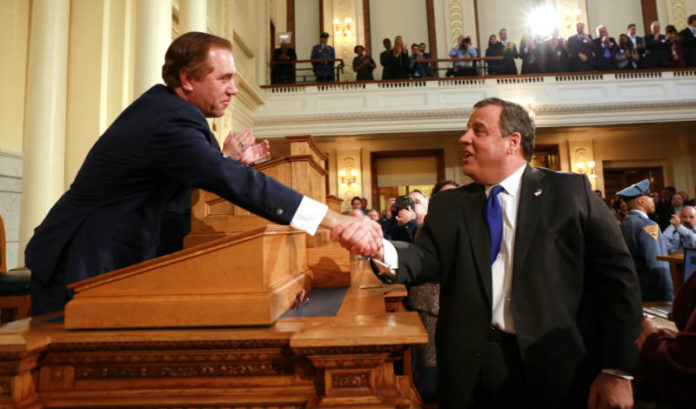 Some remarks were aimed at Gov.-elect Phil Murphy, on topics such as school funding and unions, while others were focused on his role in achieving certain milestones for the state.

“We need to remember where we were nine years ago,” he said. “On the brink of financial ruin as a state. More people unemployed than at any time in modern history. A culture in Trenton of avoiding the tough decisions. Of taxing more. Of spending more. Of borrowing at a breakneck pace. The highest property taxes in America growing at a record rate. We needed tough and plain-spoken leadership to deal with these problems. We needed to care less about being loved and more about being respected. That’s why we ran for governor.”

Here are what he said are his key achievements:

In response to Christie’s address, Democratic leadership said that, although he took credit for some of the ideas of the Legislature, he ended on a good night.

“For a minute there, I almost thought I was going to miss him,” Senate Majority Leader Loretta Weinberg (D-Teaneck) told reporters after the speech.

“He laid out the good things that were done with the bipartisan efforts in both houses of the Legislature, and he kind of ended it with a lot of grace, and elegance, and wishes for the new administration. I think that was a high point.”

Both Senate President Stephen Sweeney (D-West Deptford) and new Assembly Speaker Craig Coughlin (D-Woodbridge) said Christie took credit for some of their and their party’s ideas, but the collaborative effort in passing certain measures was what mattered.

The members also turned toward the incoming governor.

“We need to give Phil a chance” to enter the field, Sweeney said.

Sweeney also said that some of the changes going on in Washington, D.C., such as the tax reform, have inadvertently given the state an opportunity to look more closely at its own practices.

Ideas such as county-level public school boards, a different way to approach Murphy’s millionaire’s tax, and other such ideas now have an opportunity to be heard, Sweeney said.

Assembly Budget Committee Chair Eliana Pintor Marin (D-Newark) echoed Christie on the success of economic incentives, but added that, while she is looking forward to working with Murphy, hard financial times — in part due to the moves in D.C. — were ahead of the state.

Coughlin reiterated a point made earlier in the day, that the Assembly would have to have a mind of its own on certain issues, and be more thorough about legislation before taking action.

But, he added, “being thorough and thoughtful doesn’t mean being slow.”

Each bill would require its own time frame, he said.

Murphy announces $2.8M in apprenticeship grants — with goal of hiring...