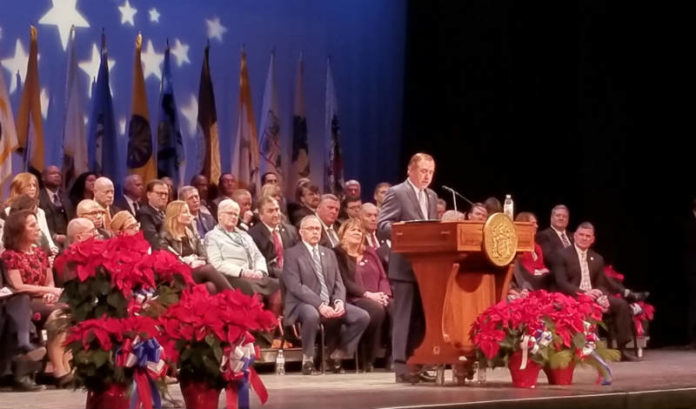 Craig Coughlin began his leadership as the new Assembly speaker on a light note.

“Most of you know that I have been a member of this esteemed body since 2010, representing the great people of the 19th Legislative District. But beyond that, I suspect you don’t know very much about me,” he said. “Unless you’ve read the political blogs, in which case, you know that I am low-key, relatively unknown and a back-bencher.

Coughlin (D-Woodbridge) was sworn in as the new speaker, replacing Assemblyman Vincent Prieto (D-Secaucus), for the new legislative session starting this year.

During his speech to the crowd, following the swearing in of all members, Coughlin went on to define his vision and outline key issues he would focus on.

Among them was fighting for the middle class and “taking back” New Jersey.

He also set a strong tone for the Assembly as it relates to the state Senate and governor.

“It was Al Perroni, the former head of (the Office of Legislative Services), who, at the end of my orientation when I was first elected, brought home to me the enormity of the responsibility we have,” Coughlin said. “He said there are about 9 million people in the state of New Jersey and 121 of them get to make the rules. And you are one of them.”

On that note, Coughlin established a willingness to collaborate, and equally stand firmly against the Senate and governor, if need be.

“All voices in our chamber matter — whether Republican or Democrat; north, south or central, I will listen (to) and respect each. However, I do reserve the right to disagree,” he said. “I will always look for collaboration with the Senate and with our governor, but, inevitably, there will be times when the Assembly must set its own course and act as an independent and equal branch of government. I will not be afraid to chart that path when it is necessary.”

He touched on key issues such as New Jersey Transit; property taxes; fully funding schools; hunger and poverty; job training; and a greater focus on science, technology, engineering and math, or STEM, education and industries.

During his remarks, Assembly Majority Leader Lou Greenwald touched on a number of issues, including equal pay for women.

Citing his college-age twins — a boy and a girl — Greenwald told the audience their abilities should determine their future salaries.

“Over the last decade, we have seen mountains of data showing a disturbing truth. It is a travesty that, in 2018, women will still receive less compensation than men for equal work,” he said. “Here in New Jersey, a white woman makes 80 cents for every dollar that her male counterpart earns, African-American women make 58 cents to the dollar, Latina women make just 43 cents to every dollar. Yet we have led the way in efforts to try to close this wage gap. We passed historic pay equity legislation that was signed into law. Some of our efforts — like bringing transparency to whether public contractors provide equal pay for equal work — have been vetoed.

But, as I stand here today as a father, I refuse to believe that my daughter’s value is 80 percent of that of her brother’s. I love them both equally, and I want them to be treated equally.”

State Senate President Stephen Sweeney (D-West Deptford) also was sworn in for another leadership term Tuesday, among others.

Sweeney pushing to reopen more of economy — and for more...