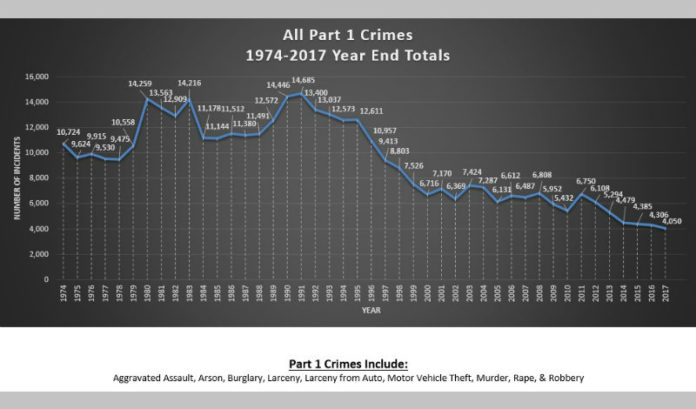 Of the many things Gov. Chris Christie has accomplished in his eight years, one of the key achievements — reducing crime and increasing economic growth in Camden — has received significant recognition.

This year, the Camden County Police Department is boasting a 30-year low in homicides, and seeing a significant decline in the poverty rate.

It’s something businesses in the area, ranging from the new investments at the waterfront, to anchors like Campbell Soup Co., are keeping an eye on.

The region has seen a continuous decline in total violent crimes since 2012, with the exception of rape, which remains about the same since 2012.

“The men and women of the county police department, working side by side with residents and our law enforcement partners, delivered one of the safest years in the modern era for Camden City,” said Freeholder Director Louis Cappelli Jr. “Everything from homicides and violent crime to total crime are down, and there’s been a tremendous amount of progress that has not been seen in the city since the 1960s. There are many stark changes that have been made in Camden over the past five years, including $2 billion of private investment, an expansion of higher education and a high school graduation rate that has incrementally increased. In short, homicides are down to a 30-year low, the poverty rate has drastically decreased and more kids are getting a quality education in Camden City, making Camden County a stronger, safer place.”

The U.S. Census Bureau shows that the poverty rate dropped 10 percentage points, to 30.5 percent in 2017.

“Another problem we confronted eight years ago was one that had been baffling to administrations since the 1970s. What to do to turn around the city of Camden,” Christie said. “Some had tried to turn it into a militarized zone to stem the tide of murders and shootings. Some tried to throw money at the problems in Camden due to the urging of corrupt politicians who later landed in jail due to the efforts of my U.S. Attorney’s office. That, of course, did not work. We decided to confront these problems using common sense, bipartisanship and, once again, telling the hard truths that past administrations were too politically correct to say out loud.”

He also highlighted designating Camden as a Garden State Growth Zone, which has spurred some of the new developments.

(READ MORE from ROI-NJ on Christie’s State of the State.)

“These projects will have $1.4 billion in private investment, create nearly 2,000 new jobs and retain over 3,500 more jobs. The development will spur 7,000 construction jobs for our building trades. It is a who’s who of American business: Holtec, Cooper/MD Anderson Cancer Center, Philadelphia 76ers, Subaru of America, American Water, EMR Eastern, Lockheed Martin, Cooper University Health and the new $700 million Camden waterfront project with office space, residential units and a hotel,” he said.

“The rebirth of Camden is happening — not with government giveaways or tanks in the street — but with a bipartisan spirit and a can-do attitude.”

A spokesperson for Rowan University said that the news is good and that the safer environment leads to a growth in activity — essential for an institute like Rowan that has a presence in the downtown.

“In the downtown area, where we are, there are already a lot of buildings and construction, and that leads to more density. Density helps with crime rates as well, because there are more eyes on the street. We are one of those organizations that is helping build density that will further help reduce crime in the city,” the spokesperson said.

A Campbell’s spokesperson told ROI-NJ that the news is good for the company, which has made investments in Camden, including $132 million to remain in the city, and has a great relationship with the local government and police.

“Campbell Soup has called the city of Camden home for 149 years. In the past several years, we’ve seen Camden progress in several areas, including economic development and lower crime rates. We’re proud of our contributions to the city and believe Camden has momentum. Our outlook for the city is very optimistic. Campbell intends to be here for the long term, and we’re committed to continuing to help revitalize Camden,” a spokesperson said in an emailed statement.

And a Cooper spokesman, Thomas Rubino, said the health system was pleased with the police results.

“As the largest employer in Camden, we commend the Camden County Police Department for their successful community policing efforts that have reduced crime, increased safety for residents and is helping create an environment for further economic revitalization,” he said in a statement.