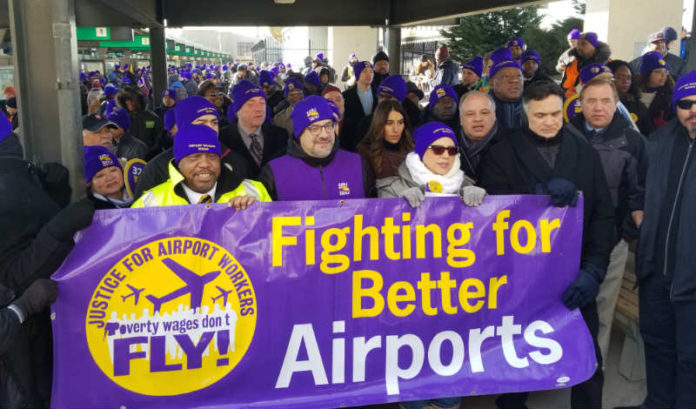 More than 500 workers marched through terminals B and C, temporarily blocking traffic in the drop-off lanes and the United Airlines Premier Access check-in area.

New York has already made a $15 minimum wage law, but New Jersey’s attempt was thwarted when Gov. Chris Christie vetoed a bill that would do the same.

Asked whether or not there is concern over the response companies and airlines will have if a higher wage is mandated — in the form of higher price tags on airline tickets — the politicians and union leaders replied no.

Meghan Cohorst, spokesperson for Unite Here, which represents caterers for airlines, including United Airlines, said the union has not heard either way.

Ruiz said she is confident the airlines will not penalize customers, and has sponsored a bill that would make higher wages into law.

But, she said, she hopes the Port Authority of New York and New Jersey will adopt the higher wages as a policy in its February meeting.

“We are hoping the Port Authority will do the right thing first,” she said. “The airline industry makes sufficient enough money to be sure that the employees and the workers who ensure we are safe and the airport is safe and remains strong are taken care of properly.”

Brown said the Port Authority can set a new minimum bid for vendor contracts based on inclusion of the higher wages.

“They can set a new floor, we hope, and the contractors can bid on that floor, and still have competitive bidding, but based on family-sustaining wages and benefits,” he said.

“It depends on what the contractors do. They could take less profit, for example, ” Coughlin said.

Booker said the idea that higher wages are problematic is a “tired” argument and has proven otherwise in other cities around the country.

“We’ve seen airport after airport in this country increase wages and … not jack up prices, ” he said. “This argument is such a tired trope, that somehow creating a $15 per hour wage would jack up prices.”

In Seattle, for example, where the $15 minimum wage became law, more people are out to dine and restaurants are thriving in that city, Booker said

“There are lots of people (in Newark) still struggling, still living off of food stamps and depending on subsidized housing. When they work 40, 50, 60 hours a week, they deserve to live with some financial security.”

Coughlin said the topic is one of the priorities after Murphy takes office.

Izzo: On how climate crisis has changed – and why turning...