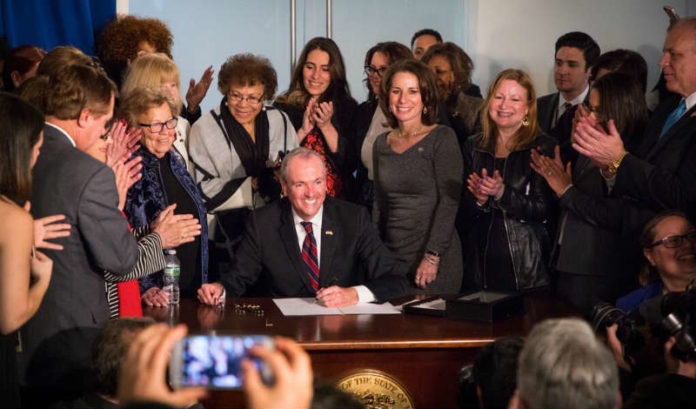 Flanked by legislators and his wife, Gov. Phil Murphy signed his first executive order just three hours after his inauguration Tuesday, mandating a change in hiring practices for all state employees.

“New Jersey’s state government must set a positive example for other employers to acknowledge and close the gender wage gap by prohibiting inquiry into the salary histories of prospective employees,” reads the executive order.

While the order seeks equal pay, it does not specifically say so in the document.

The order requires no salary history be required from an applicant, but does not mandate that all equivalent positions be paid equally.

Citing other states and major cities across the U.S. that have adopted similar policies, and noting statistics that show women of various minorities earn even less than the 80 cents to the dollar that women earn, Murphy said the order will prevent perpetuation of the wage gap by getting rid of the practice of asking about prior salaries.

It also represents $32 billion in lost wages each year.

“This is 2018; there is absolutely no reason for a woman in New Jersey working full time should be making 82 cents to the dollar of a male counterpart for the same work,” Murphy said. “It’s a drag on our economy and it’s time for it to end. We know how these disparities start. With employers hiring a person, usually a woman of color, for a wage below what they know the job is worth. But the injustice doesn’t stop there. As that individual moves through their career, from job to job, that single act of starting out at that artificially low wage haunts their future economic prospects unendingly.”

The hope of many in the state government is that this sets the tone for legislation to pass that will apply to all industries in the private sectors.

Legislators lined up to throw their support behind the move.

Senate President Stephen Sweeney (D-West Deptford) said that the issue doesn’t exist in his industry, but he has supported the move in the Legislature.

Sens. Nia Gill (D-Montclair) and Loretta Weinberg (D-Teaneck) said the order was crafted after their bill, which passed the Legislature and was killed in 2016 by Gov. Chris Christie.

“We have been in the vineyards, working for this for many years,” Gill said.

She said in the wage issue, for people of color and for women with or without degrees, is particularly important.

“The salary offered to a prospective employee should be based on what a job is worth, rather than the candidate’s prior compensation,” Kean said.

“Pay discrimination shouldn’t follow people from job to job, but that’s exactly what happens when employers discover a candidate was underpaid in a previous position,” said Corrado. “Employers are then more likely to offer a candidate less than they deserve, perpetuating wage discrimination into the new position. This executive order would prevent that, helping to ensure pay equity for state workers.”

Assemblywoman Valerie Vianieri Huttle (D-Englewood) said it was a great first move by the new governor.

“The gender pay divide is something we have been trying to bridge for years in New Jersey, with measured success.  Now that we have an active partner in the Governor’s Office, women can expect to not only be seen, but to be heard and supported,” she said. “For too long, women in our state, especially African-American and Latina women, have been held back by a system that perpetuates the wage gap. By eliminating one of the barriers that has historically kept women’s wages depressed, more women will hopefully begin experiencing pay equity for the first time in their lives. And when women’s pay goes up, the quality of life for children and families throughout this state will benefit as a result.”

Data shows that, if New Jersey women received equal pay for equal work, the poverty rate for working women in the state would drop by half and the economy would grow by $16.6 billion, according to the Institute for Women’s Policy Research, the two said in a joint statement.

“As evidenced in the 2017 EWNJ report on gender diversity in senior corporate leadership, ‘A Seat at the Table: Celebrating Women and Board Leadership’ … at companies where women comprise 15 percent or more of the senior management, there is a 52 percent higher return on equity and a 22 percent higher ratio of dividend payout than those with 10 percent or fewer women in management,” they said. “Once again, we salute Gov. Murphy and Lt. Gov. Oliver for this important and meaningful policy action.”

Show & Tell: Sherrill talks about the New Workers Act she...