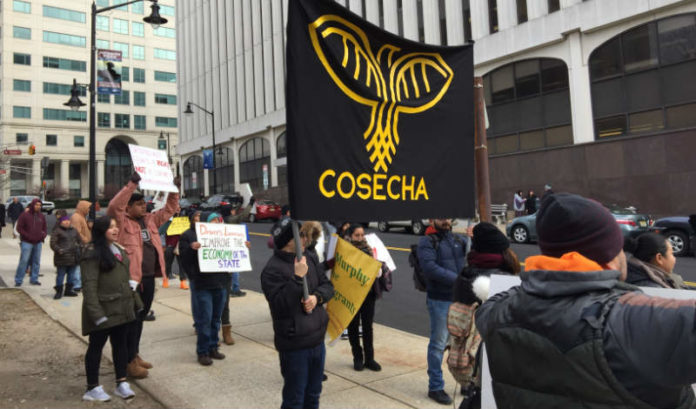 They came from across the state to show their support and admiration for the new governor.

They also came with their hands out.

The inauguration of Gov. Phil Murphy marks a turning point in his political career, as he goes from candidate to politician — which means he goes from someone making promises to someone with the ability to fulfill them.

It’s the reason a few groups were outside the War Memorial building making sure their voices were heard and their causes remained top of mind.

Alejandro Jaramallo, a spokesman for the immigration group, Cosecha, was among approximately 100 members marching and chanting their demands for driving licenses for undocumented workers.

“Having driving licenses for all undocumented immigrants is a good thing for the state of New Jersey,” he said. “It will help the economy and it will make the roads safer. It will make people (drive) more safely.”

The issue, he said, has languished in the Legislature for nearly two decades. His group wants action.

“We don’t want more excuses,” he said. “We want this bill to pass.”

Jaramallo tempered his optimism that it will — even with a governor that pledged to make New Jersey a sanctuary state on the campaign trail.

“Gov. Murphy has said that he is in favor, but, in the past, many elected officials have said they are in favor and they do not do anything,” he said. “We are here to make sure he sees us and knows that we will be here until he passes it.

“We are here to make sure a debt to the immigrant community gets paid.”

Representatives for Planned Parenthood have the same hopes — just a bit more confidence in their ability to get the action they want.

So said Casey Olesko, the communications director for the Planned Parenthood Action Fund of New Jersey.

“This is a very good thing for us,” she said. “Gov. Murphy spent his entire campaign talking about how he stands for Planned Parenthood, how he stands with women and he’s going to restore the funding for family planning services that Gov. (Chris) Christie cut. We are here in support of him.”

But, just to make sure they aren’t forgotten, a group of approximately 50-60 wore pink hats and marched around the building, shouting:

“When do want it?

As the dignitaries filed in for the ceremony, a plane sponsored by Pre-K Our Way circled the building with a banner that read: “Expand Pre-K Now: 50,000 N.J. Kids are waiting.”

Who gave Megan Coyne a new job? The White House