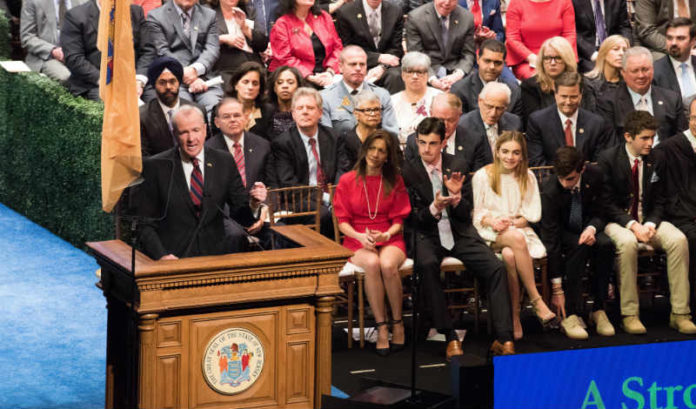 In the wake of Gov. Phil Murphy and Lt. Gov. Sheila Oliver being sworn in Tuesday, numerous officials offered up congratulations and other thoughts to New Jersey’s new top executives.

“As Gov. Murphy acknowledged, hard work lies ahead, and, as I’ve also made clear, the Assembly is ready to do hard things, stand up for middle-class families and boost our economy. This is a day to celebrate — but with Gov. Murphy and Lt. Gov. Oliver on board, the hard work also begins in full. I look forward to better days ahead for New Jersey.” — Assembly Speaker Craig Coughlin (D-Woodbridge)

“Today is the beginning of a new era in New Jersey, but it is not without its challenges.  While we’ve had a number of bipartisan successes over the past eight years, there are many families in our state that are still struggling to make ends meet, put their children through school and, most importantly, afford their property taxes. I know Gov. Murphy is committed to raising the quality of life in New Jersey and making our state a more affordable place for everyone to live and I look forward to working with him in the spirit of cooperation to meet these challenges.” — Assembly Majority Leader Lou Greenwald (D-Voorhees)

“Today, we usher in a new era, long awaited. I extend my warmest congratulations to our state’s new leadership, Gov. Phil Murphy and Lt. Gov. Sheila Oliver. We’re ready to get to work on the critical issues impacting the lives of New Jersey residents daily. Education funding, health care, pension reform and strengthening the economy are now, truly, on the horizon for New Jersey.” — Assemblywoman Shavonda Sumter (D-Paterson)

“There is a lot of work to be done, and it won’t be easy, but I am optimistic that, with Gov. Murphy and Lt. Governor Oliver at the helm, we will accomplish great things for the people of New Jersey.” — Assemblywoman Eliana Pintor-Marin (D-Newark)

“We congratulate Gov. Murphy and wish him, his administration and his family all the best on this historic day. NJBIA looks forward to having a seat at the table with the governor and his staff regarding policies and issues that impact our businesses and residents, including affordability, economic development and taxation, regional competitiveness and workforce development.” — Michele Siekerka, CEO and president, New Jersey Business & Industry Association

“New Jersey’s 56th governor started his tenure out today on the right note, forcefully making the case for a stronger and fairer Garden State. In particular, his calls to make the state’s tax code fairer, raise wages for low-paid New Jerseyans, protect our state’s striving immigrants, rein in overzealous tax breaks for corporations and allow all New Jersey workers to access earned sick time are all welcomed, and we look forward to working with his administration and the new Legislature to move these ideas from words in a speech to strong policies improving the lives of millions of New Jerseyans. These will be important first steps, and without a doubt they signal a new day for New Jersey. But even bolder action will be required if we want to truly tackle the state’s pressing problems, reduce income inequality, rebuild the state’s middle class and mend the gaping holes in the state’s safety net.” — Gordon MacInnes, president, New Jersey Policy Perspective

“We look forward to the state Legislature and Gov. Murphy taking swift action to restore (family planning) funding and protect and expand access to reproductive health care. After eight years of Gov. Christie’s repeated vetoes of this lifesaving funding, we know that this administration will stand with New Jersey women and take action.” — Christine Sadovy, legislative and political director, Planned Parenthood Action Fund of New Jersey