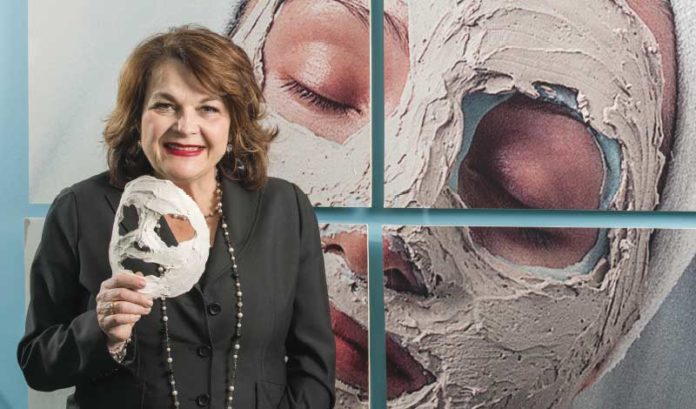 Born in Legnica, Poland, Sarfati immigrated to New York City in 1970 at the age of 17 after being forced out of her homeland.

Less than a decade later, she opened her first spa in Manhattan.

Today, Repêchage — a more than $20 million company — is one of the most widely used skin care brands by spas, resorts and medical professionals worldwide.

The secret to its success?

“People often do not realize that the U.S. government can and will work for you if you are willing to put in the work,” Sarfati said. “I am a perfect example of that.”

After launching in five countries in 2017, Repêchage is now available in 42 nations worldwide.

While she continues to set global standards for professional skin care treatments, Sarfati said she has no intention of slowing the pace back at home.

“This year, we will invest in solar energy for our building and continue to seek assistance from the New Jersey Department of Labor and Workforce Development and U.S. Food and Drug Administration and lean manufacturing training,” she said.

“We are constantly learning, training and aiming for bigger and better goals.”

It’s been that way ever since she was chased from her homeland.

Sarfati said she always had been interested in health, wellness and science.

She studied chemistry and biology in Poland — and couldn’t get enough of it.

“It wasn’t enough for me to simply say, ‘OK, this is water,’” she said. “I needed to ask, ‘How is water created? Where does it come from? What is its chemical composition? What is its pH?’

“I was interested in the changes one can achieve when working with the proper ingredients and chemistry.”

“Poland had more than 1,500 spas, which are different from those in America today,” she said. “European spas are more focused on wellness. For example, you can go to a spa to treat psoriasis.” Sarfati was apprenticing and learning medically-oriented skin care techniques at such a spa when her life suddenly changed.

She was forced to leave her home in 1969 as part of the mass emigration of more than 13,000 Poles of Jewish origin during a five-year anti-Semitic campaign waged by the then-minister of internal affairs.

“We became refugees when we left Poland one night in October 1969,” Sarfati said.

Her parents, who she said were survivors of the Holocaust, brought her to Rome and then to New York City.

“We settled for a short period of time in a single hotel room in Rome as we were vetted by the U.S. government to come to America,” she said.

Upon arriving in the U.S., Sarfati decided to enroll in beauty school to obtain her cosmetology license.

“I loved and wanted to continue pursuing a career in the field,” she said. “But, while there were certainly salons for makeup and hair, women here at that time did not really talk much about wellness and total skin care.”

Sarfati met and married her husband, David, in 1972 and had two children. She worked as a makeup formulator and esthetician while also taking on private customers independent from her employer. “I worked all the time to make sure I not only was improving my trade skills, but also my business,” she said. Her life would soon change again.

In 1977, Sarfati and a friend opened their first spa in Manhattan.

“The funds came from my family and friends who believed in me,” she said. “I borrowed the money and did not sleep for months until I was successful enough to start paying them back.”

Her success, she said, stemmed from an early interest in seaweed.

“Seaweed is one of the most incredible raw materials on Earth,” Sarfati said. “It has no roots and feeds itself through osmosis while delivering to us vitamins and nutrients, rich amino acids, elements and minerals — everything that our skin and body needs. That’s why ancient civilizations have been eating seaweed for centuries.”

Sarfati said her decision to incorporate seaweed into skin care products was solidified once she learned farming communities in Israel also were using it as a biostimulant.

“I saw how lush and beautiful the plants, fruits and vegetables were and thought, well, if that’s what seaweed can do in the desert, imagine what it can do for one’s skin,” she said. “That idea brought me to France in the late 1970s to work with companies and marine biologists to harvest and develop the raw material for cosmetic application.”

Sarfati created her signature “four-layer” facial in 1980 using seaweed, an idea on which she founded Repêchage in the same year with her husband, the chief operating officer.

The rich, pure seaweed filtrate found in many of Repêchage’s products is extracted at the company’s 50,000-square-foot facility and headquarters in Secaucus via proprietary methods from seaweeds found mostly off the coast of Maine (80 percent) and the Brittany Coast of France.

Repêchage works closely with professor Charles Yarish, the department of ecology and evolutionary biology and the department of marine sciences at the University of Connecticut to create sustainable seaweed harvests that benefit both the business and the ocean.

“It’s like giving the plant a haircut,” Sarfati said. “You simply cut it at a certain area so that the plant can continue to grow. Certain species of seaweed can live (many) years, so there is no need to kill the plant.”

She wanted to have great impact on her clients.

That is why many Repêchage products only require single-dose applications, which helps spa owners, resorts and medical professionals maintain more sanitary conditions as well as better control over their inventory and costs.

In fact, Sarfati said, her skin care methods are practiced by top estheticians and taught in more than 200 schools globally.

She also wants to have great impact on her employees.

Back home, Repêchage is one the most diverse manufacturing companies in New Jersey, with women at all skill levels making up 80 percent of its workforce.

The company is doing just fine without them. Sarfati employs nearly 90 between its offices in Secaucus and the United Kingdom, and it has achieved nearly 10 percent annual growth.

This year, Sarfati said, she would like to further distribution in China, Thailand, South America, central and western Europe and the Middle East.

“Since we already are quite successful in Korea, my priority will be further expansion into Asia,” she said.

While the beauty market today is currently dominated by facial treatment masks, Sarfati said she is not concerned.

“We are 20 years ahead of that trend,” she said. With more than half of the business already coming from the sales of its facial treatment masks, Sarfati said Repêchage is instead looking at what’s next.

“We always have had a good understanding of the market and what we would need to do to stay ahead of the curve,” she said.

Lydia Sarfati became an overnight refugee and U.S. immigrant at the age of 17 due to political and social unrest in her homeland of Poland.

The help she received from the U.S. government, Sarfati said, was key to her eventual success in business.

“I can manufacture here because the U.S. Small Business Administration and the U.S. Economic Development Administration not only gave me the chance to create something, but also helped me along in building my factory,” she said. “That hasn’t changed. In the last five years, all the activity by the U.S. Department of Commerce, for example, has helped us to launch Repêchage elsewhere in the world.

“We were able to launch in Moscow, Russia, in April of last year because of the work that the U.S. Department of Commerce did in 2016, vetting possible distributors, providing us with appointments with those distributors and helping us to sign all of the agreements.

“I am grateful for the opportunity this country has given me to build my life and business.”

Sarfati added that, while that privilege should be made available to anyone willing to put in the work in this country, it should not be taken lightly.

“As a refugee and immigrant, I am very much for proper vetting,” she said. “Our backgrounds should be checked.”