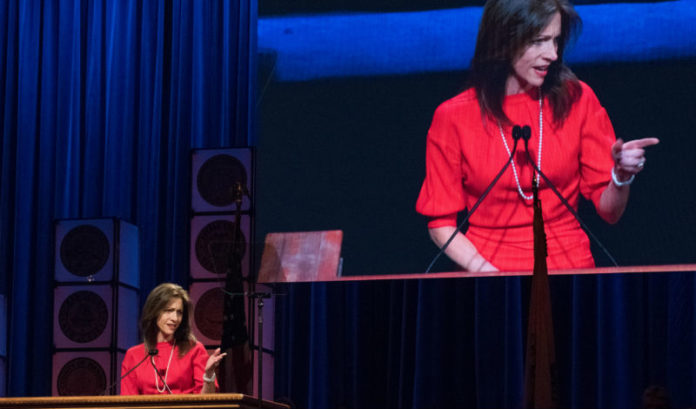 First lady Tammy Murphy has hired a policy director as part of her team in the new administration, ROI-NJ has learned.

Lauren Lalicon, director of government relations for the New Jersey Chamber of Commerce, is going to be working on the environmental policies that Murphy has indicated she is interested in.

The hire confirms observations that Murphy is going to be less behind-the-scenes than her predecessors.

This has been evident by her presence, right next to her husband, Gov. Phil Murphy, at both executive order signings and at the first official cabinet meeting Wednesday.

For those who have paid close attention during the campaign, when Tammy Murphy acted as a surrogate for her husband, it comes as no surprise.

“With regards to New Jersey’s first lady now, it was apparent to me and to other observers that the Murphy marriage really looks like a partnership,” said Brigid Harrison, professor of political science and law at Montclair State University.

“There are a lot of policies that need to be championed. Right now, at least, voters in the state would be willing to give the governor and Mrs. Murphy some latitude as they sort their roles out and figure out what their priorities are. Governors do have a great deal of latitude. A governor could easily assign this policy person to themselves and have them be unofficially someone serving the first lady. The fact they are calling the role what it is demonstrates a degree of transparency.”

Murphy looking to expand trade, relations with Germany and Israel