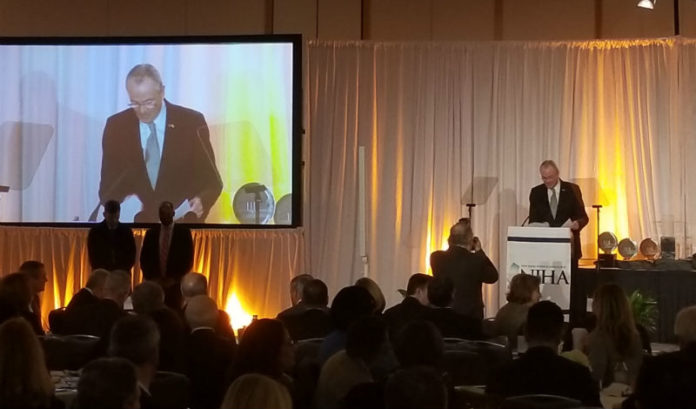 Gov. Phil Murphy made a cameo appearance at the New Jersey Hospital Association annual meeting Friday, applauding the sector for its impact on the state’s economy and touting the organization’s history.

“Health care is so important to our state and its future,” Murphy told the crowd of more than 400.

He touted his Department of Health commissioner nominee, Dr. Shereef Elnahal, whom he became aware of due to Elnahal’s reputation at the Department of Veterans Affairs while Murphy’s wife was on the board of the University of Virginia’s health care system.

Murphy said the administration is hoping to create a more collaborative statewide system.

“Innovation must mean more than medical procedures and diagnostic tools. We need that, but there needs to be more,” he said. “Certainly, licensing and regulation are the core responsibilities of the Department of Health. However, I don’t want the department — and I know Shereef joins me in this — to be bogged down by bureaucratic minutiae. I want the department to be a driver in creating a statewide health system of culturally competent and high-quality health care.”

That fits well with the organization’s new strategy.

NJHA has already signaled its changing role in the state, and CEO Cathleen Bennett, a former DOH commissioner, is a champion of innovation and population health efforts — aligning with Murphy’s goal of closing health care gaps in the state.

Murphy also said he knows the Affordable Care Act is imperfect, but an outright repeal would be a disaster since it currently protects many New Jerseyans and has provided an increase of jobs in the health care sector.

As a trade organization, in the past, NJHA has reacted to policy changes and advises legislators on new policy, critics have told ROI-NJ.

But the focus will shift to a more proactive and collaborative role in how the organization and its members operate, Bennett said.

She told the crowd she didn’t initially throw her hat in the ring for the CEO search when her predecessor, Betsy Ryan, announced her retirement. But after hearing of the changes NJHA was discussing, she wanted to join.

“The organization that inspires me is one that is collaborative and is transformative, ” she said. “Health care is clearly more than what goes on within the walls of a hospital. Just ask our fastest-growing member segment, community-based providers.

“NJHA has the opportunity to move beyond traditional boundaries by collaborating with groups across our state. Let’s … lead a conversation about not just good health care, but good health.”