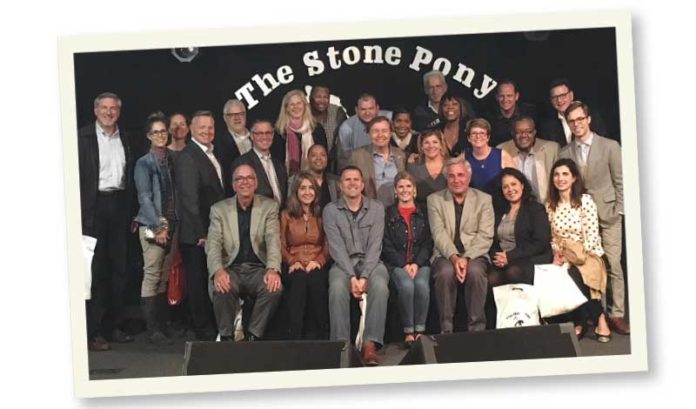 The three-county area has a population of more than 750,000.

Its business heads and officials from its numerous municipalities know they need to work together better, leveraging their strength as a region, but they can’t figure out the best way to do so.

And they face a perception problem.

Searching for answers, they went on a road trip … to New Jersey.

More than two dozen members of a delegation from Northwest Indiana recently came to the Garden State to see how New Jersey businesses and government officials face similar issues.

Leah Konrady, the CEO and president of One Region — a nonprofit 501(c)(3) that aims to help the counties of Lake, Porter and LaPorte, grow its business base, overall population and increase its household income by attracting and retaining talent — felt New Jersey would offer lessons her group could take back home.

After a three-day trip that included stops in Newark, Hoboken, Jersey City, Asbury Park and Trenton, Konrady said the visitors got all they were hoping for.

Including an appreciation for New Jersey business.

“I think Jersey is a really good example for us to look at in terms of investing in quality of place and placemaking,” she said. “So much of what we saw in Jersey was relatable to what we have going on here.”

Konrady said the use of public-private partnerships stood out.

A project, such as the refurbished Hahne’s building in Newark — which they visited on the second day of the trip — made an impression.

“The Hahne’s building resonates with us,” she said. “We, as region, do not have any place where we can say, ‘Now, that is something.’ Maybe there’s one building in one city, but not the collaboration that we saw behind the Hahne’s building of all these partners coming together to make an investment. The same was true with Military Park.

“Having seen where the city, the community leaders, the developers and higher education came together to create and foster investments was a real example to us of what we should be doing in terms of collaborations and partnerships to drive investments and placemaking.”

Konrady said the group was impressed by how Jersey City and Hoboken leverage their geographical relationship with New York City, how everyone in Newark seemed to have the same goal and same message, how Asbury Park has used its arts community and Shore location to revitalize its business district, and how Trenton is trying to lure millennials back to the city.

Dave Woerpel, a councilman from the biggest city in Northwest Indiana, Hammond, said he marveled at how New Jersey combined resources to get things done.

“My biggest takeaways were the ways you guys use grants and economic development,” he said. “That’s something we walked away saying we should do more of.

“Currently, for us, everything is on your own. Right now, it’s, ‘Why isn’t X municipality doing this?’ — and everybody points a finger at the municipality. That commonly happens. As opposed to having the collaboration that we saw in New Jersey in certain cities, saying it could be a grass roots-led effort, it could be corporations coming together, saying, ‘We want these investments,’ and really fostering collaborations, as opposed to why isn’t so-and-so doing something.

“In Newark’s case, the way they teamed up with Rutgers, and the things we heard about how that partnership helped to bring back a lot of economic development and spurred growth and revitalized your older buildings.”

Woerpel, in fact, said he’s already putting the lessons learned to use back home.

“Since I’ve gotten back, I’ve met with the chancellor of Purdue Northwest,” he said. “There’s a park in my district that has ball fields in it. They’ve agreed to let us use their design students to do a small project to prove that this can be done — to prove that a municipality and a university can work together.

“I’ve already found a grant where we can get two piers put in. Maybe their students can design a bridge to connect them. And maybe we can find some solar grants and use their students to design new pathways.

“It’s a small thing, but now I’ve seen how big it eventually can be.”

Konrady said the group has future plans to visit Pittsburgh and Denver, but said she was glad it started with New Jersey, an area she didn’t realize Northwest Indiana had so much in common with.

“Just like New Jersey, we have perception issues, both within our region and outside our region,” she said. “When people drive from Chicago through Northwest Indiana to get to Michigan or the beach, all they see are smoke stacks from steel mills and oil refineries, so their perception is that we’re dirty and not environmentally friendly. That’s not who we are.”

She admitted she had misperceptions about New Jersey.

“My favorite thing about visiting New Jersey was what I learned about New Jersey,” she said. “I was impressed with how welcoming and honest everyone was that I met with.

“I have lived all over the country, but had never been to New Jersey. I was really impressed with what I saw immediately, and I thought the Shore was absolutely beautiful.”

Then came the kicker.

“Honestly, my perception of the state and Jersey Shore was the MTV show.”

Connecting to the big city

You’ve got to see the view of New York City from Jersey City and Hoboken. And how these cities are viewed by New York City. We don’t have that with Illinois. We’re not as close to Chicago as Hoboken and Jersey City are to New York City, but we can still leverage our proximity through our transit and train system, and build the type of redevelopment that would attract people to live in Northwest Indiana. And here, especially in Jersey City, they are doing it in a way where you can still see the character of each neighborhood — what it was, and what they have been able to keep today.

You would be impressed with the accessibility of New York City from Newark Liberty International Airport. I sat outside for four hours (waiting for the rest of the party to arrive) and I couldn’t believe how car after car and trainload after trainload of people were coming and going to New York City. It made me think of our airport in Gary, which is 20 minutes outside of Chicago but totally underutilized. I thought, ‘We could have this, too. Look at what they’ve got compared to what I’ve got.’

We visited Roebling Lofts here. This is a great story for us, because it shows the willingness to take a risk and invest in a quality place where millennials and empty-nesters would want to live, in an attempt to bring them back into an urban area. It shows we’ve got to build it for them to come. We have to accept that people are going to live in Northwest Indiana and work in Chicago, but we have to create the type of atmosphere where it is OK to do that. If we create that livability, eventually it will happen where people live and work there.

Asbury Park is a really good story for us, because we’re on Lake Michigan. It’s a great example of how we can leverage our lakefront. We stayed at the Asbury and we met the mayor (John Moor). He was very honest and candid with us about some of the issues they had in the past and where they are today. The redevelopment of the downtown and how it’s been transformed over the past five years is something we can model. As is the blending of residents. They have residents who have been there for years, and now they have new people coming in, so, they are working to preserve the culture of what the city has been and was and where it is evolving today and creating a healthy mix of the two.

*These postcard “excerpts” are based on quotes from two people from Northwest Indiana who made the trip to New Jersey.