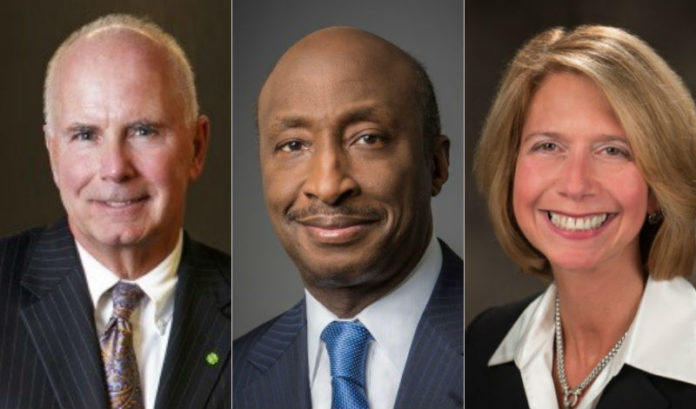 The New Jersey Business Hall of Fame announced Wednesday that a trio of prominent business leaders makes up its 2018 class of laureates.

This year’s inductees are:

The three, who will be inducted April 19 in New Brunswick, were selected by a committee of New Jersey business leaders after a public nomination process. The Hall of Fame is a creation of Junior Achievement of New Jersey.

“What an exceptional class of laureates,” Catherine Milone, president of JANJ, said in a prepared statement. “Kevin, Kenneth and Michele each embody the leadership qualities that the Business Hall of Fame selection committee looks for when selecting our new class. The JA student ambassadors are looking forward to presenting them with their awards and sharing their own personal growth through their journeys with JA.”

Cummings was promoted to CEO and president of Short Hills-based Investors Bank since January 2008, capping a career in the financial sector that also includes 26 years with KPMG LLP, as well as 20 years in community banking with Summit Bank, Valley National Bank and others.

Frazier has been with Kenilworth-based drugmaker Merck in a variety of executive roles since 1992, becoming president in 2010 and CEO in 2011. He also spent time with the law firm of Drinker Biddle & Reath in Philadelphia, among other roles.

Siekerka has run the Trenton-based business organization since October 2014, after spending several years in government. Under Gov. Chris Christie, she was a deputy commissioner and assistant commissioner with the state Department of Environmental Protection. She has also served with the Mercer Regional Chamber of Commerce, AAA and in law practice.