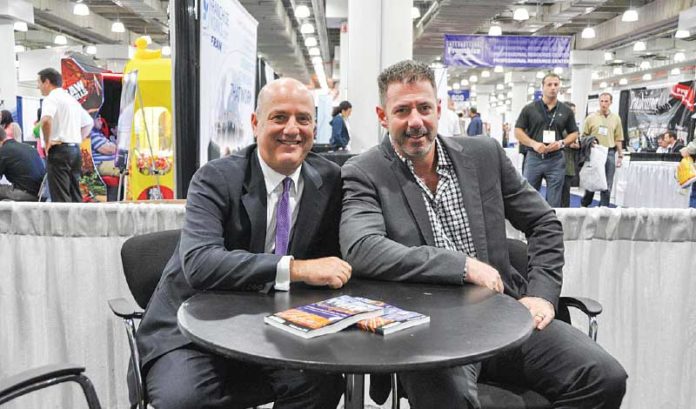 Working in his home state means much more than the proximity to major airports and highways, Thomas Portesy said.

When it comes to the trade show business, Portesy feels New Jersey is the place to be.

“Being in New Jersey allows us the opportunity to work closely with various media companies and operations for our shows while taking advantage of all the talent that exists here,” he said. “I mean, I’ve been part of international teams that meet daily, but I believe that this core group of people is the strongest trade show team I’ve ever been around.”

For more than a decade, Portesy — born and raised in Jersey City — has worked as CEO and president of MFV Expositions, an event planning company in Paramus that produces the country’s four largest franchise expositions and nearly a dozen premier trade shows around the world.

These events are instrumental in connecting would-be business owners with franchise concepts across industries, Portesy said.

“We’ve been a small, family-owned business, part of the largest trade show organizations in the world, and everything in between throughout all of our years,” he said.

His career, he said, has had many twists and turns.

Nearly 37 years ago — before the internet boom, Portesy said — a man by the name of Don Paladino began producing nearly 40 franchise shows in different markets throughout the U.S.

“If you were looking to purchase a franchise, you went to one of these shows,” Portesy said.

Portesy said he had signed up as an exhibitor with Paladino while he was working with an instant printing franchise, but later moved to Florida to produce car shows.

Meanwhile, Paladino’s company was acquired by Blenheim Exhibitions, an event-planning company in the United Kingdom, as well as H.A. Bruno in Fort Lee, a producer of successful shows in New York City that was owned and run by the Ianuzzi family.

That caught his attention, Portesy said.

While the company officially became MFV Expositions in 1997, it flowed through a plethora of mergers and acquisitions, including deals with Miller Freeman Inc., the Merchandise Mart properties in Chicago and Vornado Realty Trust, before it eventually was purchased entirely by the Ianuzzi family and sold last year.

As of July 2017, MFV Expositions operates as a subsidiary of The Comexposium Group, one of the world’s leading event organizers, which hosts more than 3 million visitors and 45,000 exhibitors in 26 countries around the world. The Comexposium Group itself is a subsidiary of the Paris Ile-De-France Regional Chamber of Commerce and Industry and of Charterhouse, one of the oldest private equity funds in Europe.

Portesy himself is now a stakeholder.

“With Comexposium, the opportunities that will present themselves are significant,” he said.

MFV Expositions, the franchise group division, operates within annual revenues between $15 million and $20 million, based on the success of its subsidiaries and partners.

MFV Expositions also produces shows in other industries, including one in the U.S. for converting and package printing, one in Mexico for promotional products and another for the auto industry.

One of its largest and most significant shows, however, is extremely close by.

The 27th International Franchise Expo will be held May 31-June 2 at The Javits Center in Manhattan. It is expected to draw more than 15,000 attendees from more than 80 countries around the world, and more than 400 exhibitors.

Admission costs $10 in advance and $20 on-site, and while some of the educational workshops require a fee of between $100 and $300, there are more than 70 free seminars and workshops for attendees.

“Those who come to the International Franchise Expo in New York City are often looking to acquire the master license rights to a franchise,” Portesy said. “Those are the people who are looking to take a Dunkin’ Donuts and open it up in Dubai, for example.”

There are plenty of first-timers, too, Portesy said.

“A lot of people are there to find out if franchising is an option for their business,” he said. “If your business is dependent upon your own skills and talents, it is most likely not able to be franchised. But, if you’ve come up with a system that can be duplicated and documented, and you can train someone and support their efforts, well then, yes.”

“Franchise companies pay us to have a listing as they would have a booth at our shows,” Portesy said. “We do that here in the U.S. and in eight other countries with strategic partners.”

“My job, for the most part, is to make sure that the resources and the support are there are for our entire staff,” Portesy said. “Our operations department, for example, makes sure that our venue is secure and that people such as the decorator and the electrician will be there; our show team sells our exhibition space and calls on franchise companies to explain to them what a great opportunity it would be for them to take part; our marketing department makes sure the information we send to the franchise companies is compelling and that, over the three days of the show, we’ve got qualified prospects walking through; our conference consultants make sure all of our speakers and workshops are what people are going to want to hear; and, then, at the heart of it all, we’ve got administrative and finance.

“Much of what I do is to make sure there are no roadblocks and hurdles by pointing out things that potentially could become issues down the road. Doing this as long as I have, there are not many mistakes I haven’t made, so I can point out those landmines before they become a problem.”

Portesy has a number of goals moving forward.

His main goal for this year is to shore up and integrate as much as possible all of the various groups MFV Expositions is responsible for in the U.S. and abroad by taking advantage of The Comexposium Group’s resources.

“Our show launch in Germany, for example, would have been very difficult to do without Comexposium’s offices and subsidiary in Germany,” Portesy said. “We are able to take advantage of those resources to make that happen.”

From there, Portesy plans to continue growing the company through various international launches, acquisitions and hosted-buyer conferences.

“We would fly in 15 restaurant franchise executives, for example, to a five-star location paid for by companies that are suppliers to that particular industry, like restaurant equipment companies and point-of-sale companies,” he said. “They’d be coming to meet with these people one-on-one.”

Portesy said as glamorous as his job may seem, it is the people whose lives have improved because of his shows that keep him motivated.

“I have had the luxury of meeting tremendous people who have started a business, found it to be successful, came to love what they do and, therefore, developed this desire to share their success with others through franchising,” he said.

“I also have had the privilege of meeting people at shows who found a business that changed their life and returned to our shows years later to say: ‘Life is wonderful as a result of what I am doing now. I’m here to possibly find another franchise.’”

Franchising touches every single industry in the world now, Thomas Portesy, CEO and president of MFV Expositions in Paramus, said.

Still, in which industry does Portesy see the most potential over the next year or so?

“Senior care, especially, is going to be a growing trend for quite some time, simply because the population is getting older,” he said. “At the show this week in Dallas, for example, we’ll have franchises in senior care, pet care and child care.

“Care franchises always will do well.”

In New Jersey alone, there are more than 17,000 franchise locations that provide more than 170,500 jobs and a gross domestic product of nearly $12 billion.

No wonder, then, according to the International Franchise Association, 73 percent of New Jersey voters want Congress and the administration to support small businesses by implementing government policies that promote and support local ownership of stores and restaurants over large corporate ownership.

“I think that’s extremely attractive to so many people today. Whether it is someone late in their career looking to do something for the next five years or it is a student just graduating college, franchising can provide opportunities for everybody.”