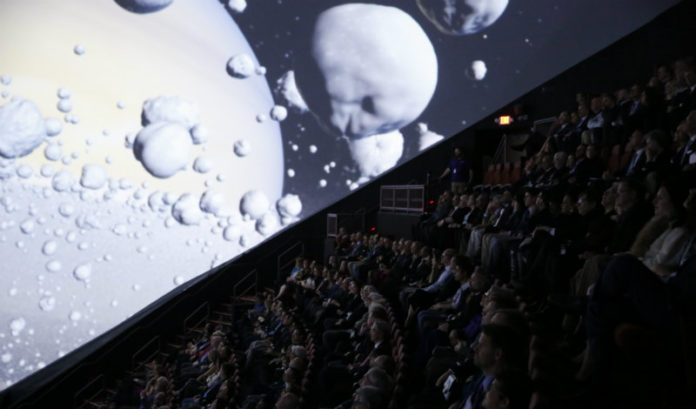 “When I was 8 or 9 in Westport, Connecticut, there was a person who let me look through his telescope at the rings of Saturn,” he told an invitation-only crowd of a few hundred Thursday night. “I had no interest in science before that. I thought he must have taped a photograph on the end of the telescope. I had to go around and check.”

The impact was as big as Saturn, Hoffman said.

“That flipped a switch in my brain,” he said. “And, though I didn’t end up an astronomer, I ended up in science because of that — and that’s what we try to do with the immersive experiences here.”

Hoffman spoke at an event that celebrated the 25th anniversary of the Liberty Science Center and formally celebrated the grand opening of the Jennifer Chalsty Planetarium.

Hoffman told the crowd the Chalsty Planetarium — which is the fourth-largest in the world and largest in the Western Hemisphere — not only has the ability to become a centerpiece of LSC, but also to achieve the ultimate goal of the center: inspiring the next generation.

“We’re not here to replace schools or replace the Discovery Channel or the people who do science education well; it’s really to have experiences, so maybe doing it will flip a switch and change your life.

“That’s why people go into science. It’s not because it’s important. They do that later. No 4-year-old decides he’s going to find a cure for cancer. It’s because you have a warm and fuzzy emotional connection to it, and that’s what we try to do here.”

Doing so isn’t easy. Or free.

Like all museums, LSC needs funding to not only maintain what it does but improve on it.

Thus, the event also was the soft launch of the public portion of a $25 million capital drive.

LSC began the drive last year and already has raised $16 million from its key supporters during what Hoffman called a “stealth capital campaign.”

Hoffman also honored and recognized Steven Howe, the U.S. chairman and managing partner of EY, and Jersey City Mayor Steven Fulop, for their support of both LSC and SciTech Scity.

Hoffman is hopeful more donations will follow. Their impact on the center, he said, would be noticeable to all.

“There are exhibition galleries that don’t represent cutting-edge science,” he said. “Our communications gallery on technology has 15-year-old technology. It should be not only technology today, but looking to what technology will be in the future, because we’re a state that stands for that.

“We need more areas for our younger guests. We have an incredible playground, Science STEAM playground, but it’s only operational during the summer. If we can build a canopy and a roof, we can handle the increasing number of guests we get.”

Hoffman said LSC also is trying to get six more co-chairs for its signature event in May, the Genius Gala.

More than anything, Hoffman wants to keep impacting the minds of young children.

The Chalsty Planetarium should do just that.

The 89-foot domed screen and seating for 400 is big enough to have impact. And to draw some of the biggest names in the business.

Mike Shanahan was brought in from Hawaii to be the director. He said he willingly gave up 18 years in paradise to return to his East Coast roots because of the size and stature of the planetarium.

Shanahan said the planetarium is committed to having skilled and knowledgeable hosts for each show — most planetariums play a tape — to add to the experience of the crowd.

“There’s nothing like being able to take questions and help fuel their curiosity,” he said. “And, with a live presenter, people tend to remain focused and stay engaged. You also can go in any direction depending on what they are into, such as black holes or Jupiter, and really bring it to life.”

(READ MORE from ROI-NJ on the Liberty Science Center’s plans.)

Shanahan said the center has hired three additional presenters (all from out of the area).

Shanahan said his job is to inspire all those who come in, not just the students who make up more than 250,000 of the more than 650,000 annual visitors.

“When we do school shows, it’s not only addressed to schools, but to teachers, because they have to set the standards and bring things to life after the kids go back,” he said.

For Hoffman, that’s the ultimate goal.

“We’d like to get to 25 co-chairs so we can truly transform this place into the best interactive science center in the world,” he said.

“In the last four years, attendance has gone up 53 percent,” he said. “We’re the fastest-growing established museum in the United States. We believe this incredible planetarium will grow our attendance even further and really establish ourselves as a tourist destination, as well as serving students and families in New Jersey.”

Inspiring other young kids along the way.

Of course, sometimes, a young kid still can inspire him.

Davis, a fourth-grader at the time, earned national attention last year when his job application to NASA to serve as its Alien Protection Officer (a real job, just not one with a job description you might think) went viral.

Davis did not get the job (which involves battling bacteria, not alien monsters), but he won the admiration of Hoffman.

Hoffman made a video message to Davis, offering him a job at LSC.