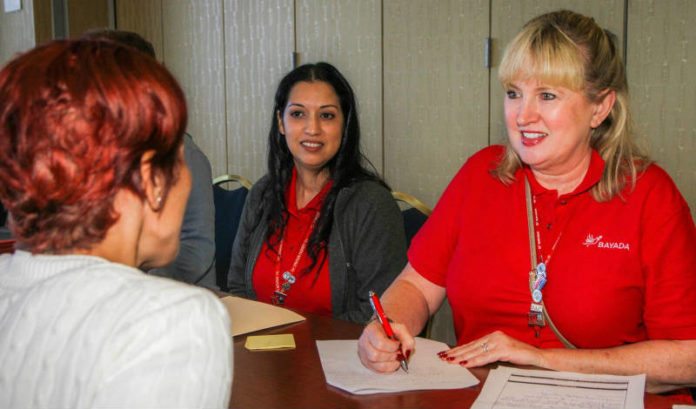 The Moorestown-based company spent the weekend of Jan. 20-21 at the San Juan Marriott Resort holding a recruitment event, which saw a turnout of more than 100 candidates and resulted in the company securing 26 commitments.

Bayada told ROI-NJ that there was overwhelming interest when the company launched a Facebook ad campaign — a suggestion by Puerto Rican native Frances Fernandez, who heads the Minnesota pediatrics department of Bayada — in December.

“Over the past several months, we have heard many stories of qualified, highly-skilled nurses in Puerto Rico who are out of work due to the destruction caused by Hurricane Maria, and have resorted to taking jobs in entirely unrelated fields to simply provide for their families,” said David Baiada, CEO of Bayada Home Health Care. “We have also been acutely aware of the families across the nation who are unable to get the nursing care they need due to the current nationwide home nursing shortage, a problem that is expected to intensify over the next several years.”

Since the hurricane devastated the island, there have been concerns about the number of able-bodied residents who have fled to places like Florida and the tri-state area, looking for work and continuing education for their children.

When asked if the company was concerned about criticism that it would be taking away nurses that the island needs to care for the many elderly who are left behind, as well as after the island begins reconstruction, Merari Singh, clinical manager of Bayada North Brunswick, said no.

“Our motivation in traveling to San Juan was to fill two urgent needs. First, to provide qualified nurses impacted by Hurricane Maria with real opportunities to return to the field they love and, second, to fill openings back in Minnesota for clients who are in need of in-home care,” Singh said. “There are so many in need right now on the island, and we don’t feel as though we are draining the island of resources, but instead creating opportunities for those who are interested and providing those we hire with temporary relief from this ordeal, along with the ability to send resources back to their families in Puerto Rico over the next several months.”

There were some concerns from the applicants, including what life and the public school system are like in Minnesota, Singh said.

“We are doing everything we can to create a support system for our new hires and their families, ensuring a smooth transition to a new culture and climate,” Singh said.

And the interest from the recruitment campaign has not waned.

“We are still receiving calls and emails from nurses in Puerto Rico who are interested in moving to Minnesota to work for Bayada. So far, Bayada has commitments from 26 nurses, and will be following up with an additional 12 nurses who expressed interest,” Singh said.

In a statement last week, Bayada said that, in exchange for a commitment of a year to 18 months from the nurses who relocate to Minnesota, Bayada will provide compensation and benefits on par with current employees in the state, as well as cover the cost of airfare, provide 30 days of free housing and offer a mentor to help acclimate the nurses to the region.

“From a father who volunteered his time to saving lives in remote areas of the island immediately following Hurricane Maria, to a single mother who traveled two hours to interview with the hopes of providing a new opportunity to her two daughters, we met so many resilient nurses who are eager to get back to work in the field they love,” Fernandez said. “We look forward to welcoming these men and women, and many of their families, to Minnesota, and we are doing everything we can to ensure they enjoy a smooth transition into our community, including the assistance of a stable and reliable support system of fellow Bayada employees, friends and neighbors.”

We’re 3 months from COVID’s peak — and statistical drop is...

In Pa., indoor dining capacity will soon jump to 50%