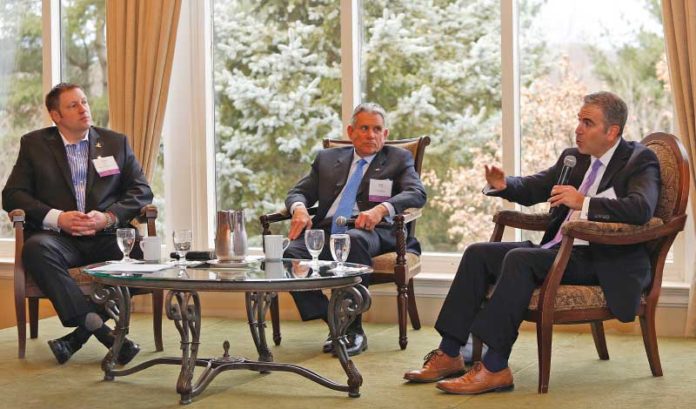 Who here currently has a cannabis business?

Who here has a cannabis vertical in their current business as a service provider?

Each question — posed to the audience at ROI-NJ’s Thought Leadership Series, “The State of Cannabis: A Green Rush is Coming to New Jersey” — got only a smattering of hands from those at Mayfair Farms in West Orange.

For the three panelists, it marked a potential missed opportunity for business.

“You need to wake up and catch up; it’s plain and simple,” said Cunic, who has started five cannabis businesses of his own and helped countless others in multiple states do the same. He is the CEO and co-founder of davidcunic.com, a site devoted to the business of cannabis.

Bill Caruso, an attorney at Archer Public Affairs who has been involved in cannabis for as long as anyone in the state, said the loss for business could be more than just a missed opportunity in the industry. Caruso feels those in the professional services sectors who choose not to be involved in cannabis could end up losing some of the business they already have.

“My firm is taking a look at this because it makes sense for our clients,” he told the audience. “If one of our current labor clients calls us and says, ‘Hey, we want to rewrite our office manual because (Gov. Phil) Murphy has legalized marijuana and we don’t think our office manual addresses this: What do we do?’

“We have two answers: 1) Come on in and sit down and we’ll rewrite it for you. Or 2) We don’t do that kind of work, that’s not our specialty.’

“That could be a blue-chip client we’ve had for two decades, and we’ve just told them, ‘We can’t help you with this new change in policy.’ They’re going to find someone who can. My guess is that they are going to call us back later and ask us to send the rest of the files to that new firm, too.

“That’s what you have to be thinking about here: Your clients want your advice, your counsel and your help in developing where they are going to go next. How to protect themselves, how to make sure they are going to dive into this the right way. If you don’t help them, somebody else will, I guarantee it.”

Rick Frimmer agrees. As the head of EisnerAmper’s national cannabis group, the San Diego-based attorney and CPA has closely monitored the industry nationwide.

Frimmer told the crowd he knows there is uncertainty in the industry, but he also knows the industry is not going away.

“We’re being cautious about it, but we’re definitely taking on clients,” he said. “This train has left the station; it is just a question of how many stops is it going to make along the way.”

Caruso feels New Jersey is primed to be a big player in the industry. And he actually feels the uncertainty about the industry on a federal level — U.S. Attorney General Jeff Sessions cast doubt on how much the federal government will intercede earlier this month — is a plus for the state.

“The reason I’m excited that there is this prohibition on interstate commerce right now (is because) that means there is a lot of opportunities here in New Jersey. And, let’s talk about this from a pure business standpoint. If you want to locate a marijuana business in New Jersey, you need to do it soup to nuts. We can’t ship it in from California, we can’t grow it over in Pennsylvania or manufacture it in Delaware and bring it here, it’s got to be everything here in New Jersey.”

That policy, Caruso said, eventually will be altered — hurting small players in the game, he said.

Once it goes federal, Caruso said, bigger players will come in, wanting to take advantage of all of New Jersey’s assets — strong shipping and transportation hubs, pharma and agricultural economies that are ready to lead the way in medicinal advances, a highly trained workforce and access to phenomenal wealth and investors.

The potential is that great, he said.

“I did a study on this,” Frimmer said. “There are only two industries that have grown 400 percent in two years: alcohol and gambling.”

But don’t be fooled, Caruso said: The business of cannabis is about a lot more than growing and selling.

(READ MORE from ROI-NJ’s event on cannabis and banks, and audience questions.)

“You have to educate your own workforce and partners,” he said. “I talked to a guy the other day who is not in favor of legalizing cannabis. He’s in packaging.

“He said, ‘I’m never going to be involved in this.’

“I said, ‘Would you sell your packaging to a manufacturing facility of it?’

Caruso said Archer & Greiner is taking stock of the possibilities.

“The question (for clients) is: What are you involved in, and let’s talk about your nexis,” he said. “We’re involved in a ton of commercial real estate entities, there is a significant glut in that space, suburban areas, office parks, industrial spaces — the stuff Amazon doesn’t want. We represent these clients. We are not doing our job by not advising them of the opportunities that they might not even be aware of, what’s coming.”

Now is the time, he said.

“I think (there is) the ability for small entrepreneurs, for minority interests in the state to get involved right now,” he said. “The new licenses that are going to come out in the Department of Health in the next couple of weeks and months are not going to require vertical integration, basically having everything under one tent.

Cunic said New Jersey needs to be ready. All industries in New Jersey.

For his last point, he didn’t even need to ask the question.

The answer told the story of the opportunity.

“Look at the number of how many human resources companies are out there to hire in the cannabis sector,” he said. “There’s less than 20.”

We are going to have an expanded medicinal effort; there will be more dispensaries, there will be more conditions and there will be a lot more offerings in terms of what can be purchased in these stores.  That’s happening now. We will have legalization of cannabis on the books, through statutes of law, by the end of this fiscal year, by June 30. I suspect we will allow those already in the medicinal space to begin selling. As quickly as folks can get here and start a grow season, you’ll see this growing. I think by the end of 2019 you’re going to see a real robust cannabis industry in New Jersey.

I think by the second quarter of next year we’ll have legalization in New Jersey and we’ll have the new department of government needed for legalization.

A timeline of events involving the legalization and prosecution of cannabis:

The Financial Crimes Enforcement Network, or FinCen, released a memo that said: “The decision to open, close or refuse accounts should be made by each financial institution based upon facts applicable to that institution.” It said banks should do their due diligence, providing eight factors to consider before filing a suspicious activity report, or SAR.

Colorado and 29 other states have legalized either medical cannabis, recreational cannabis or both.

The amendment prohibits the Department of Justice from spending funds to interfere with the implementation of medical cannabis laws. The amendment, introduced in 2001, became law in December 2014 as part of an omnibus spending bill. It has been renewed every year since.

As of March 31, 2017, FinCen has received nearly 30,000 SARs that included the phrases “marijuana limited,” “marijuana priority” or “marijuana terminated.”

Sessions wrote: “It is the mission of the Department of Justice to enforce the laws of the United States, and the previous issuance of guidance undermines the rule of law and the ability of local, state, tribal and federal law enforcement partners to carry out this mission.

“Therefore, today’s memo on federal marijuana enforcement simply directs all U.S. attorneys to use previously established prosecutorial principles that provide them all the necessary tools to disrupt criminal organizations, tackle the growing drug crisis and thwart violent crime across our country.”

Striking a balance: Law firms are busier than ever — and...

He’s a lawyer (and a former college football player): Here are...