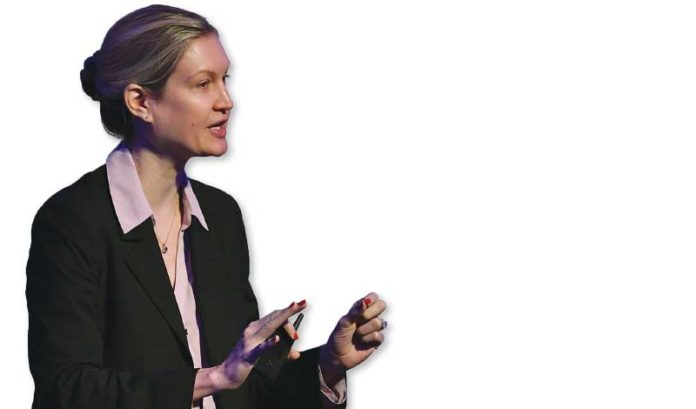 The trillion-dollar question of the day was this: Is the economy as great right now as everyone says?

“We are on solid, stable footing,” Lindsey Piegza, chief economist and managing director at Stifel Financial Corp. in Chicago, said as she presented her economic research to the audience. “We are not talking about an overly robust recovery or an overly aggressive economy, but a stable one.”

“We think the U.S. economy will probably grow around 2.75 percent in 2018, with a global economy about a percentage point stronger than that and year-over-year consumer spending up between 5 and 6 percent,” he said. “But markets are a pretty unforgiving place. If you can figure out what you’re missing, you have a fighting change of staying a step ahead, but if you get complacent, the markets will make you pay.”

Wilbur L. Ross Jr., the current U.S. secretary of commerce and former chairman or lead director of more than 100 companies operating in more than 20 different countries, said he believes that, due to increased regulatory reform, the economy will continue to improve.

“There were more than 4,000 regulations that we’ve either canceled or delayed the implementation of, all of which impose great cost on business, interfere with decision making and are a big drain on the economy,” he said.

Ross spoke via video conference due to unexpectedly needing to be in Washington, D.C., in anticipation of the government shutdown. His words, however, resonated with the audience.

(READ MORE from ROI-NJ on the economic forum.)

“The reason why executive and consumer confidence has gotten so strong under the (President Donald) Trump administration is that everybody is conscious that this regulatory burden has been lifted,” he said.

More than 500 guests attended the event — a record, according to John E. McWeeney Jr., CEO and president of NJ Bankers, and Robert H. Doherty, New Jersey state president of Bank of America.

“As the biggest bank in New Jersey, we’ve got a unique perspective on the economy, because we are doing business at Bank of America with more than one out of two households in New Jersey and more than one out of three commercial entities,” Doherty said. “We believe that gatherings like this economic forum are important to ensure that we are all educated on where the state stands on important issues to help our leaders develop policies that will propel us forward.

It is not every day that you hear a banker express gratitude for increased regulations.

“I think, in the financial industry, we are undeniably in a much stronger position than we once were,” Greener said. “We’re on very solid footing, and I think we must give the regulators in our country tremendous credit for moving as quickly and boldly as they did to ensure our financial system was strong.

“Risk has been reduced from what it was before the (financial) crisis.”

Here were her findings: