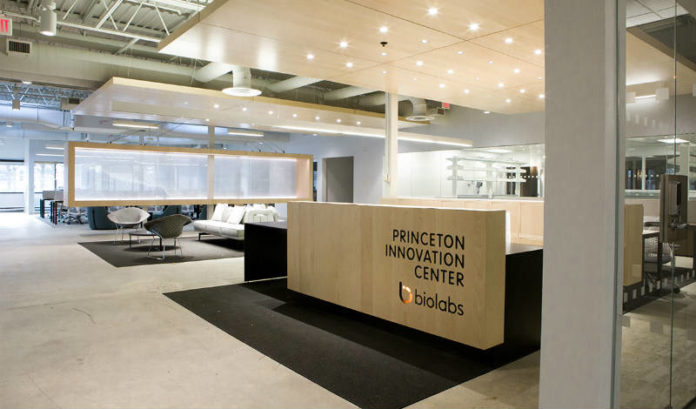 A catalytic ecosystem is rapidly growing at Princeton University, according to Paul LaMarche.

That is why Princeton University, in its latest effort to cultivate and grow innovative ideas, has partnered with BioLabs, a professional lab management company based in Cambridge, Massachusetts, to open Princeton Innovation Center BioLabs, a 31,000-square-foot business incubator and coworking space for more than two dozen science-based startups and nearly 200 entrepreneurial employees.

Princeton Innovation Center BioLabs is strategically designed to promote collaboration not only through the daily work of its resident entrepreneurs, but through communitywide educational programming and networking events, Johannes Fruehauf, co-founder and CEO of BioLabs, said.

“We are excited to implement our model here at Princeton University, which is one of the best-known universities for scientific research and engineering,” he said.

Since its founding in 2009, BioLabs has helped to form and launch more than 230 companies and 800 jobs by enabling science-based startups to work faster toward commercialization with limited investment capital.

“Developing such companies is very costly, especially if they require access to labs and expensive scientific equipment,” Fruehauf said. “It makes sense to share such facilities among dozens of users, especially since most startups only need them for a period of time before they raise the money to grow.

“The coworking model can reduce science startup costs by a factor of 10 and accelerate the timeline for setting up a lab facility by six to nine months.”

“It became very clear to us that their company values closely aligned with what we wanted to adopt in our facility here,” he said.

BioLabs, which currently manages additional spaces in Massachusetts, New York, North Carolina and California, evaluates applications based on the underlying science and engineering aspects of an idea, the viability and scalability of the business plan, the experience and knowledge of each team member, and the ability to obtain grant funding and attract business investors.

“We then have selection committees, typically consisting of individuals with scientific, entrepreneurial and academic experience, which meet with the applicants who make it through our filters,” Fruehauf said. “That is because a fabulous thing happens on our sites — the creation of an inspired, entrepreneurial community that shares the intense experience of the ‘startup’ life.

“Our resident companies are not only able to tap into their peers’ networks, as well as BioLabs’ added network of mentors, but also have the benefit of traveling to our other sites as well.”

Princeton Innovation Center BioLabs is located at Princeton Forrestal Center, about three miles from campus, to not only be easily accessible to faculty, students and alumni but to the wider New Jersey scientific community as well.

The center offers 68 wet- and dry-lab benches and a broad array of premium scientific equipment for chemical, biological, pharmaceutical and engineering development, as well as multiple desks, offices, conference rooms and private labs for related ventures. It also offers additional serves and amenities for its resident companies, such as a freezer room and rooms designed exclusively for tissue and bacteria cultures.

Per-bench and per-workstation costs start at $1,500 and $300 per month, though companies with flexible membership terms can scale from a single bench to a private lab as they grow.

The facility’s grand opening is slated for April.

“We hope that the Center will not only become a magnet for Princeton alum and faculty but also for entrepreneurs from the Philadelphia and New York City areas who want to travel to and start their businesses here,” Fruehauf said.

Johannes Fruehauf, co-founder and CEO of BioLabs, said that, while the intention is not to handcuff resident companies to New Jersey, companies who get their start at Princeton Innovation Center BioLabs will be more likely to maintain their presence here.

“Their early employees will live around here; their business relationships will be created around here,” Fruehauf said. “Once they are planted here, we don’t actually need to put the handcuffs on — we just need to make it easy and logical for them to do business here.

“In Cambridge (Massachusetts), for example, we have graduated about five dozen companies so far. All but one have stayed in state and all but three or so have stayed within four miles of our center.”

“The types of companies that we start at these facilities are very dynamic and typically create very meaningful jobs,” he said. “It is very desirable for a state and a region to want to help build and retain such companies here.”

It is just as attractive for New Jersey companies to want to partner with Princeton Innovation Center BioLabs, Debbie Hart, CEO and president of BioNJ, the 400-plus member organization and advocate for the state’s biotechnology industry, said.

“We are beyond thrilled that this is happening and are very anxious to see Princeton Innovation Center BioLabs be super successful,” Hart said. “It does take incubators to assist in the creation of companies and that is currently one of New Jersey’s greatest challenges.

“It is essential that we keep these companies here and that will be a huge part of the role BioNJ plays in its partnership with Princeton going forward.”