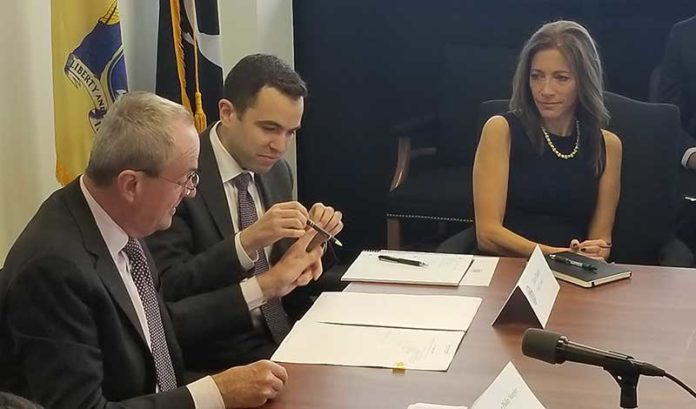 Wind energy appears to be coming to New Jersey.

Gov. Phil Murphy on Wednesday signed an executive order directing the New Jersey Board of Public Utilities to fully implement the Offshore Wind Economic Development Act and begin the process of moving the state toward a goal of 3,500 megawatts of offshore wind energy generation by the year 2030.

“We cannot allow for stagnation in this growing sector of our energy economy, and we cannot lose sight of the tremendous opportunity for offshore wind at the Jersey Shore,” Murphy said in a statement. “With this executive order, we begin the process of making New Jersey a leader in offshore wind, a critical step toward achieving our clean energy goals.”

In 2010, former Gov. Chris Christie signed OWEDA, which allowed state agencies to craft an Offshore Wind Renewable Energy Credit program. Since then, however, no offshore wind developers have obtained the necessary approvals from the BPU.

Murphy’s order, his eighth since taking office, directs the BPU to begin the rulemaking process to fill the gaps in the current regulations governing the OREC program. The order also directs BPU President Joseph Fiordaliso and New Jersey Department of Environmental Protection Commissioner Catherine McCabe to work together to establish an Offshore Wind Strategic Plan for New Jersey.

The plan will focus on critical components of offshore wind development, including job growth, workforce development, data collection and appropriate determination of facilities, as well as ensuring that natural resources are protected, Murphy said in the statement.

“Today, Gov. Murphy signed an executive order committing to 3,500 MW of offshore wind generation in New Jersey by 2030,” he said in a statement. “This is great news for the people of New Jersey and a positive step forward in bringing offshore wind to the state.

“As the global leader in offshore wind, we look forward to working closely with Gov. Murphy, his administration, members of the Legislature, local leaders and the New Jersey Board of Public Utilities to bring offshore wind to New Jersey with our Ocean Wind project. Offshore wind will be a reliable part of New Jersey’s energy mix and can be delivered at utility scale, right into areas of high customer demand while also creating skilled jobs and an economic boom for the region.”

(READ MORE from ROI-NJ on Ørsted’s plans for the Jersey Shore.)

Under the order, the BPU will implement the OREC program by approving financial plans submitted by offshore wind developers. After the creation of a process to approve such plans, the BPU will issue a solicitation calling for proposed offshore wind projects for the generation of 1,100 megawatts of electric power — the nation’s largest such solicitation to date. Finally, the executive order instructs the BPU to engage with neighboring states on the potential benefits of regional collaboration on offshore wind.

“Our goal is to grow offshore wind in a way that creates jobs and reduces our dependence on fossil fuels,” Murphy said. “New Jersey is committed to growing our clean energy sector, and offshore wind is at the crux of increasing that part of our economy.”

Is N.J. a Top 10 place to work? Progressive organization feels...