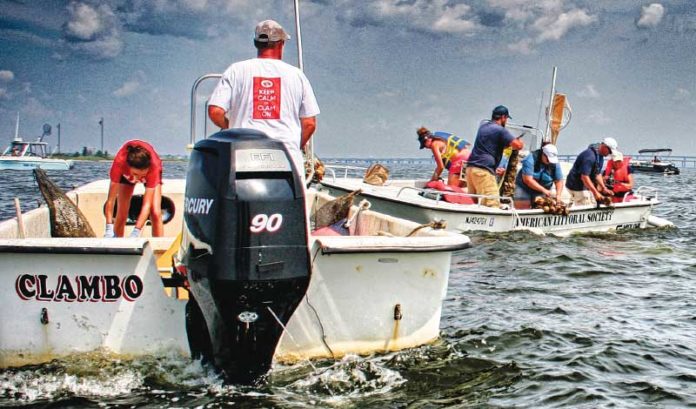 Lionel A. Walford, director of the Sandy Hook Marine Laboratory (which later became the National Oceanic and Atmospheric Administration’s James J. Howard Marine Sciences Laboratory), founded the American Littoral Society in 1961, intending that the organization would become a bridge between science and the public.

We are working to continue to provide guidance on new environmental practices that will help private landowners and government decision-makers adopt ways of living more sustainably along the shore.

In addition to promoting the study and preservation of marine life and habitat, the Littoral Society seeks to advance the National Ocean Policy program, which began by executive order in 2010 to coordinate the agencies involved in managing U.S. coastal waters and the Great Lakes; improve water quality, from inland streams to bays and oceans; execute conservation and restoration projects intended to improve coastal resiliency; remove marine debris; and ensure beach access to all citizens through political advocacy and legal avenues.

In the late winter and early spring, the Society organizes dune grass plantings with schools, clubs and corporations.

The Society’s education department partners with Monmouth County schools and is always looking to expand its reach. The Society also offers individualized marine science programs for scout troops, “Close Encounters with the Coast” for other organizations, nature walks and summer camps for middle school children.

The Society’s National Ocean Policy work also marked major milestones in 2017, as Ocean Action Plans were developed and approved for both the Northeast and Mid-Atlantic regions.

The American Littoral Society is a membership-based organization, so a portion of annual operating funds comes via dues. However, the organization’s work is also funded through a variety of government and private foundation grants, as well as charitable contributions from individual donors.

Donors include the Gordon and Betty Moore Foundation, the Geraldine R. Dodge Foundation and the William Penn Foundation. We also have partnerships with the National Fish and Wildlife Foundation, the states of New Jersey and New York, various federal resource agencies and a diverse group of private benefactors.

If you want to really learn of the amazing natural resources along the coast, such as seals that visit during the winter, come along on one of our many field trips.

Where: Despite a Highlands mailing address, the American Littoral Society is based on Sandy Hook, in the Fort Hancock section of Gateway National Recreation Area. The Society also has offices in Millville; Jamaica Bay, New York; Sarasota, Florida; and Boston.
Serving: The society runs education, conservation/restoration, and advocacy programs out of every office except Boston.
Key members: Tim Dillingham, executive director; Pim Van Hemmen, assistant director; Kathleen Gasienica, president of the board of directors.