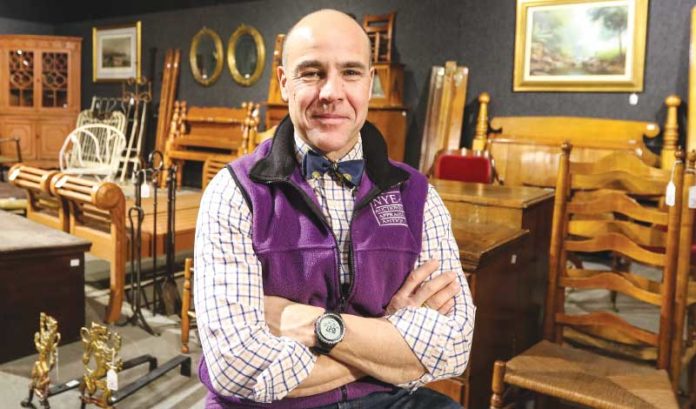 The unassuming oil painting of a fainting lady — found stored beneath a pool table in an estate in Essex County — was just 12-by-10 inches.

No one inquired about its condition or asked for more photos or documentation during the two-week preview period leading up to its public sale in 2015.

So, when John Nye, president and principal auctioneer at Nye & Co., began the bidding on what was known as Lot 216, he started at $250.

At least two bidders knew the truth about the painting. And, perhaps unsure of how much others knew of its background, the bidding began slowly, jumping in the usual increments until it reached $10,000.

From there, it picked up.

By the time it was done, the painting sold for $1.1 million.

“It turned out to be one of five allegorical works that Rembrandt painted as a teenager, each one representing the human senses,” Nye said. “Three already were known — this was one of the missing paintings.”

It was the most lucrative item his business has found so far, Nye, a specialist in American furniture and decorative arts and frequent appraiser on PBS’ “Antiques Roadshow,” said.

The auction was one of the first since Nye had expanded his business’s auction venues online.

And, while his auctions still attract bidders from all over, Nye said the bulk of business for his full-service public auction and appraisal house in Bloomfield comes from the trust and estate community in the tri-state area.

Like the Rembrandt, Nye feels the level of work at local auctions are hidden treasures.

“Many people who live in New Jersey have the mistaken impression that, to buy quality items, they must buy in New York City,” Nye said. “They feel the need to deal with legacy auction houses to find what they are looking for when they can find it right off the Parkway.

“We are a top-rate auction house that can both liquidate and appraise collections and estates.”

Nye & Co. works with several hundred clients annually, including celebrities (such as the estates of Luther Vandross and John Birks “Dizzy” Gillespie), major corporations (such as the Port Authority of New York and New Jersey) and private collectors and museums (such as the Newark Museum).

Nye previously had spent 15 years working his way up from loan portfolio manager to senior vice president and department head of the American Furniture and Decorations department at Sotheby’s, one of the world’s largest brokers of fine and decorative art, jewelry, real estate and collectibles, in New York City.

“I felt like I had accomplished what I had set out to do and was ready for a new challenge,” Nye said.

So, he and his wife, Kathleen, acquired what was then Dawson’s Auction House in 2003 before moving to Bloomfield and renaming the company seven years later.

Today, the duo continues to work together with more than a dozen employees in New Jersey, Long Island and Florida to acquire paintings, furniture, rugs and carpets — any and all tangible, personal property — for sale at auction.

“We handle everything from single items to whole estates and do the full gamut of paperwork from market value and insurance to divorce and equitable distribution,” Nye said. “Then we host about a dozen standard auctions per year and quarterly auctions of small, curated sales.

“We are essentially business partners with our consigners, who know that their best interest is our primary objective. If they’re not making money, neither are we.”

Nye & Co. is particularly known for its one-of-a-kind acquisitions, Nye said, which frequently are on display at its 25,000-square-foot space in Bloomfield.

“People check in with us because they know we get fresh merchandise, and, by that, I mean, property that has not previously been on the market,” Nye said. “It’s largely estate property that has been out of circulation by sitting in people’s homes rather than coming from dealers who are trying to jettison stale inventory.”

In addition to growing their auctions, Nye said he also would like to further develop his appraisal business.

“I would like to grow it to the point that it becomes a larger, stand-alone business,” he said. “That’s something I strive to accomplish over the next five years.”

He has his work cut out for him, Nye added.

“The internet certainly has affected what is arguably one of the oldest businesses in the world,” he said. “To participate in an auction, you used to have to be in the room. But to provide purchasers with greater convenience, the industry started offering absentee bidding, then telephone bidding and, now, real-time internet bidding, in which anyone in the world can participate.”

That is, however, how the Rembrandt was discovered by the right bidder — someone who already owned two of the other paintings in the collection.

“After it was purchased, the painting traveled to Holland, the Getty Museum, Oxford University, the Louvre, Shanghai,” Nye said. “And every time it moves, the story keeps bubbling up.

“It’s given our business a good bump.”

John Nye, president and principal auctioneer at Nye & Co. in Bloomfield, said he can think of no better place to run his business.

“New Jersey is a densely populated state just outside of Manhattan — selling and buying is not tough to do here,” he said. “Also, New Jersey is a state with a net loss of population year over year.

“When people move out of state for one reason or another, they often call us for downsizing assistance and to begin the liquidation of their tangible assets.”