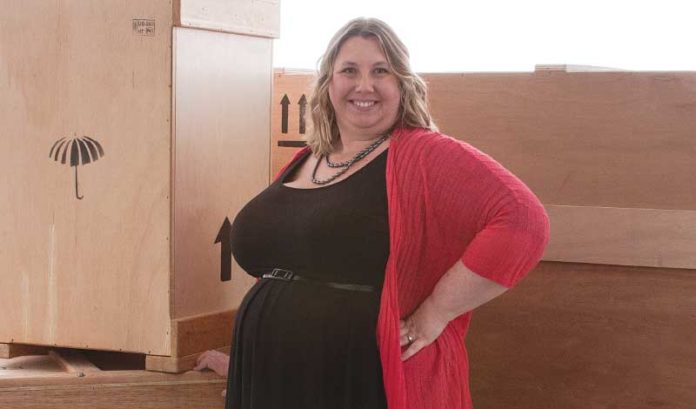 But when a piece of art leaves its creator’s easel, it has to be confined in some sense. A thriving segment of the local business community does just that.

“When you see a pretty painting in a museum, it didn’t just appear there,” said Melissa Osterwind, an executive at art storage and transportation company SRI Fine Art Services in Clifton. “Someone had to get it there. That’s what we do.”

If you thought getting art to a gallery was simple, think again.

“It’s kind of an obvious thing — but people might not perhaps think about it — artwork was not meant to travel; art was meant to hang on a wall,” said Jonathan Schwartz, who also heads a company in this sector.

And the art of storing paintings and sculptures as well as moving them around is getting more complicated as artists continue to do their boundary-pushing.

Osterwind, who is chief operating officer at SRI, said companies in this sector have had to keep up with the particularities of handling the work of contemporary artists — since it can’t be assumed today that a painting will be oil on a canvas.

“We’re always having to stay current on what the right way to handle art as the art itself changes,” she said. “There are so many forms today of art materials. People are working with things like neon. That’s a medium that’s becoming more popular, and we have to adjust to handling it.”

Although the businesses in this sector may have some of the familiar aspects of a logistics company, such as trucks and large storage warehouses, the fact that those in this sector have an esoteric knowledge of, for example, the potential of plastic wrap to damage an acrylic-based painting, makes them quite different than related industries.

The companies also have to invest a lot of resources into maintaining the right climate for art (50 percent humidity and 70 degrees Fahrenheit, that is). On top of that, the companies invest in top-notch security systems and do regular background screenings of employees to ensure the protection of possibly renown artworks.

Companies in this competitive sector look to have the most thorough confidentiality arrangements in place to attract more business from wealthy art collectors. But these businesses see it as having another purpose as well.

“To a certain extent, these people are cultural guardians … keeping this art safe for future generations,” Osterwind said.

Osterwind said the market for these services is becoming more competitive in New Jersey, given the plethora of available warehouse space in the state and its easy access to art-crazed New York City.

“Especially in the past few years, the art market has really grown in the region,” she said. “By proxy, we’ve grown with it. For us, we’ve doubled in size since about 2009.”

Schwartz, who is CEO and president of Atelier 4, said it’s a market that fluctuates like any other.

“It’s an unregulated business that’s probably closer to real estate than any other industry,” he said. “What we’re dealing with are often expensive, tangible assets that are usually in someone’s estate.”

In fact, the real estate industry — real estate investment trusts, in particular — have been discovering the art storage business.

Schwartz said large real estate companies have been buying their way into this sector for additional income-producing commercial properties. Several smaller companies in the region’s art storage and transportation sector have been acquired recently.

“For the past several decades, my industry was made up of mom-and-pop companies,” he said. “Many of us who have been in it for a while have long wondered who would do a consolidation of this industry. But now it’s finally happening — but from the outside.”

Schwartz said things are much different than when he first got into the industry and started delivering artwork across the country as a 23-year-old who just had a passion for art.

“And it has been the same story for most of our competitors,” he said. “But that’s all changing. So those of us industry have to constantly re-evaluate what we’re doing to keep up.

“What won’t change is our commitment to being the guardians of art for our cultural legacy.”

A sticker on the back of the painting should do just fine. That’s the misconception anyways.

When it comes to someone passing their art collection down to beneficiaries, people don’t tend to feel the need to get too formal, according to Michelle Bergeron Spell, a partner in the trusts and estates practice at Chiesa Shahinian & Giantomasi P.C.

“It has been something traditionally overlooked,” she said. “There’s a belief that you can make an agreement with children about who gets what, and that they’ll just take it out of the house and be just fine.”

A trip to the auction house, if the piece is being sold, would be all that someone needs to realize the importance of having an official title for the artwork.

“And just taking it off the wall doesn’t establish title,” Spell said. “The auction houses are getting more savvy. They know there’s a tax lien placed on assets in an estate when a person passes away. Nothing has to be done on the part of the IRS to make it valid.”

There are certain tax benefits to handling art in accordance with the directions of a will, which Spell said is all the more reason to have a conversation about it.

“For many reasons, it shouldn’t be an afterthought,” she said. “It should be planned for; so, it can be passed on the way you want it to be.”