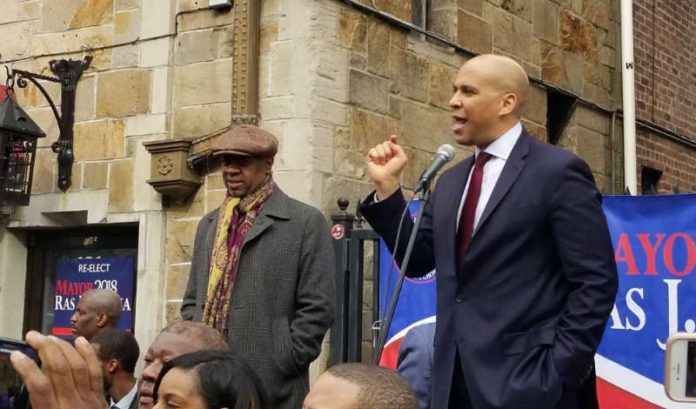 Moments after a raucous political rally celebrating his official entry into the race to be re-elected as mayor of Newark, moments after he rattled off a list of successes from his first four years — everything from achievement in the classroom to reduction of crime to unimaginable economic development — Newark Mayor Ras Baraka admitted one thing.

Sometimes, even he can’t believe the recent run of success for the city.

“Some of the (things we’ve accomplished) is surprising, honestly,” he said. “You work hard, you try to reach these targets, and I just thank God that we’ve done the things that we’ve been able to do.”

In his speech, Baraka noted the high school graduation rate in Newark is up — as is the number of Newark kids attending Rutgers University. Unemployment is down while the number of summer jobs for youth is up. Development is up and crime is down.

Baraka proudly boasted that, not only is the homicide rate down, but so are arrests.

“We arrest less people, but our crime is still going down,” he told the crowd. “That’s testimony that you can constitutionally police communities and still get results.”

Newark will hold a general election for mayor May 8. A runoff will take place on June 5 if no candidate wins a majority of the race.

As of now, only one other major candidate has entered the race, Councilwoman Gayle Chaneyfield Jenkins, a former Baraka supporter who has since broken away.

The deadline to file is March 5.

Challengers figure to face a tough fight to unseat Baraka.

And, although Baraka has taken the lead in the city’s fortunes the past four years, he said the city’s successes are about more than him.

He thanked members of the council during his speech, then thanked others in the community afterward.

“I have to say, most of the stuff that’s happening is because of a collaboration,” he said.

“I think because the private sector, the university community, the philanthropic community has come together; everybody has really been gracious and making it feel like one city and helping us get a lot of these things done.

“This community really came together to move the city forward and it’s heartfelt to me that they happened.”

Looking forward, Baraka said there is plenty more than can be accomplished.

“There’s a lot more stuff that we need to do,” he said. “Making sure we spread the development that’s happening here further into the community is probably the No. 1 goal.

(READ MORE from ROI-NJ on Cory Booker and Newark.)

“Trying to make sure we reduce further the unemployment rate in the city and trying desperately to reduce poverty and unemployment the best we can are the things that I think we can do.”

“I feel I am one of those people who is uniquely qualified to talk about what is excellence in mayoral leadership,” he told the crowd. “I have walked some shoes and I know the challenges of the job and the demands of the job and I know that the great leaders of our city are those who are servants of them all.

“I know what great leadership is, and I’m here to tell you right now that we, the city of Newark, have a great mayor in Ras Baraka.”

Baraka, at times holding back his emotions on stage, said he was honored by the tribute.

“I’m humbled by the love and the turnout here,” he said. “We turned in 13,000 petitions to the city clerk. It shows that the people of this city believe in the four years that we just experienced, and they want to have another four years moving forward.”

Bruck to serve as acting attorney general for remainder of Murphy’s...