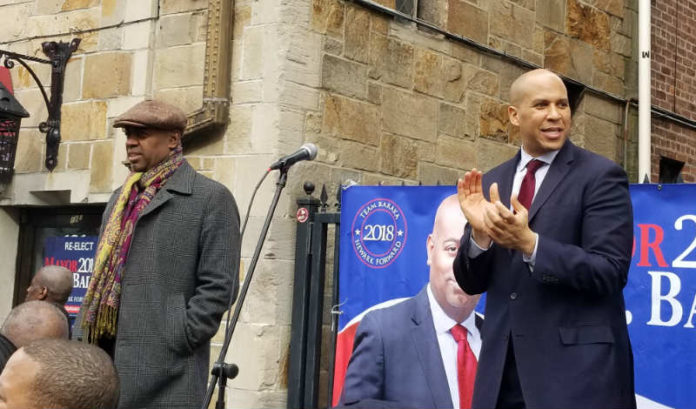 Cory Booker enjoys being a U.S. senator from the state of New Jersey.

He just might enjoy representing the city of Newark a little more.

Moments after joining the stage in a campaign-style rally to support Newark Mayor Ras Baraka’s bid for re-election, Booker reflected on the joy he felt to represent the city as its mayor from 2006-13.

That pride, he said, was never greater than when Newark was announced as one of 20 finalists for the right to be selected to house Amazon’s second headquarters.

Booker said people in Washington, D.C., were finally seeing how much Newark has changed.

“It was a great moment,” he said. “That didn’t happen by accident.

“It was just really good to see Newark in the mix.”

Booker said he feels Newark’s rise may just be beginning.

“Newark is going to show the world that urban places are places where the American Dream thrives,” he said. “In many ways, I take some kind of sweetness in how much people disrespected, disregarded and just dissed our city. Now we’re showing (who we are).

“This mayor is doing an incredible job. On every measurable index, you are seeing gains under his leadership. I’m just encouraged that this is continuing.”

While Newark is only being considered by Amazon, it already was the choice of Mars Wrigley Confectionery U.S., which announced it was moving its headquarters to the city in December.

“Now you see that we’re a city of choice now for corporations,” Booker said. “We’re going to continue to shock people until they get it.”

“I still see it where people come to NJPAC or the (Prudential Center) and they haven’t been here in years and they’re like, ‘Oh, my God,’” he said. “This is one of those times when America is going to rediscover one of America’s great cities.

“Remember, in the 1940s, the city was on the front page of Harper’s Magazine as one of the most livable cities in America. It’s history is like that. People are going to rediscover the truth of our city.”

Baraka to be roasted at NJPAC on June 25 (Here’s ticket...