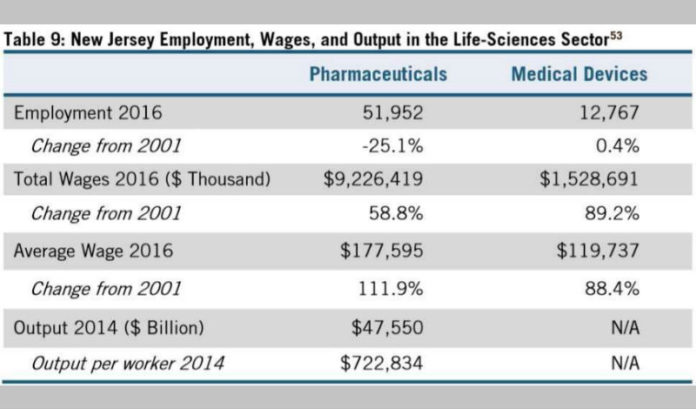 New Jersey’s biotechnology, life sciences and medical device sectors remain strong despite losses over the past decade, according to a new report by the Information Technology and Innovation Foundation.

The report, released Monday, highlights how New Jersey compares when stacked against some of its competitors, including Colorado, Indiana, North Carolina and Washington, and how the state governments are involved in boosting growth.

“America’s pharmaceutical, biotech and medical-device subsectors play an outsized role in the national and state economies, and they provide a significant number of above-average-wage jobs,” said ITIF senior fellow Joe Kennedy, author of the report. “However, these companies are attracted to and grow in locations that can combine qualities like a good business environment, skilled workers, strong research universities and available capital. Strengthening these and related factors can give states a stronger competitive advantage.”

New Jersey received some praise for its concentration of companies, and the number of patents these companies and other research entities obtain.

New Jersey also led the pack in the number of startups in pharmaceuticals, medical devices and research and development services — which account for at least 30 percent of the state’s startups, according to the report.

The industry has historically bemoaned a lack of funding and state support in this sector, which has led to the state Economic Development Authority’s investor credit, and Gov. Phil Murphy addressing the topic during his campaign last year.

Gov. Chris Christie signed off on a biotechnology task force in 2016, which has recently become active, and the state Assembly launched a committee this year dedicated to science, technology and innovation.

But the report also highlighted many of the known competitive disadvantages New Jersey has, from high wages as a result of the high cost of living, to low exportation to other countries.

“Wages in New Jersey are significantly higher, and have been growing at a much faster rate, than in other states, and may be at least partially responsible for its decline in employment in the sector, as firms choose to grow in lower-wage, yet high-skilled, locations,” the report said.

The report also showed New Jersey shipped $555 million worth of medicine in 2016, an 11 percent increase from 2013. Despite medical exports being the state’s sixth-leading export, the numbers don’t compare with Indiana and North Carolina, which are exporting in the billions.

The report did not compare the state to two competitors that the state’s pharmaceutical trade groups often identify — California and Massachusetts — except for in the summary.

“New Jersey has by far the largest life sciences industry among the five states reviewed in this report, according to the report: “It is also home to two of the world’s Top 25 medical-device companies and three of the Top 25 pharmaceutical companies. Although New Jersey is second only to California in both pharmaceutical employment and output, state and industry officials have frequently expressed concerns about competition from other jurisdictions.”

The report touts the efforts of the state and the EDA as well, highlighting Rutgers University’s role.

“For example, in 2016, (the EDA) helped fund a start-up called Visikol, which was trying to develop a safer-clearing optical agent for biology labs. EDA provided discounted lab and office space at its Commercialization Center for Innovative Technologies. CCIT is located between two major research universities and provides 46,000 square feet and 27 wet labs to nearly two dozen companies. It also provides companies with educational programs and support resources, including networking opportunities, administrative support, and assistance finding funding,” according to the report.

(READ MORE from ROI-NJ on Visikol and its work in biotechnology.)

The role that the state has played in the sector serves as a role model, according to the report’s author.

“If states want to lead in life sciences, it isn’t sufficient to leave the sector’s fate to markets alone. Governments play an important supporting role in helping to support the factors that influence the sector’s success,” Kennedy said.