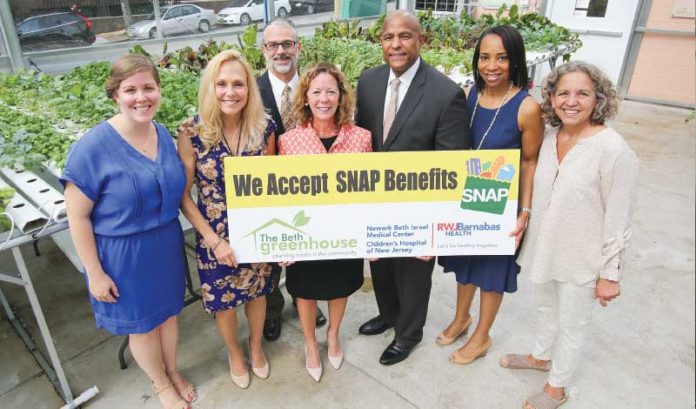 Food insecurity — or the lack of availability of healthy food choices — is becoming a growing concern of those in the health care sector, particularly health systems that operate in some of the state’s well-known food deserts.

For health care officials, food insecurity is part of a greater focus on social determinants of health care, including housing, food, violence and other environmental factors that exacerbate a person’s health risks and issues.

Virtua Health and RWJBarnabas Health have introduced programs to address the issue in the areas around Newark and Camden.

How’s this for a mobile farmers market?

Virtua Health launched a food truck last May in an effort to get better food to those in Burlington and Camden counties.

Suzanne Ghee, Virtua’s assistant vice president of business growth and community health engagement, said it has been a big success.

Ghee said that means nearly 30,000 pounds of fresh fruits and vegetables have been distributed to families in the two South Jersey counties.

“We’ve had for years community outreach programs, but the idea to launch a mobile farmers market came to be about two years ago,” she said. “(It) was about addressing an identified need of food insecurity and uptick in chronic disease.

“The idea was to treat the community before we see them in the ER, but also provide access.”

Ghee said the success relies on a confluence of data, a thoughtful strategy and a willingness to invest by Virtua’s senior leadership, including former CEO Richard Miller.

And, she said, it isn’t a program geared toward raising revenue.

Virtua is operating this at a weekly loss, despite putting a price tag on the fresh produce, Ghee said.

The health system bought the truck, outfitted it for transporting the bags of fruits and vegetables, and buys the produce from Whole Foods — delivered weekly — at a wholesale price.

Virtua is also paying for the salary of the two drivers (hired locally), a supervisor who is a Rutgers University graduate, and a full-time coordinator from Camden.

In addition, Virtua has invested in Ghee and her team, which includes a dietitian who travels on the truck for one-on-one counseling with individuals.

Ghee said the goal is to address two problems: lack of access to food and the chronic conditions that arise from unhealthy eating habits as a result.

“This is a unique approach to address social determinants of health and reduce health risks,” she said.

Ghee said that the health system has coordinated with local community groups in order to raise awareness about the truck and help find those who need access to it most.

Virtua, she said, targets high-risk populations, based on its data of where patients are coming from, and includes those covered by Medicaid.

Knowing that cost is often a barrier, Virtua has minimally priced the produce.

That’s a discount of 40 to 50 percent off what Virtua is paying for the food, Ghee said.

RWJBarnabas Health is trying to raise greater awareness about the problem of food insecurity with the production of a documentary, “Food for Thought: The Path to Food Security in Newark, NJ.”

The documentary was a project taken on by young residents, ages 12-21, in partnership with the Greater Newark Community Advisory Board as well as Newark Beth Israel Medical Center and the Children’s Hospital of New Jersey.

Members of the Greater Newark Community Advisory Board were featured in the film.

The film will be used to facilitate community-wide conversations in all five wards of the city, focusing on the prevalence of food insecurity and the links between food and health.

Newark Beth Israel CEO and President Darrell Terry, a Newark native, said the project will create awareness of a problem that does not get enough news coverage.

“Newark is a food desert, and food insecurity that kids and others have is important to their overall health and well-being and their ability to be productive citizens,” he said. “Working with our partners, we can address some of these issues.”

Terry said the film goes to the mission of the organization.

“We are so much more than just a hospital,” he said. “We are an anchor institution, and it is our obligation to improve the health status of the communities we serve.”

RWJBarnabas Health CEO Barry Ostrowsky said the health system was able to support the effort because of its size.

“When you are big, you have economies of scale, it helps you create a margin,” he said. “Whatever that margin is needs to be reinvested in our mission.

“We don’t have shareholders, so the question is, how do you reinvest that margin? You buy CAT scanners, you buy ultrasound machines, you put up new buildings. And we said that margin has to be spent differently.”

Davis said the film is an example of the health system hearing the needs of its community.

“I would truly feel good if the members (who view the film) see their fingerprint in this production,” she said. “The only reason why this is worth it is because we took the cue from the Greater Newark Advisory Board, who said we need to do this.

RWJBarnabas Health has long been active in Newark. It opened an urban farm and hydroponic greenhouse in 2016.

Officials feel the documentary will become a lens through which youth can share their view of the issue.

Davis said the onus is on the hospitals to create different avenues of care, including addressing issues like food.

“We don’t want to be obtuse or hypocritical,” she said. “We want to stop acting like the studies that reveal this are just sort of isolated and sit on shelves or in medical journals, and then we go about the business of just delivering clinical care in a clinical care setting. We get (that) we will not have a healthier community if we do not, in fact, have easy, affordable access to nutritious food.”

AtlantiCare gets $2M grant to develop a violence intervention program