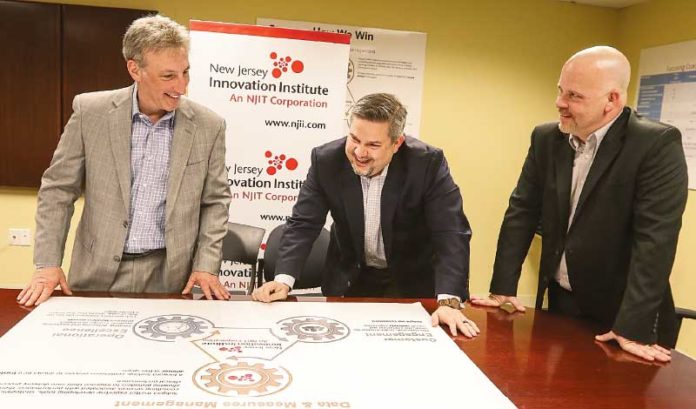 The metaphor Tom Gregorio used for the health care information flowing through the state was plumbing. It’s a massive, underground network that’s always being expanded on. And it’s vitally important.

It’s just lacking some of the fixtures — the hot-or-cold knobs to twist — that might make it more meaningful for everyday use.

But Gregorio, senior executive director of healthcare systems innovation at the New Jersey Innovation Institute, said there’s a project in his organization’s pipeline that may help address that.

Because these entities may have different systems for storing health records, Jim Cavanagh, executive director of the network, said simply trading health information between health care institutions has not been as easy as it sounds.

“There has long been a need to share information and get them out of silos in hospitals, physicians’ offices or long-term care facilities,” Cavanagh said. “Interoperability is a big issue right now with government in health care reform. It drives the ability to do population health management, as well as reducing health care costs and making it more efficient, too.”

NJII is in the market of responding to what policymakers are asking for in the health care arena, which was the impetus for this project several years back. Cavanagh said governmental entities have allowed for the creation of islands of patient care information — and have realized the need for bridges between them after the fact.

It was for various reasons that the organization was recognized as having the ability to achieve this in concert with the New Jersey Department of Health.

“It’s our combination of health care knowledge — the organization is really made up of people well versed in health care policy, because we’ve been executives in hospitals and health care systems for many years — but also understanding technology and putting a focus on innovation and new ways of doing things,” Cavanagh said.

It is worth mentioning, however, that the New Jersey Health Information Network program, which is being rolled out first in the Newark metro region and is being expanded out from there, is not entirely unique.

“What we’re implementing in New Jersey is actually based on a model that was successful in Michigan,” said John Novak, senior director for government technology and architecture at NJII.

Many states are looking at establishing similar systems that could all link up to a national information exchange.

“Every state has something different in their scope, the interoperability they’ve been able to achieve and, frankly, the money they’ve spent on it,” Cavanagh said.

The amount of data that even just the Garden State’s health care industry manages is massive. So, those undertaking efforts to streamline that information also have to keep an eye on costs.

NJII’s leaders, in talking with the many organizations that comprise the health care industry in the state, said questions about costs have often come up regarding the pilot data platform.

“We’ve been talking to anyone and everyone about this; we want feedback from as many folks as we can,” Cavanagh said. “And some of the feedback has been around familiar barriers to interoperability, such as cost.”

One way that NJII’s leaders and its state health department partners are hoping to remain cost-efficient with their initiative is the attention they’re paying to existing health information exchanges already serving certain geographic areas of the state.

“We’re trying to avoid redundancies with those exchanges and making sure we’re not reinvesting needlessly in places where money was already spent,” Cavanagh said. “We don’t want to duplicate efforts of other organizations. Instead, we want to get them to communicate with each other. So, we’re really building on those foundations and not redoing them.”

There are important reasons to get it right. Gregorio said the health information system they’re envisioning has a role to play in confronting the nation’s opioid epidemic.

“This is something we’ve presented at the state level; even the previous administration got to see it,” he said. “We think there’s an opportunity here; we believe it can make an impact on this serious problem.”

That impact comes from getting the right information in front of physicians, as Cavanagh explained.

“Some of the ideas we’re working on now include an opioid risk factor measurement that pulls the right information from different parts of the health care continuum,” he said. “If a patient shows up in an emergency department, we may be able to raise a flag to a provider while the patient is there.”

Too often in the practice of health care, Cavanagh said, health care professionals are piecing together reports from the past in a way that allows them to be reactive — not necessarily proactive.

That’s not the case for today’s technology.

“We now go onto Amazon, it already knows our buying patterns — with Google talking to it about what we’re searching and looking to buy,” Cavanagh said. “Technology needs to be in real-time. That’s how we should look to impact technology in this industry, too.”

Speaking of that e-commerce behemoth: Gregorio said the network NJII is participating in the creation of could even have implications for the new health care company that Amazon, Berkshire Hathaway and JPMorgan Chase announced last month they were launching.

The corporations are expecting to bring innovations to the health care industry with this venture; NJII expects its health information solution to be seen as just that sort of innovation.

“When you think about that announcement … the need for information they’re going to have, to solve some of the problems they put out there to solve — that’s exciting to us,” Gregorio said. “We can help identity some of the issues they’ll looking to take on.”

But the data platform isn’t being made only to meet the future demands of the industry.

“We’ve got our finger on the pulse of gigantic changes coming in health care, but, also, we’re well aware of historic problems that still need addressing,” Cavanagh said. “That could be things as simple as matching patient identity and making sure we get that right.”

The platform is one NJII leaders consider potentially a model for other projects. As the program develops, Cavanagh said the organization is more than willing to share what works in New Jersey with other states developing a network that links smaller health information networks.

“Because what we’re ultimately interested in is bringing better solutions in health care to the country,” he said.

Details on the network

Here’s what the New Jersey Department of Health plans for the shared platform the state is working on with New Jersey Innovation Institute, according to its website:

Drug industry has ideas for improving transparency. But will they lower...