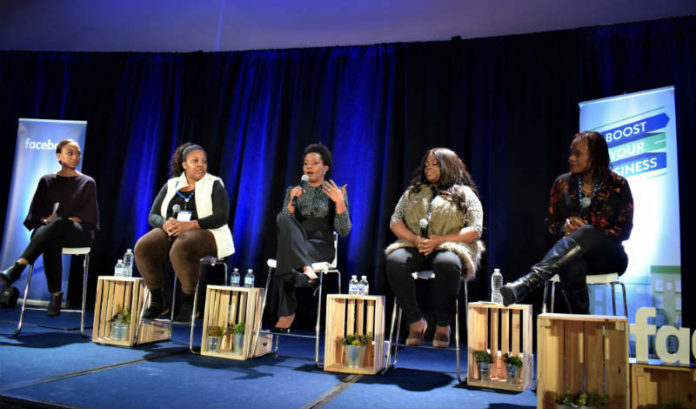 “Rihanna just wore my hair to the Grammys.”

Petal Levy never thought when she started her own wig company in 2011 that she would one day say those words to a room full of entrepreneurs.

Her business, Hair So Fab, now has three stores, in Newark, Orange and Brooklyn.

Levy was one of four African-American women small business owners on a panel discussing the role of social media (specifically Facebook and Instagram) in boosting her business.

She addressed a crowd of more than 100 at the Robert Treat Hotel on Tuesday, as part of a two-day Boost Your Business event that took place in Trenton and Newark. U.S. Rep. Donald Payne (D-10th Dist.) was among those attending the event.

The event is part of a national effort by Facebook and the National Black Chamber of Commerce during Black History Month.

Business leaders in the African-American community say that, in the entrepreneurial sector, the community has been responsible for stunting the growth of new businesses.

“Facebook and Instagram (are) why I’m in business today,” Levy said. “A lot of the times in our community, we don’t support each other. How else are we going to get our business out there?”

John Harmon, president of the African American Chamber of Commerce of New Jersey and a past chair of the national chamber, has discussed the issue for years.

The African-American community is no stranger to the power of social media. Case in point: Black Lives Matter.

But it has not fully realized the power of social platforms for business.

“We use it for socializing, but we don’t use for monetizing,” Harmon said.

“If you’re in business, you have to get on these platforms,” Levy said. “You cannot do it just by handing out flyers anymore. This is the fastest way to grow your business. Get on Facebook, get on Instagram and boost your post. Even with $5 or $10, that’s all you need. You don’t need $100. You don’t need $1,000. When I started my business, I had less than $1,000 in the bank.”

Sharing the stage with her were Ozi Okaro, owner of Ikuzi Dolls, Nicole Josey, owner of Leilo’s Sweet Shop, and Martine Cadet, owner of Kaderique.

Cadet stressed that the newest trend in social media focused on quality, not quantity. Recent reports nationally have criticized accounts that purchased followers.

“Don’t buy followers,” Cadet said. “It will kill your business.”

The U.S. Chamber of Commerce published a survey last month about the use of digital platforms in business, in coordination with Morning Consult and Facebook.

The survey concluded that women and minorities are more likely to say that Facebook has been a key to their success.

The sentiment was echoed by the panel Tuesday.

“There is not one business that can survive without some sort of social media presence today,” Josey said. “It is so essential to your business in 2018.”