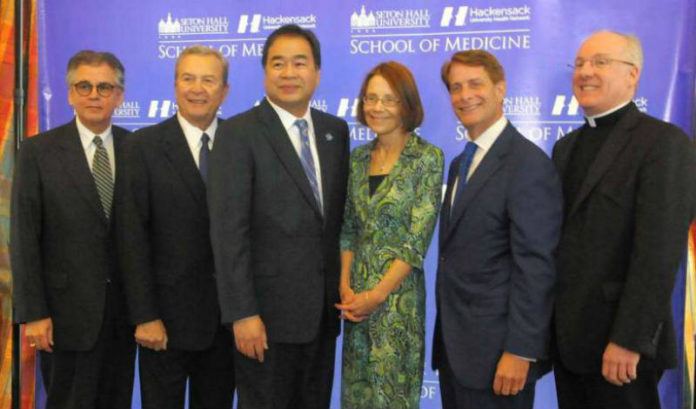 The school received its accreditation late Wednesday night from the Liaison Committee on Medical Education, ROI-NJ has learned.

It’s the latest step, and one of the most important ones, for the school, which will be the first private medical school in the state.

The source requested anonymity because they are not authorized to comment on the school.

“We are thrilled that the Seton Hall-Hackensack Meridian School of Medicine has received preliminary accreditation from the Liaison Committee on Medical Education,” Hackensack Meridian said in a statement Thursday morning. “This is a remarkable achievement, and we are thrilled that our vision for a new approach to medical education is becoming a reality. Dynamic changes in health care require us to rethink the education of future doctors. We are creating a rigorous academic curriculum that combines traditional science with a focus on the new frontiers in medicine: prevention and population health, genetics and team-based care delivery in communities. This holistic approach truly helps us forge a new path and the future of health care depends on such innovative solutions.”

The school will be housed on the old Roche site, which straddles Nutley and Clifton along Route 3.

It recently received the OK from the Nutley Planning Board for site plans, and both Hackensack Meridian Health and Seton Hall have been building up faculty and staff and the curriculum in the past year.

“We are pleased to receive preliminary accreditation for the Seton Hall-Hackensack Meridian School of Medicine from the Liaison Committee on Medical Education,” Seton Hall said in a statement. “This is an essential requirement and great accomplishment in the complex process of establishing a new medical school. We continue to work with our partner, Hackensack Meridian Health, to address the next steps in this exciting project as it moves forward, including at the appropriate time, an announcement regarding our inaugural class recruitment.”

The two entities announced the venture, the first of its kind in the state between a health system and private college, in 2016 after signing a 25-year lease for the 116-acre former pharmaceutical site in Nutley and Clifton.

Of that, 16 acres will become the new school, including Seton Hall’s College of Nursing and School of Health and Medical Sciences. It is also slated to be the home for research and innovation.

Since then, Seton Hall lost its president, A. Gabriel Esteban, to Chicago-based DePaul University.

But the dual-entity venture has gained Dr. Bonita Stanton as the founding dean of the school. Stanton has had a prominent career consulting with the World Bank, the federal Centers for Disease Control and Prevention and the World Health Organization.

The school has said it is building its curriculum to encourage greater interaction within the health system and focusing on the latest technologies and strategies of providing health care.

“Basic science content will be presented in its clinical context with clear medical relevance. Students will learn within an integrated curriculum in a team-oriented, collaborative environment,” according to the school’s website.

In the past, Robert Garrett, the co-CEO of Hackensack Meridian Health, has stated he hopes the school will help alleviate what is expected to be a coming shortage of primary care physicians in the state.

In 2020, the state is projected to have a shortage of 2,500 primary care physicians and specialists.

Garrett is so passionate about the project that he and his wife, Laura Garrett, provided a $2.65 million gift to endow a chair for Stanton.

N.J. lands in nation’s Top 10 for highest student debt, according...