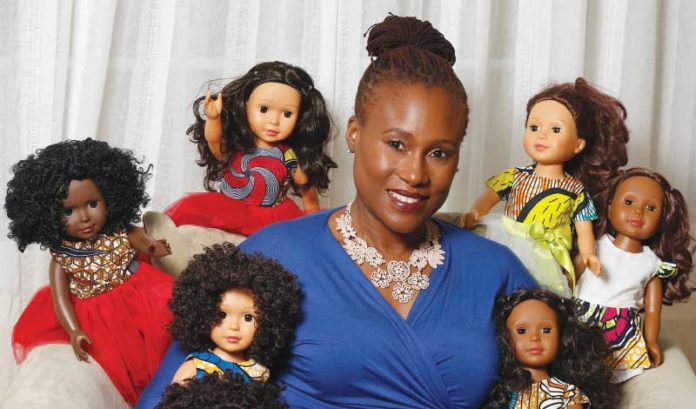 Ozi Okaro has known insecurity, self-doubt and a sense of not belonging.

It was children’s dolls that taught her those feelings.

And she wasn’t the only one who had those emotions.

“If you talk to women of color, you find that the dolls we grew up with really affected your perspective of what’s beautiful,” Okaro said. “It was further reinforcement of the images you’re bombarded with on an everyday basis in advertising and everywhere else.”

Okaro is in the business of changing that.

She’s the founder of Ikuzi Dolls, a line of dolls that is sensitive to diversity and the many different ways a little girl can look. It’s a big mission she’s taking on at her small startup and the Montclair resident is running the business by herself.

But Okaro would be remiss not to mention that her children have helped in areas such as prototyping. It only makes sense for them to get credit, too — given that it was the mother of four’s experience of shopping for her daughters’ dolls that inspired her to start the company.

“It was more than a little frustrating; we could only ever find dolls with one shade of brown,” she said. “One of my daughters has dark brown skin and the other has light brown skin. I couldn’t find dolls for each of them individually.”

Okaro said the online-only Ikuzi Dolls taps into a market that until recently has been overlooked: girls’ dolls that represent various skin tones and ethnicities.

Okaro is an unlikely candidate for an entrepreneur in the toy industry. She’s a computer science whiz who was employed as a systems analyst for the majority of her career. After leaving the tech world and taking some time off to raise her children, she wanted something creative and ultimately more fulfilling when she re-entered the workforce.

It’s a path she started down by studying marketing at the Columbia Business School in New York. From there, she would work at Giorgio Armani and Victoria’s Secret. Then — definitely relevant to her current venture — she took a position as manager of global e-commerce for Wayne-based Toys R Us.

When she went to launch her own company with all that experience to call on, she did it with crowdfunding through Kickstarter.

But it fell flat.

“I was going in a little blind,” Okaro said. “Afterwards, I realized you have to build up a following and really get people rooting for you. I didn’t have that yet.”

She also was — and still is — up against some of the industry heavy-hitters in the toy category, corporations that have wised up to the need for an e-commerce presence and a more diverse line of products.

“There are so many toys and many different categories and some of the big brands are doing everything,” she said. “But, I think we still have something that’s meeting a need.”

So, she had her niche. Then she had a big break, too.

Like a bolt from the blue, she got a call one day from an editor for O, The Oprah Magazine, which had been searching online for dolls featuring girls of color and stumbled across Ikuzi Dolls.

The only problem is that the big-name publication needed 100 dolls ready in two days for a photo shoot. It was hectic, but more than worth it.

“Getting out there like this is allowing me to grow with what little financing I’ve been able to put into it,” she said. “I only really started this about two and a half years ago, so I’ve been blessed to have that exposure this early in the game.”

Okaro is still very much in a preliminary stage with her startup. She’s eager to get Ikuzi Dolls’ name out there — counting every new social media comment, like or share as a success.

But, she has a larger vision for her company, one that she feels will connect with a movement playing out in the larger African-American community.

“There’s an increasing awareness of the need to celebrate ourselves — embracing natural hair, our skin tone and more,” she said. “That’s hopefully something we can ride as a business. But, on a social level, it’s so important for little black boys and girls to be proud of who they are, not ashamed of it.”

She believes there’s just as much to be said for the potential to make an early impact on youth outside the African-American community.

“It’s just as important as well that girls have dolls featuring people of other races to engage with in a positive way,” she said. “Those experiences at a young age really enhance their appreciation and acceptance of diversity. I think (these dolls) can make a difference.”