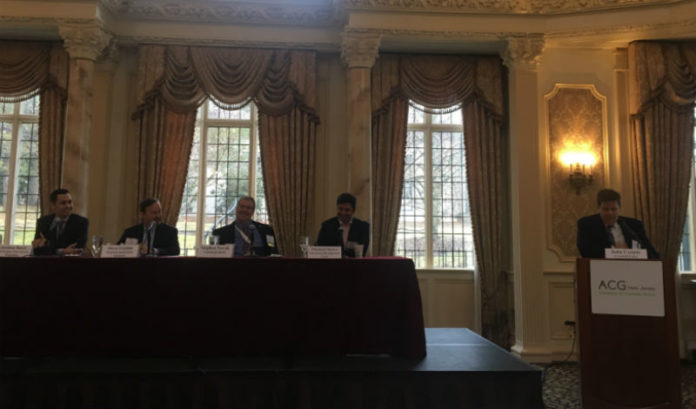 There are no ifs, ands or buts about it, Michael Seeve, president of Mountain Development Corp., said: Technology today is affecting every aspect of the way people live and work.

“This has resulted in all companies empirically needing less space,” Seeve said. “But, by the same token, it has created a situation in which a lot of firms are finding themselves unable to productively work in their old spaces, forcing them back into the market to see what else is out there.”

Welcome to the real estate market of today, where the driving forces behind the industry are based on the necessities and innovations of tomorrow.

More than 75 prospective and current members of the New Jersey chapter of the Association for Corporate Growth attended the panel, “The State of Real Estate in New Jersey,” at the organization’s monthly breakfast meeting on Tuesday, held at the Pleasantdale Chateau in West Orange.

Moderated by John Cromie, partner at Connell Foley, the panelists discussed their recent experiences within the industry and, also, their predictions of things soon to come.

“Our experience is that the suburbs continue to be a great market, as corporate leaders who have moved out to the suburbs to raise their families are the people making most of the real estate decisions,” Seeve said. “However, while having buildings next to where we live and work is a formula that always has worked, we think that the days of owning suburban real estate and simply collecting rent on auto pilot is no longer such a viable option.

“Buyers and owners now have to be proactive about continually finding new ways to make spaces relevant for companies.”

“Property owners themselves are building shared office spaces,” he said. “They may be bringing in their own talent and technology without necessarily using companies like WeWork, but they certainly are creating small, individual offices within their existing spaces.”

Other property owners, said Josh Burd, editor of Real Estate NJ magazine, are beginning to capitalize on the shared economy.

“We see more suburban office buildings and commercial landlords partnering with companies such as Uber to offer that amenity to their tenants — for those who may not want to drive but also are trying to find that middle ground between suburban living and being in a building atop a train station where rents are considerably different,” Burd said. “We also have seen companies such as Airbnb work its way into residential buildings as developers look to differentiate themselves from their competition across the street.”

However, the two biggest drivers for residential real estate in New Jersey, Steven Goldin, principal of Expense Reduction Analysts, said, will no doubt be the increased need for affordable housing and the introduction of driverless cars.

(READ MORE from ROI-NJ on the ACG NJ meeting.)

“There are, for example, many cases pending in courts right now telling towns they must have a certain number of affordable housing units,” Goldin said. “As those decisions comes down, towns will have two choices: raises taxes and build the units themselves, which is politically unfeasible, or go to private developers and say, ‘We need you to come here and develop housing to fulfill our obligation.’ Developers may then get to build (five times the amount of required) units if 20 percent of them are ‘affordable.’”

Technology, Goldin added, will then begin to change real estate development — and prices — around the country more than anything else.

“While people may be skeptical of driverless cars now, as they phase in, insurance companies will see that the accident rates are dramatically lower,” he said. “Your car insurance, if you choose to drive, may then go from $2,000 to $5,000 per year for one vehicle. That will cause a mass shift toward driverless vehicles. And, as that happens, we won’t need as many parking spaces at train stations, shopping centers, office buildings — most people will probably just have one vehicle in their driveway because their other ‘vehicle’ will be T.A.S.S. — transportation as a service.

“Also, if tenants get rid of one car, that is about $800 per month to instead put toward a mortgage, meaning that the prices of homes adjacent to train stations and office buildings, for example, can be higher.”