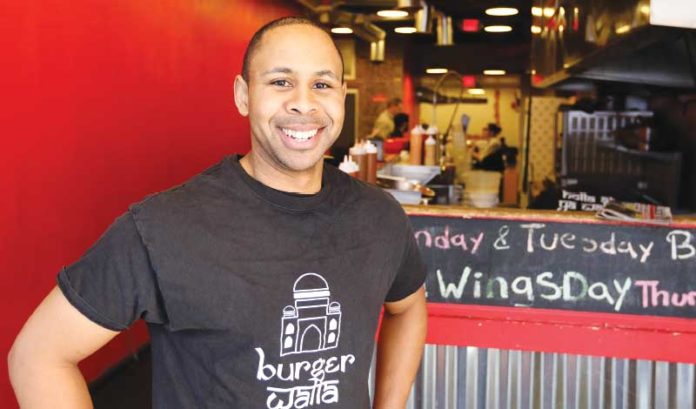 As a third-generation Newark resident, it only makes sense that Kai Campbell’s own story personifies the city’s diversity.

The African-American business owner — and economic development mastermind who worked under former Mayors Sharpe James and Cory Booker — runs an India-inspired burger restaurant with his wife, Tamara Remedios, who has Indian heritage.

And even if it sounds as unlikely as a former financial analyst starting a burger joint, he does have a history to call on in the food business: His grandfather, who left the South during the height of segregation, spent most his local career as a kosher chef.

“I tell people all the time that my mother kept a kosher kitchen at home; I didn’t realize all of that stopped after I tasted Spam and a pork chop,” Campbell said.

Campbell was taught early on that having knife skills was a sure way to land a job anywhere, even if it meant cutting onions. That advice stuck with him.

But he was more interested in cutting deals before he started Burger Walla in 2014.

“My entire life, I wanted to do economic development work,” he said. “I was born and raised in Newark, and I wanted to give back to where I came from. And I was able to do that by leading analysis of mixed-use, retail and residential development in the city, as well as leading business attraction.”

Campbell did financial analysis for the city of Newark to determine how much money it would take to get large project deals done thorough public or private financing. Through that, and his work showing corporate representatives around the city, you can find his fingerprints hidden in every major project that has signaled the renaissance of Newark in the past decade or so, such as the Hotel Indigo, the Hahne & Co. building or the Prudential Center.

Doing this sort of outreach and getting franchise opportunities rejected by the nation’s burger chains ended up serving as inspiration for starting his own restaurant.

“All these franchises said, ‘Hell no, Newark is not our market,’” Campbell said. “They didn’t like distressed urban markets, which is basically the city’s demographics.”

There was no burger franchise in the city. And certainly none doing a mix of burgers and Indian cuisine in Newark — or many places elsewhere. Campbell saw opportunity.

“A straight-up Indian restaurant couldn’t work here, it’s too soon,” he said. “But, this is a good way to give people an introduction. Because, really, 10 years ago, before you had Chipotle, a lot of people looked at Mexican food and said, ‘Oh, no — that’ll upset my stomach.’ Well, people are learning what Indian food is actually about, too, and how great it is. It’s about more than spice.”

Campbell said most Indian food in the United States derives from a particular region of North India. The flavors on Burger Walla’s menu pull from coastal regions and the southern parts of India, as well.

Campbell grew up eating Indian food around the area his grandfather’s kosher restaurant was based — near Edison, which has a large Indian population. He’s very passionate about it.

“I believe it’s like Latin and the romance languages, it’s the mother tongue for all these different cuisines,” he said.

His launch of an Indian fusion restaurant also has to be credited to his wife, Remedios, who has similarly established herself in Newark’s business community. Among other endeavors, she started the local business and restaurant news site Newark Pulse and helped the city put together its first Restaurant Week.

The duo has a plan for expanding their Burger Walla business in a way that is reactive to the e-commerce trend — getting sauces they use bottled for high-margin online sales.

“It’s a trend I want to follow,” Campbell said. “Also, I come from the world of financial analysis; I don’t want to be the restaurant owner who dies on the grill at 80.”

For the time being, Campbell is busy proving Burger Walla’s concept. He’s glad to be doing something unique, but also representative of the city he loves.

Going his own way

There’s an art to economic development. And creative differences, too.

Kai Campbell had a different view of development and how it should take shape in Newark — one that emphasized smaller-end businesses. It led to a split with some of the city’s leadership.

“People just aren’t interested in the smaller stuff,” he said. “It’s not as sexy; it’s not a $20 million project. But you actually make more money on smaller projects. And that’s where markets take shape.”

Campbell stopped doing financial analysis and business attraction solely for Newark and started a consulting company to do it for other municipalities.

Needless to say, he still pays a lot of attention to the course Newark’s development is taking. And his opinions are strong as ever.

“What I think people need to understand about Newark is that it’s a deceivingly small town,” he said. “I just think we should frame what we’re doing as a small city doing big-city stuff; that’s more of a win. Otherwise, we’ll be setting goals that aren’t achievable.”