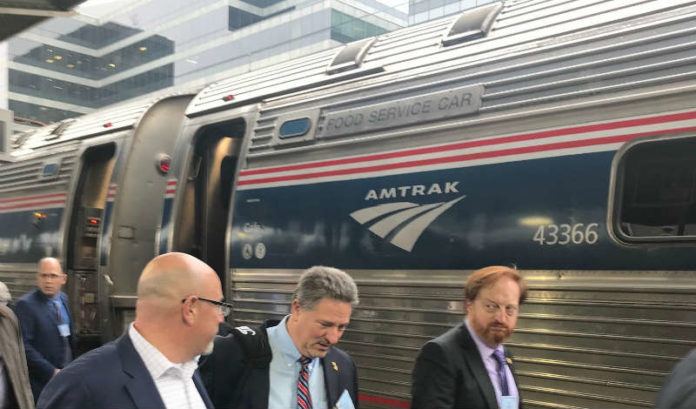 Some of the top political scientists and pollsters in the state were on the New Jersey Chamber of Commerce’s annual Walk to Washington train on Thursday.

We didn’t consult with them.

Our polls — four questions we asked 25 people — were based in as much science as a note you may have passed in grade school. We had questions and we asked people who looked like they wanted to answer them.

That being said, we do think they provide a bit of a snapshot into the mood of the New Jersey business community.

Particularly our question on what should be the top priority. Gov. Phil Murphy has talked extensively about rebuilding our transportation systems — and the riders agreed in overwhelming fashion.

A look at our four questions and the results:

How would you rate Gov. Murphy’s performance for his first 44 days in office?

Comment: The governor received four perfect 10s and only one answer (a 3) under 4.

How would you rate the state as a place to do business?

If the governor could only concentrate on one size business: Startups, small, medium or large, which one would you tell him is the most important?

Comment: Followed by startups and medium (both 28 percent) and large (just 4 percent).

Winner: Transportation and logistics (an incredible 96 percent of those surveyed), followed by taxes (64 percent).

Comment: Everything else was much lower: education (16 percent), economic development/incentives and outmigration/millennials (12 percent), and diversity and inclusion (4 percent).

Phil Murphy’s slate of events leading up to inauguration