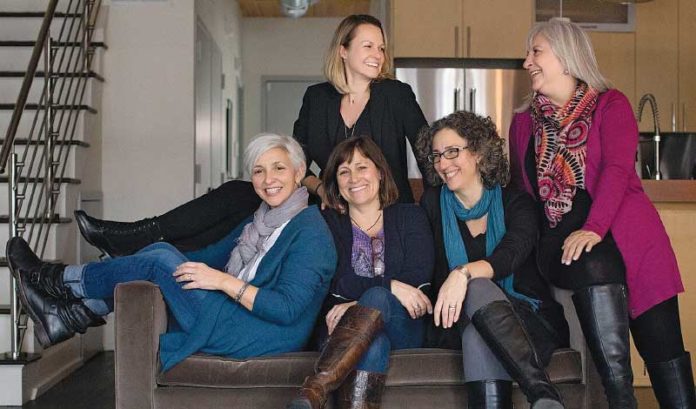 Maria Vecchione said the experience is different for every person she sits across the kitchen table from.

“Everyone has a story as to why they are buying or selling a home that we must tap into,” she said. “It must become as important to us, as it already is important to them.”

For Vecchione and her four colleagues — Susan Horowitz, Irina Grobman, Robin Seidon and Leslie Kunkin — that ideal became “everything” the moment they collectively stepped away from their careers at Keller Williams Realty earlier this year and into the roles of founding partners at West of Hudson Realty Group, or WOHud, in Upper Montclair.

“When we looked at Montclair and its surrounding areas, what seemed to be missing from the market, especially in such a unique place to live, was that truly locally-focused agency,” Vecchione said. “Those all had gotten eaten up by corporate, even though that is what people want today.”

As a women-owned, “concierge-like” residential real estate agency, West of Hudson Realty Group, Vecchione said, intends to bring back into the industry that level of personalized local service.

Now, just a couple of months in, the women already have grown the business to 12 veteran agents and an office manager, with a collective sales record of more than $137 million over the past two years.

“We thought that this might be the right time to reintroduce the ‘concierge’ concept,” Vecchione said. “Small business is thriving here, because it is not only important to us as individuals to support, but also as a community.”

Montclair, however, was not the first community the partners were a part of together.

Vecchione turned to real estate in 2000 after working in film and television for more than a decade, most notably as a production manager for NBC News and a producer for Lifetime Television.

“Maria and I had worked together many years ago, and, when she and her husband moved to New Jersey, we stayed in touch,” Seidon said. “So, when I was looking to get out of television, real estate was the thing that made the most sense.

“I could go to school for two weeks and get a license. It didn’t require a tremendous amount of money to start up. And it was something that I knew what you put into it is what you get out of it. All of that was really attractive to me.”

Per Vecchione’s suggestion, Seidon obtained and began practicing with her real estate license in 2002.

Horowitz and Grobman also had worked together at some point during both of their nearly 20-year careers in television. Horowitz worked as a television producer and development executive for companies such as NorthSouth Productions and networks such as VH1 before she turned to real estate in 2010. Grobman, a television producer for networks such as VH1, MTV and production companies such as True Entertainment, only turned to real estate in 2014, after having conducted her own search for a home.

Kunkin, however, had never worked in film or television. She left her legal career at Wilson Elser in Manhattan after six years to focus on family.

“I then sort of just fell into real estate in 2008 and decided it was the best move I could ever make,” she said. “I became active in the community. All of us, really simply, decided to become ambassadors of the towns we live and work in.”

“We are building real, lasting relationships, whether it’s providing information about the local schools, to identifying the right contractor for renovations, or knowing the perfect spot for a weekend brunch,” Vecchione said. “We are there for our clients from Day One, continuing long after closing.”

That scale of service is certainly not what most people think of when they think of Realtors, Horowitz said.

“Then, we may stay with our clients from the minute we meet them until years later, when they call us and ask, ‘Hey, we’re thinking about putting an addition on our house —  or should we sell instead?’”

According to Seidon, West of Hudson Realty Group truly has nothing to sell.

“We simply facilitate the sale of commodities that someone else owns,” she said. “That process is frequently emotionally fraught and sometimes logistically difficult …”

“… But how you handle the situation and how it turns out can literally affect people’s lives,” Kunkin finished.

In addition to running the new business from a 1,500-square-foot office in Upper Montclair, each of the partners also is running her own real estate business in nearby towns in Essex County, including Glen Ridge, Bloomfield, Verona, West Orange, South Orange and Maplewood.

With each agent acting as an individual contractor, some agents complete 10 closings per year, while others complete 25.

“This business attracts people who want to have a life as well as a business,” Seidon said. “That’s a reason why a lot of us do this — we have more control over our time.”

For Kunkin, that means being able to pick her young kids up from school every day.

“Everybody runs their business differently, depending on their needs and circumstances,” she said. “We just want our agents to be as productive and happy as possible — and, since it seems there are more women in real estate, part of why the profession has evolved into such a flexible and inclusive one to begin with seems because women traditionally balanced family and work a bit more.”

At West of Hudson Realty Group, for example, there is just one man employed.

“That was not deliberate,” Vecchione said. “We do, also, want to hire about a half-dozen more agents for our current space.

“We are focused on growing thoughtfully and slowly, as it is not about volume for us.”

Kunkin said she has, however, received positive feedback from her clients.

“Several of them have told me how much they love that we are not doing what everyone else is doing,” she said. “They are excited about the idea that we are doing something consistent with what is important to this town and the towns surrounding it.”

The name helps, too, Horowitz added.

“Our name resonates with sellers, because it is a name that actually means something,” she said. “It speaks to the people who come here from the city.”

From television to real estate

According to Robin Seidon, partner of West of Hudson Realty Group in Upper Montclair, many people from the television industry now work in real estate.

“Like real estate, television is by and large a people business, too,” she said. “You also need to be organized and to know how to be able to get things done — for example, we knew how to set up a business because we had set up shows.”

Unlike television, Seidon added, real estate is not an age-driven business.

“When I got into the business at age 45, I was young for real estate at the time,” she said. “Now, we are seeing a lot more young people getting into the industry from the get-go, but women who commandeered the industry at that time were all in their 60s and 70s, which I found to be refreshing. You can do this work for as long as you want to. If I want to retire, I can, but if I don’t want to, I also can decide how much I want to work.”

While life as an independent contractor with low startup costs and minimal schooling required may be the job’s biggest selling points, Maria Vecchione, partner at West of Hudson Realty Group, said it is very different working for an individual with a story rather than for a network or corporation.

“As a producer who handled the budgets, I always was spending somebody else’s money,” Seidon said. “This typically is a very personal business.”