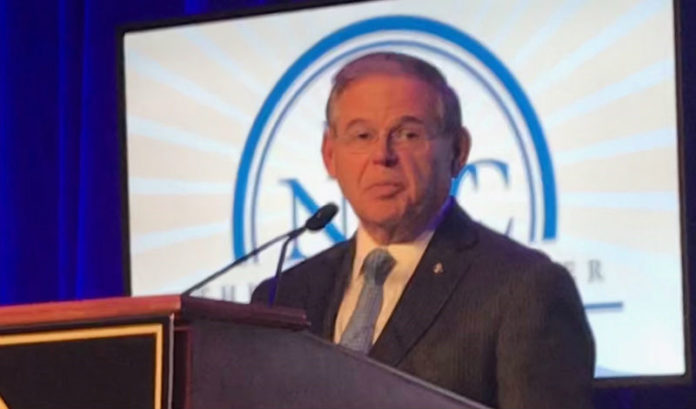 When the Georgia legislature responded to Delta Airlines’ announcement that it would no longer offer group discounts to NRA members by passing bills to strip Delta of its tax incentives, most saw it as ideological fight over the Second Amendment.

Gov. Phil Murphy saw it as an economic opportunity.

Last night, during the keynote address of the New Jersey Chamber of Commerce’s Walk to Washington Congressional Dinner, Murphy said his administration is “tracking down” Ed Bastion, the CEO of Delta Airlines, and pledged to have a meeting with him, presumably to attempt to lure Atlanta-based Delta to New Jersey.

How much chance Murphy has of luring Delta remains to be seen — and he wasn’t the only state that said it is reaching out.

But it did serve as an example of something Murphy said he does believe in: Growing the New Jersey economy because of its progressive policies — not necessarily in spite of them.

“You can’t put a number on a state’s values,” he said. “If you, or your business, or your coworkers, or your kids care about things like common sense gun safety laws, a 100 percent clean energy future, fully funded women’s health care, the welfare and rights of our LGBTQ brothers and sisters or enlightened policy that allow safe cities to flourish or other deeply held values that have historically defined New Jersey.

“We aim to be America’s gold standard.”

Being the gold standard could lead to a gold mine of growth, the theory goes.

“It’s not just about financial values, it’s also about human values,” Murphy said. “And we believe ours align perfectly with today’s corporate mindset.

“It is a tremendous weapon in our disposal for economic development, which we intend to aggressively deploy.”

The school shooting in Florida that left 17 dead, which sparked the action by Delta, was a hot topic at the state chamber banquet.

U.S. Sen. Robert Menendez (D-N.J.) offered an impassioned plea to the business leaders in the audience to help on the issue.

Menendez believes the business community has more power than it realizes.

“We won’t get anywhere if we keep letting the NRA set the agenda,” he said. “I know some of you may not think it’s relevant to you, but believe me, it is.”

Menendez said corporations in New Jersey need to step up.

“It’s time to call out those who espouse the same old talking points,” he said.

“Tonight, I ask you to think about positions of influence you hold as business leaders at the forefront of our economy, as opinion leaders in our society.

“Some of you manage tremendous assets in our financial services industry. I know, because I sit on the Senate Finance and Banking Committee. You have the power to choose where to invest. And maybe, just maybe, it’s time to make less investments to the gunmakers.”

Menendez said he was speaking to more than just those who work in the financial sector.

“The reality is, no matter what sector you work in, you wield enormous influence,” he said. “Think about the power that exists in this room tonight. You are innovators. You’re investors. You’re business owners and industry leaders.

“We need Corporate America with us. We need you to help the students of Parkland turn ‘once again’ into ‘never again.’”

Whether they will be moving to the hundreds in the audience remains to be seen.

Instead of infrastructure funding, Congress gives us political gridlock and delays

New Brunswick learned from Amazon bid, even in defeat

Election 2017: The 12 votes that could reshape N.J. this November