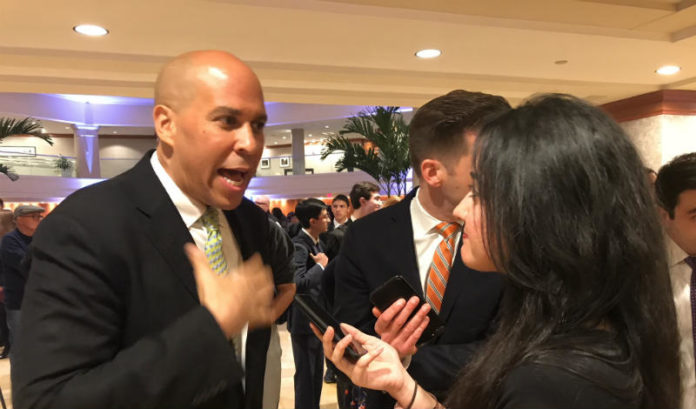 All that talk about how millennials are taking over? Apparently, that’s not the case in New Jersey.

And that’s not a good thing.

When U.S. Sen. Cory Booker (D-N.J.) addressed a crowd of a few hundred business and municipal leaders at the New Jersey Chamber of Commerce’s Walk to Washington Congressional Dinner on Thursday night, he gave data that showed New Jersey is leading the economic charge into the future in only one category: outmigration of millennials.

“(It’s) the biggest population bubble in American society all over the country, (but) in New Jersey, we are losing our millennials,” he said. “They are choosing not to stay in New Jersey. The are beginning to make us not the state of choice, but the state to leave.

“We’re seeing New Jersey as an exceptional state, but we are the No. 1 state in America with the highest level of millennials leaving. We are No. 1 in a category that we should not be No. 1 in.”

The long-term consequences to the business community could be grave, Booker said.

“New Jersey is missing out on the next generation of workers, of entrepreneurs, of innovators,” he said. “New Jersey is losing its hold on its best guarantee that we’ll have a great future.”

Booker said the millennial population has grown by 7 percent over the last 13 years in the country. In New Jersey, that same population has dropped by more than 3 percent.

Booker is not the first to sound the alarm.

Michele Siekerka and the New Jersey Business & Industry Association have been out in front of the issue for a while, and recently issued a white paper on the subject.

Booker said there are things the business community and elected officials can do to help.

“We know there are things we can collectively do to address that,” he said. “We know that, as a state, we can focus on making this a state of attraction, where we’re pulling in the best minds (and) the best future leaders by focusing on infrastructure, by focusing on small and midlevel businesses because those are critical for the younger generation.

“In fact, we know that, while we are losing our young, we are also losing a number of midsize businesses that are the biggest job creators in our country.”

Like the NJBIA has said, Booker stressed education as a key.

“We know that focusing on county college and innovation and technology training can help people choose to stay here and build jobs,” he said.

Booker said the situation cannot turn unless the business community works together.

“I call on my community tonight to not let this trend that has happened over the last decade continue,” he said. “For all of us to think about ways we can be working together to improve our state and ensure that we don’t be a state that loses our lifeblood, loses are grip on the future.

“Instead, (let’s) do what New Jersey has done for centuries. We have led this nation in innovation, entrepreneurship, the arts. We are America’s leaders and we’ve got to continue that.”