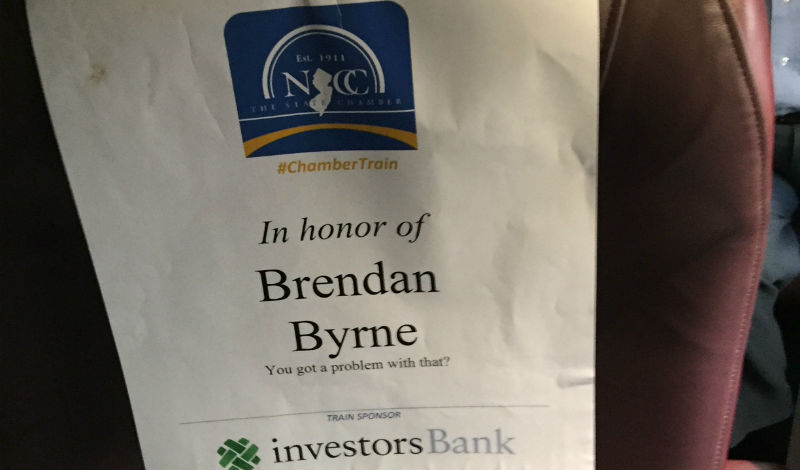 A seat on the Walk to Washington was reserved for the late Gov. Brendan Byrne, who made a record 51 trips. “No one can take his place,” New Jersey Chamber of Commerce CEO Tom Bracken said. – Tom Bergeron/ROI-NJ

As the head of the New Jersey Chamber of Commerce, Tom Bracken has had the opportunity to meet and talk with Gov. Phil Murphy on a number of occasions.

At the Congressional Dinner following the Walk to Washington train trip, Bracken sat next Murphy during the nearly two-hour event.

Bracken said the opportunity changed his relationship with Murphy — and highlighted why he thinks the event is so valuable to the New Jersey business and political community.

“I have a very different feel for him having casually sat down and talked to him for a few hours,” Bracken said on the train trip back home. “You just don’t get that in any other forum. This isn’t like a business meeting, you’re talking about life, what you do, what are your hobbies. You learn really about the people, as opposed to what they are saying.”

Bracken apparently isn’t the only who values the opportunity.

Final numbers will not be available until next week — after all of the walkup registrations are processed — but Bracken thinks the trip may have attracted more than 1,000 people.

Bracken feels those who went got their money’s worth.

“I think, all in, this was one of the best trips I’ve been on,” he said. “The train was full, and it was full of the right kind of people having a lot of interesting discussions.

“The receptions were packed, and the dinner was the best dinner we’ve had. It was on time and the quality of the speeches was the best I’ve heard — and they were short.”

The chamber recognized the late Brendan Byrne, the former governor who made a record 51 Walks to Washington.

Byrne was recognized posthumously with the chamber’s business leadership award, which was renamed in honor of former Gov. Tom Kean Sr.

“I think the tribute we did to Brendan and naming the award (for) Tom Kean was very well received,” he said. “I know the Byrne and Kean families were very much appreciative.”

The event, of course, was about the networking. Something Bracken feels is becoming a lost art in the business community.

“With all the electronics, networking is like a dinosaur,” he said. “This is a throwback, the ultimate networking event, where you have to talk to people — you have no choice.

“I think the value of networking in New Jersey has been lost; this kind of brings it back. The people you meet you would never get a chance to meet and talk to in any sort of depth. And you get to meet them and talk to them in a casual atmosphere.”

Bracken said planning for next year’s trip begins next week, with a look back at the event.

“We’re always talking to people about what they think we can do to improve the train and the dinner,” he said. “So, it’s an ongoing process, but it really heats up about August and it’s a four- or five-month process. There are a lot of moving parts.”

“They are the people that really drive this thing,” he said.

Pursuit of politics: Youth still wants to serve — hear from...