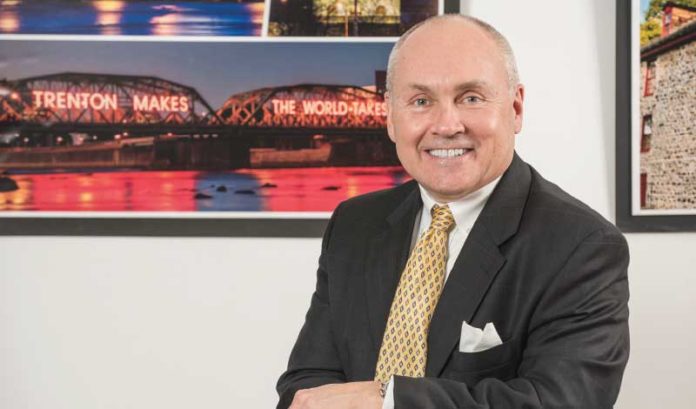 George Sowa is a veteran real estate professional. But, first and foremost, he’s a Trentonian.

His family roots in Trenton can be traced back to the early 1900s, when his grandparents immigrated to the city from their native Romania. So, even with all the years he spent in the real estate industry, it’s hard to beat that sort of history. It has something to do with him spending the latest chapter of his career pitching the city’s perks as Greater Trenton’s founding CEO.

But, recently, he’s finding the two worlds — the city he loves and the industry he spent his career in — are coming together like never before.

“There has always been a belief here that we have a city full of real estate demand, but now we’re starting to be able to point to some great examples,” he said. “There has been such revitalized interest in Trenton’s real estate market.”

That’s confirmed by John Hatch, who is a partner at architecture firm Clarke Caton Hintz and a partner at the renovation business HHG Development, both Trenton-based.

He said that, in his 30 years of experience in Trenton’s real estate market, there has never been more excitement about the city than there is today.

“This is a place that has certainly had its ups and downs over the years,” he said. “In the last couple of years, it has been different — there has been a consistent amount of interest.”

As an architect who has to uphold a certain level of confidentiality, Hatch couldn’t get too specific about clients looking into the city’s real estate market. He did say the business interest is coming from parties that have been strangers to the city for many years, and only now have expressed curiosity in the local market.

Much of that interest is looking to unlock the potential that accompanies Trenton’s industrial history — and the hollowed-out manufacturing structures left over from it. The industrial aesthetic of these buildings is sought-after, and, as Hatch explained, difficult to replicate.

“There’s a real thirst for authentic, solid architecture,” he said. “You can do great new buildings, but it’s hard to capture the feel and character of these historic industrial buildings.”

He gave examples of that in the city’s new Roebling Lofts, which HHG Development redeveloped as part of a larger update of buildings in the 100-year-old Roebling Wire Works site, a former industrial complex that has sat vacant for decades.

“In those lofts, there are these massive windows that would be seen as cost-prohibitive today,” he said. “There are all these features that add character and make for amazing spaces.”

The multiyear, ground-up redevelopment of these industrial relics was one of the first projects to be viewed as a shot in the arm for Trenton’s real estate sector, which had taken a back seat to residential and office park development focused on suburban zones.

“Up until now, in New Jersey as a whole, there’s been a relatively bad attitude about cities — that’s changing,” Hatch said. “We’ve had such a focus on the suburban sprawl. Now, there’s more interest — on the part of millennials and businesses alike — on more walkable communities, such as Trenton, which is a compact city.”

In light of the commuter-conscious trend, Hatch also sees it as significant that Roebling Lofts has easy access to a train station and a transit center. It could also benefit from a citywide effort to create a bike-sharing program, an initiative that is still in preliminary planning stages.

The 138-loft modern apartment building welcomed its first residents at the end of 2017.

“And, with its opening, we are well ahead of our projections for leasing, which I think really underscores the surprising strength of the market,” Hatch said.

It’s a realization of potential has been seen for a long time.

“From my point of view, the current real estate boom here makes perfect sense,” Hatch said. “We’ve got great transportation access on top of great building stock and everything else. I think it’s more a question of why this hasn’t happened until now.”

One pre-existing problem that Sowa’s Greater Trenton is reckoning with is the city’s blighted properties. In partnership with state agencies, the organization took on an $11.5 million Urban Blight Reduction Pilot Program to clear out long-vacant buildings and pave the way for future development opportunities.

“Part of this is about looking at sites and doing a deeper dive into the due diligence required to address problems that would keep it from being quickly developed,” he said. “We want sites readily available to be developed to meet the increasing demand in this market.”

Along with the expected increase in residential and commercial developments has been the expansion of institutional properties such as the downtown Trenton arm of Mercer County Community College. As part of an expansion of that campus, the college recently opened a three-story building called the Trenton Hall Annex.

What would have been the biggest real estate project of all in the city will not be coming to pass — a city-sprawling Amazon campus that Greater Trenton was instrumental in designing. The city’s pitch for the e-commerce behemoth’s HQ2 second campus had it planning for millions of square feet of development.

“While it was a bit of a disappointment we weren’t shortlisted for that — and we knew it was a long shot — there was validation in the exercise of putting this blueprint together,” Sowa said. “We presented a vision for the city to be developed in a way complementary to what’s here already. That helped people understand the city so much better.”

It was a feat enough to plan out such a transformative development project — and one unimaginable in years past.

But maybe not so unimaginable for a Trentonian.

“We have a lot of boxes we check in terms of desirable cities for real estate development; we’ve known it, but others are really starting to take that seriously,” Sowa said.

Changes at the top

Less than two years later, Jackson has said he won’t seek a second term in office, Flynn has announced his retirement from NJM and Franzini passed away after a battle with cancer.

There’s no doubt of the significance of this for Sowa’s organization, which was supported by these prominent stakeholders in its goal of advancing economic revitalization efforts in Trenton.

“But our organization was built to transcend particular administrations or even our own leadership,” he said.

The nonpartisan organization has a good relationship with the state’s new governor, Phil Murphy, and Sowa said that will extend to whoever takes the mayor’s seat in Trenton.

“We’re not slowing anything down,” he said. “Our purpose, our mission and the execution of it is unwavering.”